The main point of discussion for this week was always going to be the next stage of the land debate taking place...

..as on Tuesday evening, Ramaphosa came out to announce that the ANC had concluded that the Constitution of South Africa needed to be amended to explicitly allow land expropriation without compensation.

This set the cat amongst the pigeons, to say the least.

How could the ANC make a decision on this while hearings were still being concluded in the Western Cape?

Bottomline, the decision had effectively been made BEFORE persons had even had a chance to give their views on the way forward, let alone the fact that the submissions from the hearings have not yet been documented and reviewed.

Many took issue with this...

But there was more to the story than that - as we will review below - do join us...

First things first, our forecast from Friday showed the path ahead...

With the market at 13.19 at the end of the week, we were expecting to see the Rand push a little lower in the week before bouncing off support around 13.1628 with a slightly overall bearish outlook thereafter.

And in the week, there were a handful of key moments:

It was a week of two halves, as we initially saw the market move even lower to test the best level we have seen in 3 weeks...

...only for it all to come tumbling down on Tuesday evening.

It was a strange turn of events, really...

President Ramaphosa announced that the ANC had concluded that they need to amend the constitution to explicitly allow for expropriation of land without compensation. And next thing, the Rand was sitting nearly 20c higher. So, obviously, the announcement of the Communist plan going into action, sent the Rand that high?

Well, there is more to it, as shown here: 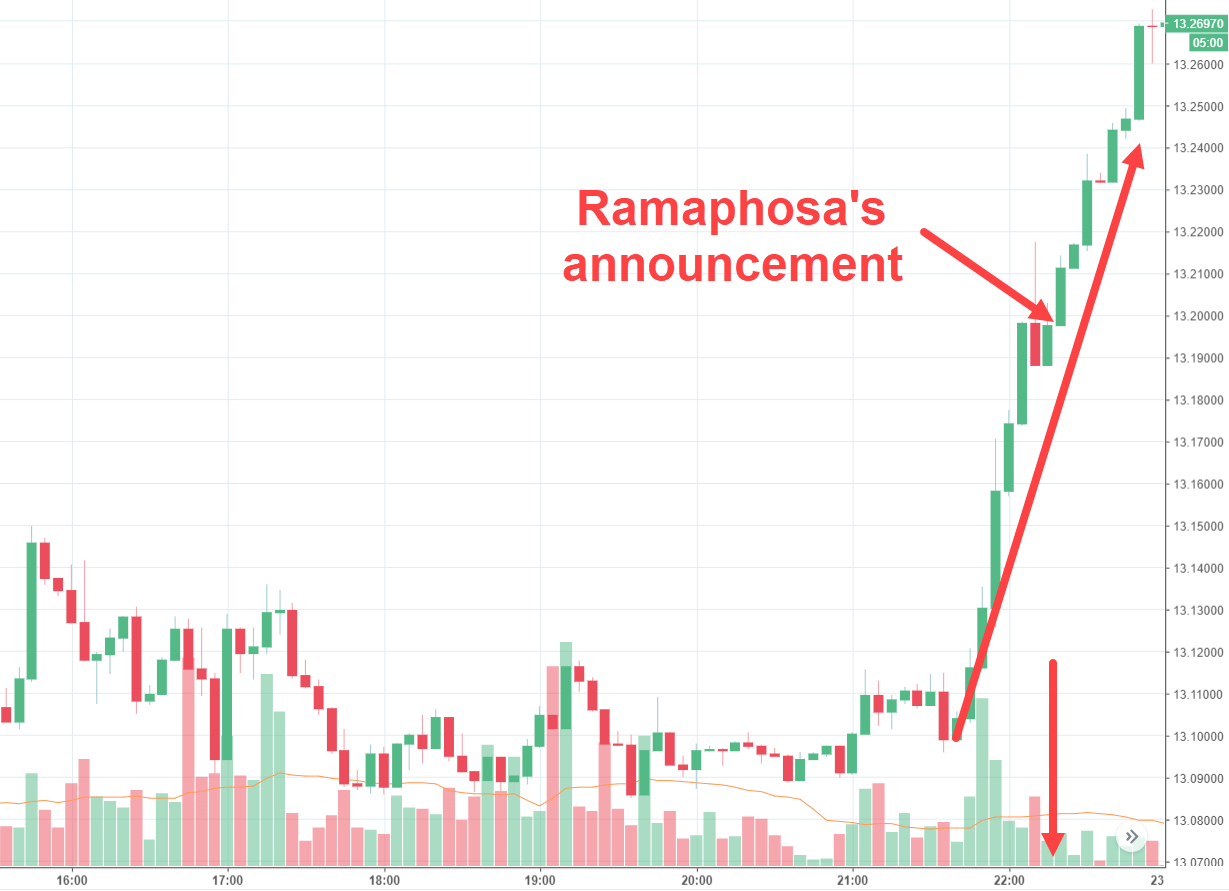 So, the market had already weakened 10c BEFORE Ramaphosa even went live with his announcement.

Economists will say it was the announcement, but in reality, it was just a trigger for the market to go further.

And go further the market did.

It was an unfortunate situation - the Rand had actually moved much as we had expected, dipping down to make a low of 13.08 before reversing direction and heading higher.

One of the other things which came out of Ramaphosa's announcement was the news pieces on the way that the event was handled by SABC.

Not for the first time, questions were asked around how this happened at such a strange hour of the night, with seemingly no other broadcaster getting access to the same content. Reminiscent of the Zuma years...?

There was plenty of other news on the go too.

Here are a few other newsworthy moments:

But once again, the market had reversed prior to the announcement, and the news release just provides some extra impetus for a move back down around to R13.30...

So all in all, not a bad week, with the Rand having clawed back a fair portion of is initial losses for the week, and lived to fight another day...


So, another week dawns, and where to for the Rand?

And with not too many local economic event triggers this week, it will be more a question of what is happening on the international front, while of course the Expropriation Without Compensation debate keeping uncertainty at a high.

Our analysis is showing a fairly clear picture for the foreseeable future, but as it is with any forecast, this is a question of getting the best picture based on the data available at this point.

Overall, it looks like the Rand may have some tricks up its sleeve this week,

Why don't you join us to see how the market pans out based on our analysis?

...And see how this could benefit you in making informed, educated and rational decisions.

And at no cost - risk free

Use the button below to test-drive our forecasting system yourself for 14 days free (no credit card needed) - and tell us what you think.

Alex Paynter
« Previous Post A return to R13/$ as the Rand trend turns again? Next Post » Mayhem as Rand busts through R14/$!