Another week on the front foot for the Rand, as the global market took a turn for the worse.

It appeared as if many months of uncertainty with the Trade War were finally taking effect to the point where the Federal Reserve could no longer deny it.

And yet, this was following some strong showing from the US Non-Farm Payrolls.

Which does not really make sense, logically, as SA's market relies on the global economy...

...but let's look into the deeper detail of how it all happened.

Here were some of the biggest headlines from the week:

On Friday, the US had created 224k jobs in June vs the 160k expected on Friday. The strong data threw the cat amongst the pigeons, as markets now question whether the FOMC have enough evidence to justify an immediate rate cut.

It was going to be an interesting week, with Fed's Powell testifying to Congress likely to give us some insight into where things stand in the global economy.

And Monday came with some warnings as to the global economy. Deutsche Bank announced 18000 job cuts, as they battle to save a sinking ship. They are going to exit the equity business and return to their German roots...

...a radical change, perhaps giving some clues as to the position of the banking industry at a whole. (Roll on the cryptocurrency revolution?)

And Jerome Powell echoed some of economists expectations in his testimony, with emboldened market expectations of an inevitable interest rate cut at the Fed Interest Rate decision, and said that the US Jobs data had not changed their view on cutting interest rates.

So, it would appear that it is time to mark your calendars for this: 30-31 July.

Markets around the world reacted on Wednesday to this news, and after being flat on Monday & Tuesday, we saw a big move on Wednesday take us down to R13.85/$ by Thursday afternoon - the best rate we have seen for the Rand since February! 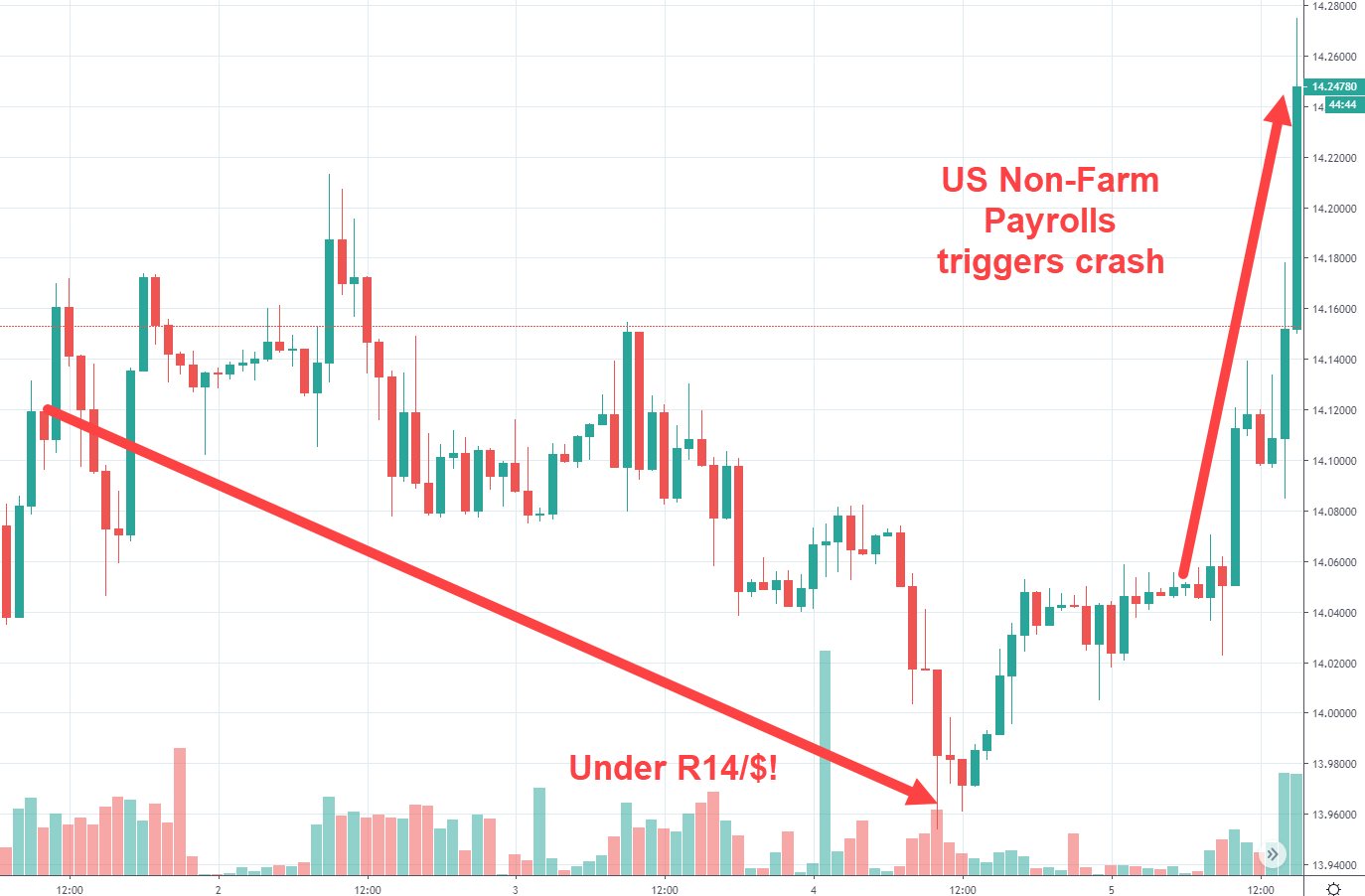 The news is seen as Emerging Market positive - but don't be fooled.

This was a trigger for the markets to move after a couple of quiet days...

...and beware of the chance of a "Buy the rumour, sell the fact" approach that comes about with these expected economic results! The safest way is to trust the Elliott Wave counts, which are reliable in giving market direction...

The Rand then closed Thursday under R14/$, on top of the Dollar once again!

In other news, here were some of the big headlines:

Friday brought some more price action for the Rand as we saw a move back up to R14.04, before the market strengthened after the SA close to end the week back under R14/$...

It had been quite a few days, and while a little jittery, a stronger week for the Rand with 20c gains!

Well, after another eventful week, what does this week hold in store?

The Rand has started the week on a good note, continuing where it left off on Friday week, pushing stronger against the Dollar, Euro and Pound.

Apart from political and global tensions, this week has some potential economic events that could provide triggers be market movers, the most important being US Retail Sales, Fed Chairman Powell's speech and SA Interest decision.

It seems that the Rand has been almost unstoppable the past few weeks, but we know in this market that trends of any degree never continue ad infinitum.

And that is the beauty of analyzing with the Elliott Wave Principle, which is the study of irrational yet predictable human behaviour in financial markets.

And by analyzing these sentiment patterns together with our unique combination of momentum, time and price-relationship studies, we are able to come up with where this sentiment is likely to take the market - in smaller and larger timeframes.

Being able to answer these questions allows you to make decisions ahead of time, based on an objective outlook...

If our latest analysis is correct, we are in for an interesting couple of weeks, which will likely take many by surprise.

Why not join us free for 14 days - and get a look at what we are talking about.