Firstly it was a turning of the tables, as the Rand overcame a number of key issues at home to rally hard against the Dollar!

And with some (apparent) bright news out of the darkness of Eskom's load shedding, we nevertheless saw the Rand grab back 40c against the USD.

The Dollar had a rotten first half of the week, as investors worldwide gave it the boot, sending it weakening against all of the majors.

This came with signs of the global economy slowing (is this good or bad news for the Rand?)

Let's get into the full review...and how our forecasts predicted that it would all happen BEFORE the news hit!

First things first, our forecast from Friday's close (15th March), which gave the outlook to our subscribers for the next few days. It showed that the expectation was for the market to top out shortly in the R14.42 to R14.87 area, before breaking lower toward R14.2243.

Now all we had to do was to watch how it played out...

And right from the start of the week, it seemed impossible from a logical point of view that the Rand could strengthen...

...there were some big talking points during the week, but none more so than Eskom.

All the worms were starting to come out of the woodwork, as Stage 4 Load Shedding was announced for Monday and Tuesday, taking business disruption to a whole knew level.

Pravin Gordhan did not seem to have any answers at all, saying that "Stage 4 load shedding is unacceptable, disruptive to economy". Yet, that is what the situation is...

As another Eskom official said, “How long? Frankly…I can’t tell you when it will end...we’ll have a better idea in ten days, two weeks’ time…”.

Things are looking rough, and Eskom officials are planning for Stage 5 or 6 load shedding, which would take it to the next level.

This is as a result of a combination of outages, unplanned breakdowns, planned maintenance, lack of diesel and more...

The future is uncertain, but expectations were for some clearer timelines to emerge over the next couple of weeks.

Not all that much. The market triggered with this and the Brexit furor to break over R14.50, now right in the middle of our target area. 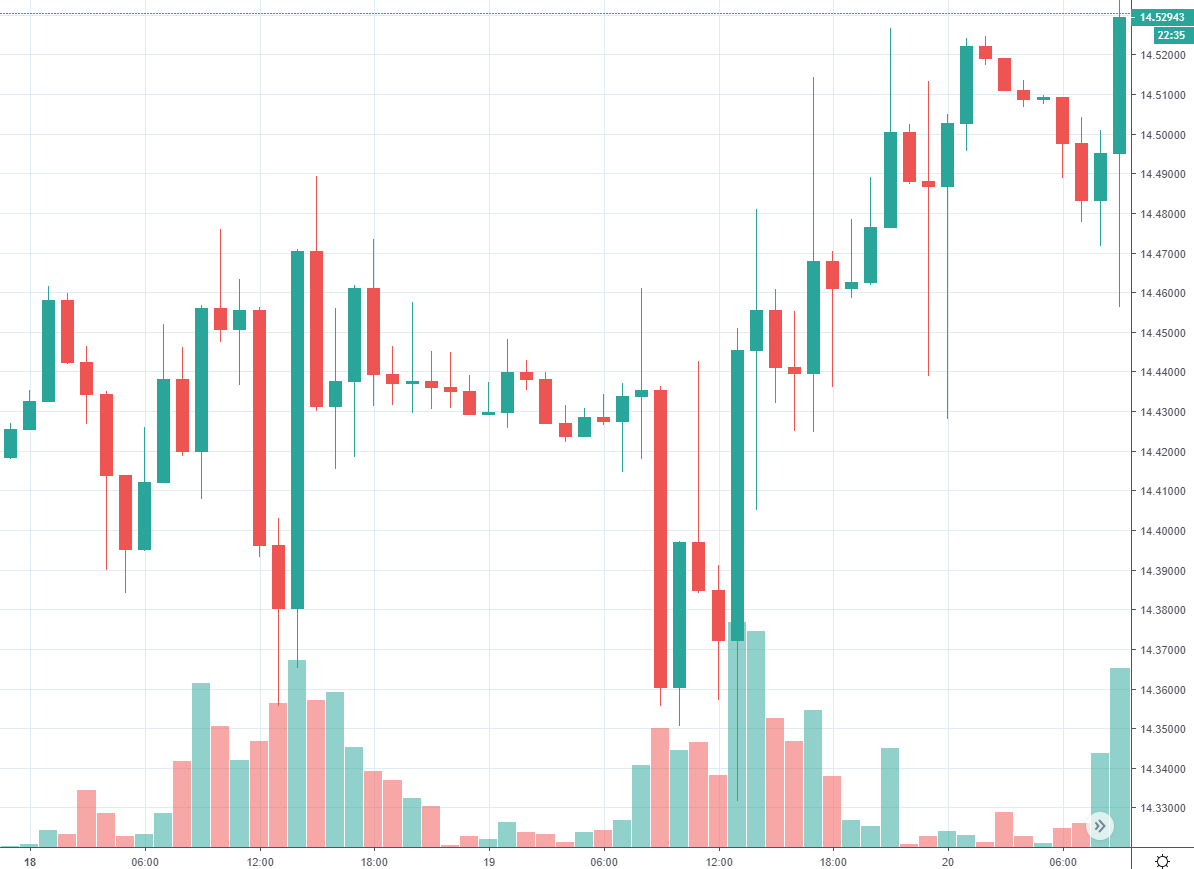 Brexit's latest happenings were Theresa May's 3rd Brexit deal being shot down by parliament, leaving her all but out of time. She began to seek an extension of 3 months, to which the EU said was too short, and suggested that it was pushed out to 2020...

...who knows what another year of uncertainty could do for Britain and the EU

But then it was the big event for the week - the Fed announcing Interest Rates in the US.

And this was when it turned for the Rand.

The markets were triggered dramatically in reaction to the news of the US Interest Rates not being increased this whole year. Fed Chair Powell advised that a weaker economic picture was in view for 2019 for the US - resulting in significant spikes in forex prices across the board, with the EUR/USD and Gold bouncing hard off of the news, and sharp reversals from the Rand against the Dollar, Euro and Pound.

EXACTLY in our target area in the forecast from Friday...coincidence?

No, rather the power of Elliott Wave analysis.

Suddenly the week looked a lot different for the ZAR, turning the tables on the USD to hit R14.15! 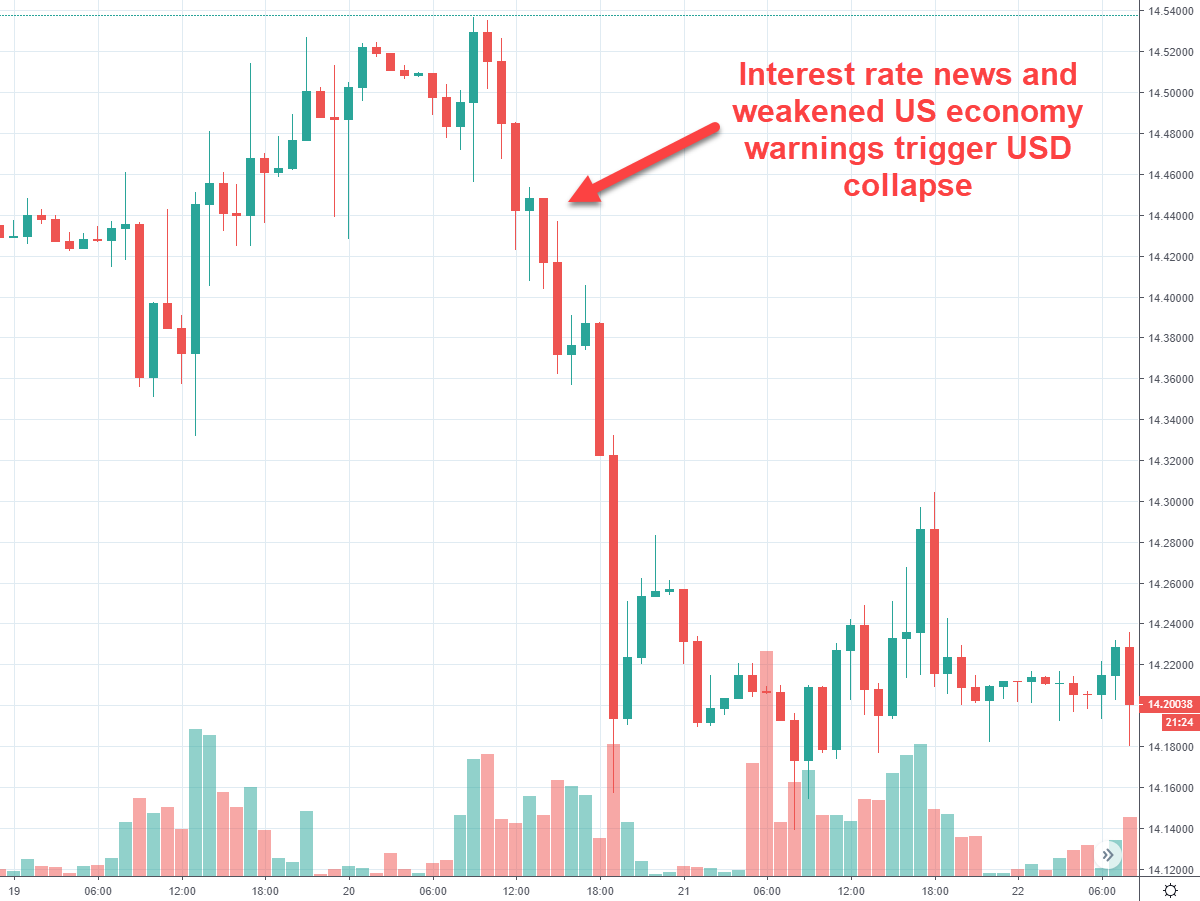 There were some other big talking points from the week, such as:

Well, after there being such a great turnaround for the Rand, things went a little pear shaped at the end of the week.

Theresa May got her Brexit extension (only to 22 May - a chaotic Brexit still looms) which meant a big finish to the week on the UK front, but the ZAR took a pummeling, as it hurtled back towards R14.50 to the Dollar...before halting there...


As we hurtle into the last week of March (yes, March!), there is plenty enough action to keep the markets on their toes...

Internationally, we have the ongoing Brexit saga to watch, as the soap opera continues with no clear end in sight even as the deadline looms....

...and then, of course, there is Trump, who continues to make headlines as he halts additional North Korea sanctions, is largely cleared in the Russia collusion investigation, and keeps the US-China trade war simmering.

But as far as the Rand is concerned, it is locally where most eyes are focused, as two big economic decisions take place this week:

These could provide triggers for some significant moves, based on their outcomes.

From an Elliott Wave perspective, there are two possible scenarios playing out based on the two most likely wave counts. Instead of looking at the news itself for direction, we will be watching how the market moves this week, especially the validation levels for each of these,