And before you can blink an eye, a quarter of the year has already slipped by...

It has been a strange year so far for the Rand - a real mixed bag with momentum swinging one way and then the other, particularly versus the Dollar.

Having started the year with the Rand on the ropes at R14.50+ to the Dollar, we saw a huge recovery during the month of January as the Rand closed out around R13.20/$.

And then things turned a bit pear-shaped, as February and March have not made for happy reading.

February saw the Rand back over R14, and March saw a push back above R14.50... and then as we headed into the last week of the quarter, all too suddenly the Rand was touching R14.75...

...only for it to turn the tables on the Dollar from Thursday onwards.

The question remains though: can the economic issues and Eskom problems be overcome? Will the impending global recession hurt or harm the ZAR?

These are all questions we have, heading into April of 2019...but let's start with the review of this last week.

It was going to be a huge week for the Rand, with some of the most important events for months all lining up in one short week:

With all these balls up in the air, it was going to be a difficult week to call.

And while economists, investors and businessmen were anxiously analyzing possible decisions and their likely outcomes, we instead just focused on the patterns of sentiment and how these were likely to play out.

Our analysis on Friday showed two possible wave counts with equal bias, one showing the market had already topped out, and the other being for a last push above 14.69 before doing so (per chart below)

It was simply a case of merely watching our validation levels to confirm which scenario played out - and see how the week panned out.

But it was expected to be a humdinger week for sure!

The most important of decision's was the big call from Moody's on Friday...

Leading up to the decision, economists were absolutely split. The overall view was that SA may just be able to pull through without being downgraded, but it was going to be another tight call. Economists were divided in opinion, and the markets were jittery.

It did not help that this was also the week of the SARB Interest Rate Decision - another event squarely in the crosshairs of the ZAR.

And just when you would think that would be all, there was the Brexit debacle...

And Theresa May finally threw in the towel: "I am prepared to leave this job earlier than I intended in order to do what is right for our country and our party."

...much to the delight of many. Her handling of Brexit has been a shambles.

For the duration of Wednesday the 27th, just 2 days before Brexit was set to happen, Parliament debated extending the date of departure. It was said to be a formality already, due to the EU having put their stamp on it already.

Yet, despite it being a formality, they were not able to get anywhere through multiple debates, proposals and votes.

Wednesday afternoon saw the Rand push higher to hit 14.67 - its worst level so far for the year.

And while this brought anxiety and concern for many (fearing this being the beginning of the end for the Rand), for us, instead, it brought a smile...

....just in time for our Wednesday short term forecast update.

And this is the very clear picture we provided to our clients - a push still higher in the 16.67 to 14.96 area before topping out and falling sharply below 14.27.

That was quite a bold prediction with both interest rates and Moody's decisions still to come...

...but that is what the patterns were saying - and quite clearly too.

So how did things play out?

Well, as can be seen from below, pretty much to a tee.

Initially, as predicted the market edged up through Thursday morning to hit a high of 14.75 before reversing sharply below 14.70 by the time the interest rate decision came...

...which was to keep rates on hold (despite there being room for a small cut)...

...and all this did was provided a trigger for the market to continue southwards - confirming a topping out right in our target area (which had happened prior to any news): 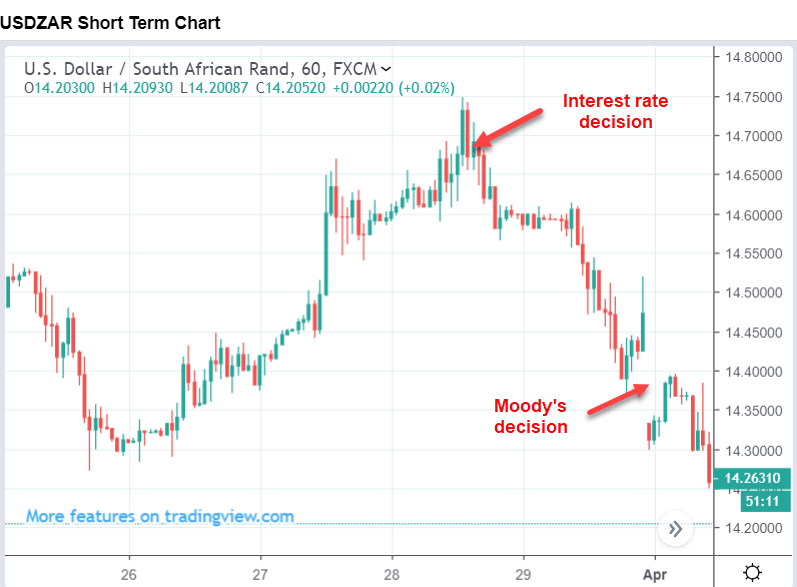 And then it was a case of waiting for Moody's decision, which was delayed, and therefore didn't arrive before the market closed on Friday, by which time the Rand had already recovered 30c off the worst rate for the week.

There were plenty of other big headlines which our attention:

And that was that for a roller-coaster week which had panned out pretty much as anticipated.


Monday opened bright for the Rand as Moody’s giving Ramaphosa a lifeline by keeping SA’s credit rating at a BAA3 stable outlook...

This gave the Rand an added boost as it headed further south to break below 14.20 - over 50c recovery in just a couple of days!

So where does that leave us for this week?

Well, we have some big market triggers this week, with US Non Farm Payrolls topping the list on Friday.

And the latest Brexit Update: After last week’s eight rejected proposals, UK MPs are set to vote again on various options, with the extended deadline of the 12th of April drawing nearer.

As far as the Rand is concerned, based on our updated analysis, we are in for some very interesting days and weeks ahead, which will catch many off guard.

Last week has shown how imperative it is to have an objective view....

...if you have Rand exposures, just imagine how having the above forecasts last week could have saved you in money ... let alone the time and stress?

The alternative of flying blind without instruments is fatal!

The best we can do for you is share our roadmap for where the market is expected to head the next few days weeks and months ahead - for free.

Simply join us today and give our 14 day free trial a shot.

Appreciate your feedback and thoughts.