Rather a sorry week for the Rand... Election jitters, Eskom and a stronger USD made for poor reading...

The clock is really ticking toward the finale of election time for the ANC, DA, EFF and more...and jitters as to the potential outcome abound.

The thorn in the ANC's flesh, Eskom, continued to produce more worries and unknowns. You would think that this would have to dent some of their support...

...but expectations are for this to make little to no difference to the end result.

The Rand took pain with these tough conditions, soaring oil prices and a stronger Dollar too...

...and then turned it around to finish strong right at the end of the week.

But let us get into the meat of this review to see how the market performed through the shortened week...

Here's a handful of the biggest events of the week:

Well, it was quite a week - and I am not quite sure where to start...

But perhaps where we can begin is on the global scale - where the US Dollar took charge this week.

Poor German economic data seemed to provide the trigger for the DXY exploded higher, touching over 98.1 - and along with that, the Euro, Pound and Yen also lost ground against the USD. Along with that, went the Rand...

...which is interesting, because many persons said that the Rand weakness (spike as high as R14.55/$), was as a result of the Eskom bailout.

What many persons do not realize is that local factors play a far smaller role than they are made out to. The USD drives the market globally, with far more trade and influence than the Rand will ever have.

Sure, sometimes you will find that local events trigger a move. But, in general, it is Dollar weakness or strength that really makes things happen.

Whatever the case, the charts did not make pretty reading for those banking on ZAR strength: 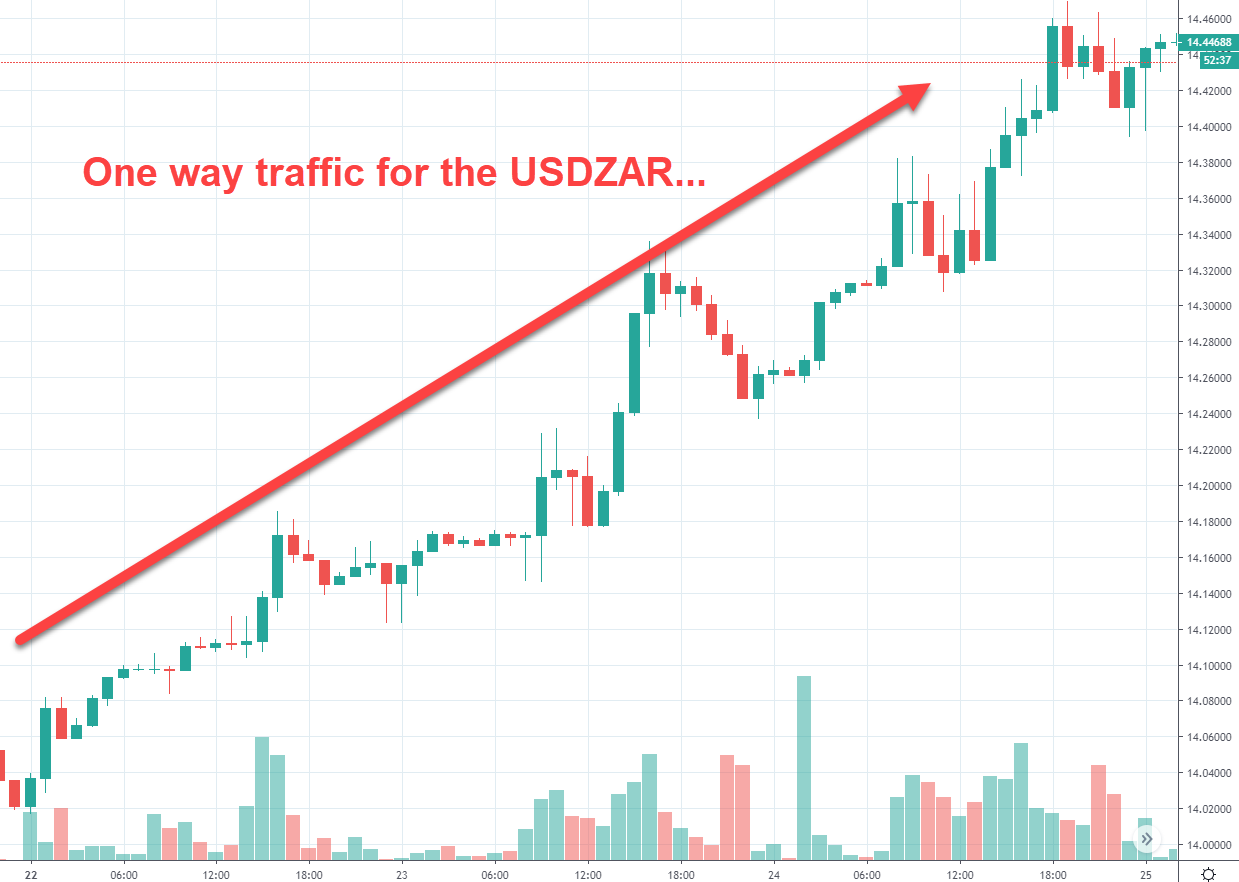 A lot of the movement actually came on Monday, a public holiday - and this was just following the Eskom R5bn bailout news. However, there was so little volume, it would be really quite impossible to say that there was a mass outflow of investor funds following the story breaking. And this is why we cannot look to news for market movement - otherwise all we find is confusion once again! A strategy in these volatile markets is a must have.

In other news, US President Trump has blocked the purchase of Iranian oil which triggered a nice move on Oil, following the massive sell-off. This sell-off had taken it to $49 a barrel in late 2018, but the market had then reached a turning point where everyone was negative - and then it was primed for reversal. Anyway, this trigger took the price to a 6-month high of $75 per barrel.

One thing is sure, petrol prices are not going to be sustainable if this oil boom continues.

And SARB will be watching that inflation rate very closely, when those new prices for petrol are released.

Following all of this, the Rand continued its collapse, pushing higher to hit R14.55 to the Dollar, and testing some key resistance levels by mid-Thursday...

And these were some of the other headliners from the week: 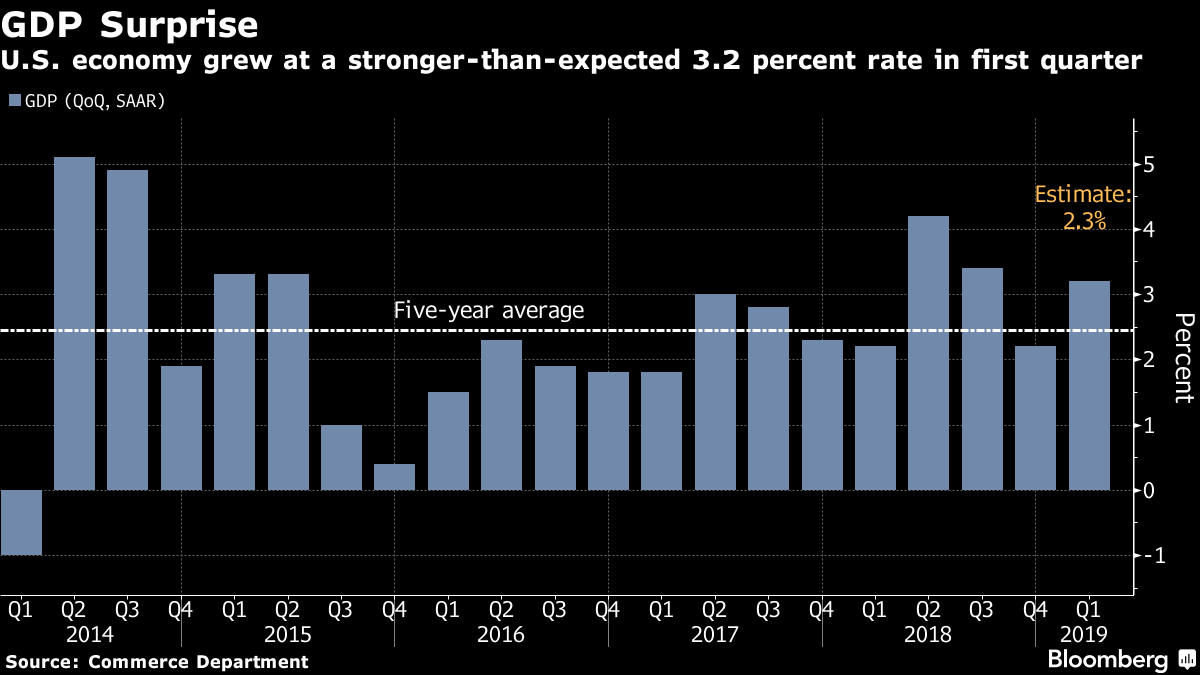 This is alongside expectations from SA analysts who are tipping a drop of 1.1% of the SA GDP...

...so surely the Rand would have collapsed with this news?

Well, contrary to expectations, our forecast from Wednesday had suggested we would top out shortly...:

And that was just what happened after the market hit 14.55... 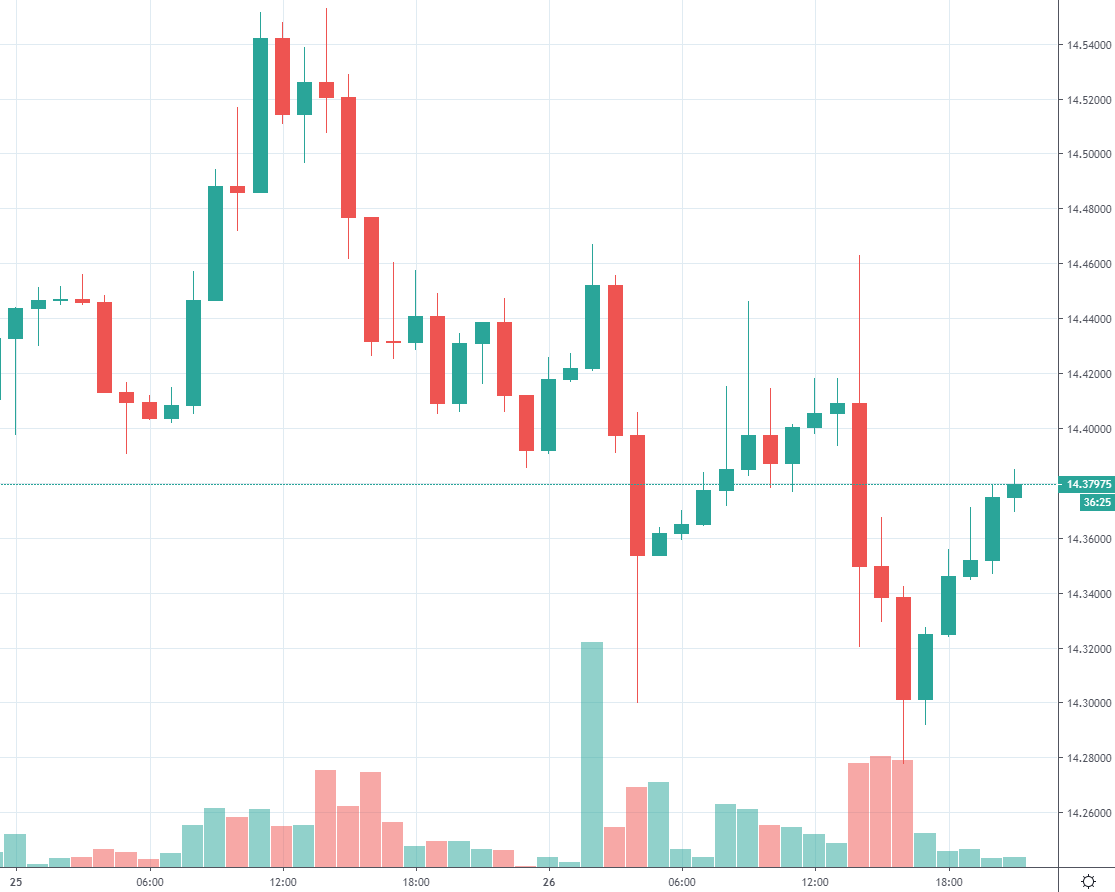 Try make any rational sense out of that one, economists!

And so the Rand enjoyed a better end to the week than it looked like it would have, and in so doing had followed our forecast from Wednesday of topping out between R14.41-14.56 perfectly.


This week is a humdinger, with a slew of high impact data releases internationally, as well as a final countdown to elections next week locally.

With two interest rate decision (by the Bank of England and US Federal Reserve) as well as Non-Farm Payrolls, it is going to the international events that are likely to provide triggers for some significant moves.

So where to for the Rand?

Well, per the above chart from last Wednesday, the market has reversed nicely in our target area, and we are now watching key levels to confirm the preferred wave count.

And once again, if the current wave count plays out, the Rand's moves over the next few days and weeks could take many by surprise (as can be seen from Friday's update)...

...this is certainly not a time to manage your Rand exposures without a proper roadmap and a strategy (plan of action), so that you can prepare and take action at the right time, instead of either:

That is why I want you to be prepared!

And why I would urge you to take advantage of our 14 day free trial today (no card needed).