With the Rand on the ropes (with Eskom slumped by its side), it pulled off a major comeback week to strengthen over 3% in a few days to break well below R14.50 once again.

Relief for importers had arrived.

From SONA to Eskom to Iran, it was quite a week...

Let's get into a full review right away ... and show you how you could have seen this all coming!

Before the momentous week even started, our forecast was issued to all of our clients on Friday the 14th of June, giving the outlook for another important few days:

The expectation from our preferred wave count (see below) was for the market to fall sharply, targeting the 14.52-14.33 area (the alternate count showing a final thrust above 14.9337 before doing so). This was some way off from the rate of R14.80...if this was to play out, it sure was going to be quite a week!

And it sure was, with a horde of events taking the headlines:

The Rand opened the week a touch under R14.80/$, and enjoyed a quiet public holiday Monday, staying stable through to Tuesday morning.

Tuesday brought the first action for the week, as the Rand cruised to an early 'lead' in the week, breaking its sideways trend to bolt the gate and and gallop down to R14.50 by mid afternoon!

A PERFECT validation of our forecast from just a couple of days before.... (see above)

Economists were confused... "The rand reveled in a positive risk environment yesterday, even though the questioning of the SARB’s mandate and political infighting are still top of mind locally."

The Rand's movement seem contrary to logic - and it was - but logic never has worked to predict markets! 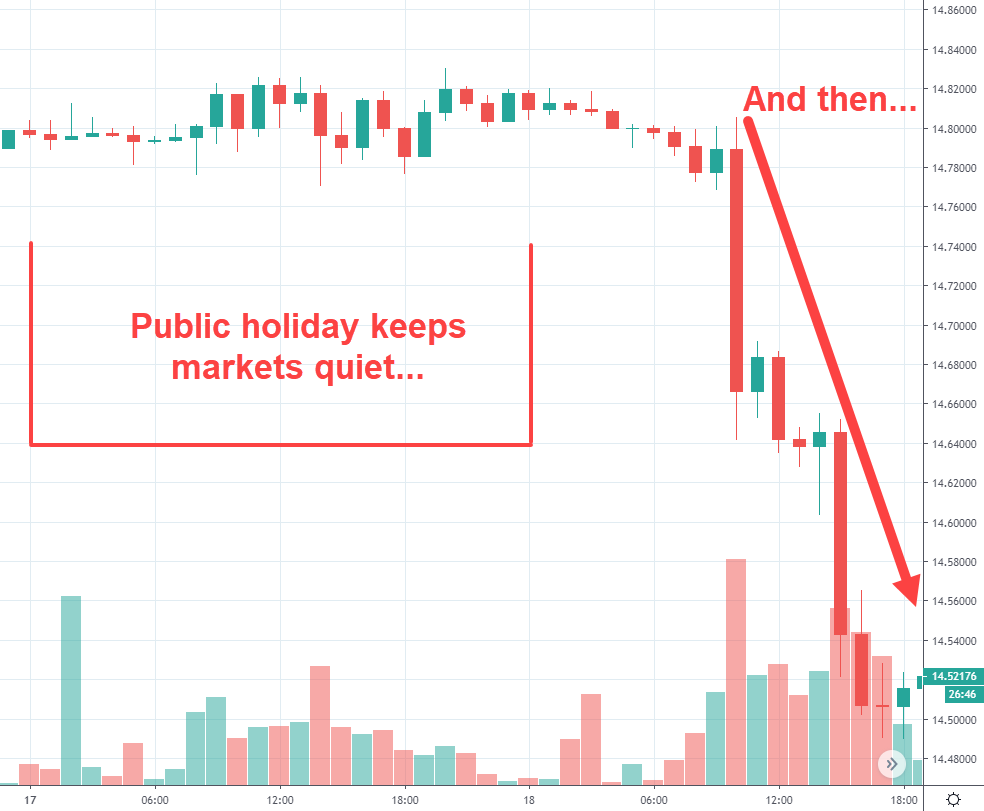 You can only look to an Elliott wave count to pick up a move like this before it happens.

And then it was onwards to Wednesday...

...which was when the rand really joined the party as a flood of positive news triggered more strong gains.

The ECB (European Central Bank) and US Fed lined up to promise new rounds of ‘fiscal stimulus’ (i.e. pumping more cash into the beleaguered world economy), sending markets into a drunken risk euphoria.

Along with that, the Fed kept interest rates steady, and said there was a case for potential rate cuts later this year...

...things were hotting up nicely!

And as for the Rand, it appeared to be LOVING this surprise news...except for those of us who the forewarning that sentiment was about to turn positive!

We released our updated Short Term forecast on Wednesday afternoon, with the Rand expected to gain still further, targeting the R14.23-13.97 area before bottoming out in the short term (our Near Term forecast was also updated):

But as for the Rand, it simply followed our Wednesday forecast perfectly, as we had broken into the new target area before bottoming out below 14.20 and heading higher above R14.40 ...

Well, after putting in its best week's performance in about 9 months, can the Rand capitalize on this momentum into the next week?

As far as economic data triggers goes, we have US and SA trade balances coming out, but then we also have political tensions with US-Iran as well as the ongoing Trade War games that could provide some volatility.

Not to mention the local SOE mess and its implications.

But these events will never give you direction. It will be the underlying sentiment that does. And that's all we bother about looking at.

In fact, as we saw last week, we had a picture perfect situation of seeing where the market was expected to head - before any news hit at all.

This allowed us and our clients to make decisions ahead of time, based on an objective system - not based on gut feel, emotions or rational fundamentals.

It has been satisfying to see the market moving in line with our latest short term wave count, and the latest week's move have also all-but confirmed our preferred larger degree wave count.

To get a look at what we are talking about, simply click the link below.