Pressure has continued to sap the life out of the ZAR, as we see another week hovering in and around, and eventually over the R15/$ mark.

With a storm of both local and global news really causing hassles, the question on everyone's lips was how this trend was going to turn around?

Well, one thing we have learnt is this: don't look at what meets the eye in terms of events to see where the Rand is going.

Time after time, we see the market react EXACTLY the opposite to what you would expect.

Don't rule it out from happening again. Stick to the wave patterns.

That being said...let's take a look at some of the news from this last week.

And once again, it was a week of big events. Here were a few of the headlines:

The Rand opened around R14.90 to start the week...but as it turned out, we would not be there for long.

On Monday, Moody's gave us the first bit of insight into how they were feeling as to South Africa's economic situation - and what we could expect come the next investment grade rating decision.

...meaning 27th of March has become rather a D-day for SA. By then, Moody's has to make a decision on whether it is junk status or not.

And investors did not react well to this. The Rand spiked higher Tuesday to touch back over R15/$. This confirmed our count that we would then be heading higher to R15.17... 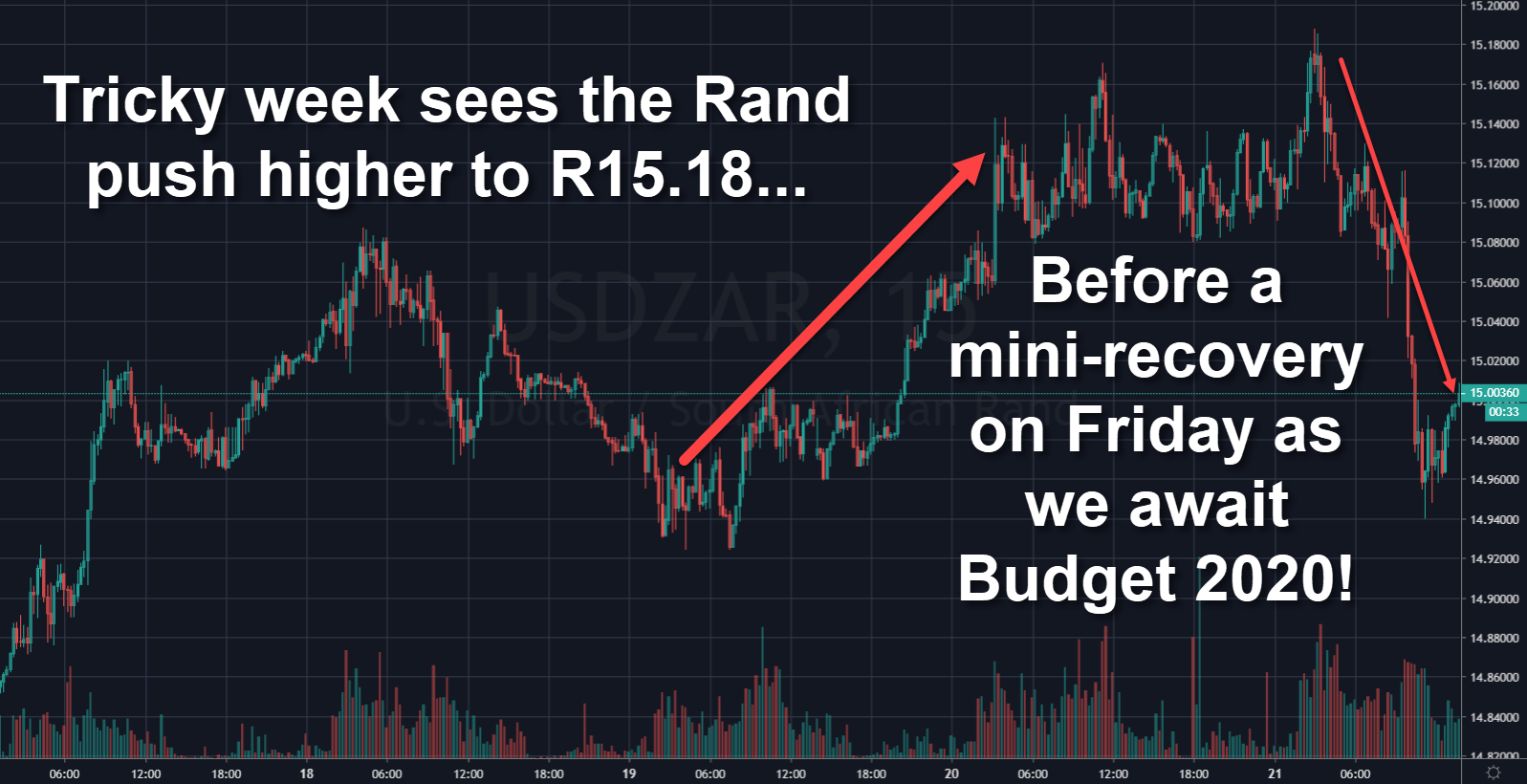 It is worth remembering that foreign investor sentiment is crucial to the country, with foreigners already holding 40% of SA bonds. These investors place huge store on the view of a company like Moody's, and while it is a risk/reward situation, when the risk outweighs the reward, the investors are only going one direction.

But the next stop for Moody's is on the horizon: Tito Mboweni's Budget speech

This will outline the nitty gritty of Ramaphosa's plans from the SONA, and how the numbers stack up, which is really what Moody's pays attention to.

All expectations are for a damage control speech, with Tito doing all he can to avoid the Moody's downgrade. Will he be honest or will he avoid the difficult subjects is going to be the question?

Honesty is the best policy for sure, but some subjects become fairly uncomfortable if you are trying to avoid a ratings downgrade!

In global news, here were the top headlines:

As for the Rand, after a really rough week, breaking as high as R15.18 on Friday - as per our forecasts from the previous Friday, as well as from Wednesday & Thursday- we then saw a change of fortune on Friday afternoon!

With seemingly no trigger, we saw the market push 20c during the course of trade (even after SA market hours) to hit as low as R14.93!

But once again, the market patterns anticipated this - before it happened...without looking for any reasons whatever, as shown in Thursday's update below which we had issued the day before... (click to enlarge):

Proving what we started with in the summary...such is the name of the game in the markets.

As we turn to look at the coming 5 days, there is promise of a massive week ahead for the markets...and we would advise strapping in for the ride.

Ahead of us we have one of the most anticipated events of the year: Tito Mboweni's 2020 Budget

And directly after that will be the aftermath and analysis, followed by Moody's 'Junk' decision either on or before March 27...

...but this budget will give us a good idea of how bad the damage is, and whether it will just be an obvious, instinctive decision to downgrade, or if it will be a case of one more chance?

Other events in the markets are all lower key, but SA's PPI & Balance of Trade, US Durable Goods orders, and a few others will also be watched.

So where does all this leave the Rand?

As for us, most of all, we will just be watching the Elliott Wave Patterns as they once again called the moves this last week.

So it promises to be a big week...strap in!