Another interesting week for the Rand passes...

And what made it really interesting was how the Elliott Wave Principle telegraphed most of the week's moves before they even happened!

The global news and SOE troubles continue to dominate headlines, keeping the markets volatile and investors on their toes.

Yet, all in all, the Rand ended in the 'green' - stronger than where it began.

And the question is, as always, where are we going from here?

Let's get into the full review & look forward!

The already weakened Rand began the week rather shaky over R15/$...

But our subscribers had the way forward mapped out with our forecast of 7 February, giving them the roadmap for the week ahead. While there was a chance of the Rand pushing a little higher to touch R15.12 again, it was due to top out shortly, heading lower toward R14.94 and below... (see below & click to enlarge)

It was an interesting few days which followed...

...and here are some of the biggest events (triggers) from the course of the 5 days:

And right from the go, the Rand was on the move lower...as per our forecast.

Then, thanks to the swift moves, we issued another forecast on Tuesday, ahead of our normal schedule for Wednesday, in order to keep our subscribers up to date.

It showed us at R14.9013, with the expectation for the market to break lower into the R14.89-14.73 target area before we would then see the market retrace higher…(see below - click to enlarge)

And so the Rand continued, with the first half of the week seeing the market make it's way down lower, hitting a low of R14.73 early on Wednesday morning...

On upwards higher we went, as per predictions!

It was a real rollercoaster, but the market was behaving according to the Elliott Wave Principle - as it very often does...

Wednesday brought our next forecast, which has also been accurate thus far...but this one is exclusively for subscribers. To get a look at our latest predictions, grab a 14-day trial over here. On the house.

The build up of the whole week was toward SONA...

Ramaphosa's most difficult assignment yet, as he tried to balance between the Eskom situation, the urgent need for growth, the need to make hard decisions, SAA, and much more...

With SA’s fiscus in steady decline, the 2020 Budget scheduled in two weeks will be closely monitored by investors (and, more importantly, Moody's).

With the 2020 Budget around the corner and Moody’s credit rating decision at the end of March, it has to be a stellar performance. A rating downgrade may be on the cards should National Treasury not announce large reductions in spending forecasts.

As for how the SONA went...well, what would a SONA be without EFF interruption?

But after the usual shouting, fighting, and general nonsense, Ramaphosa outlined some key points:

As always, it will be a question of "walking the talk" - many things get said every year, BUT how much actually gets done?

(What a contrast with US President Trump's SONA of last week...)

So while Ramaphosa attempted to deliver a motivational speech, balancing between reality and possibility/potential, many South Africans (and likely Moody's) are going to be waiting for Mboweni's budget speech. He has a way of getting into the nitty gritty very quickly, and being brutally honest - as well as providing the nuts and bolts as to how everything is going to work out.

In an unusual fashion, the Rand was calm as Ramaphosa outlined his (honest but overly optimistic) plans to resolve the grim state in which the country finds itself... 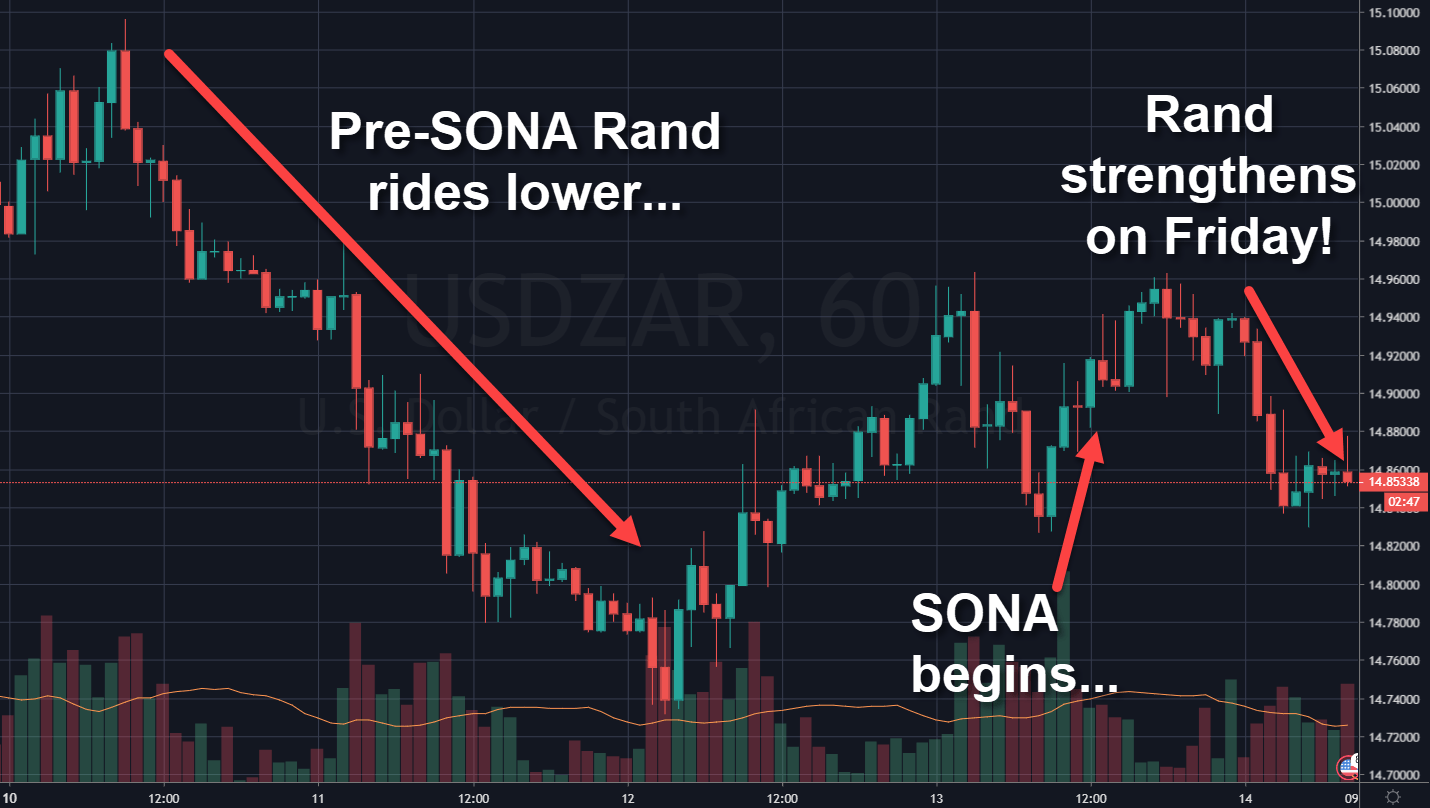 What a contrast to previous SONA's, in which we saw wild swings from the ZAR...!

Once again proving: events are merely potential triggers …NOT direction-givers.

And that brought us to the wrap, with the Rand easing its way to the close in and around R14.90...

It had been a really up and down week for the ZAR...but all in all, it ended slightly stronger than where it began.

And as we head into the second half of February, there is not much in terms of economic data to provide potential triggers, with US FOMC and ECB meeting minutes being two that will likely be the most scrutinized.

But there is plenty to keep the market on its toes, from ongoing Eskom woes, to digesting Ramaphosa's SONA last week, to determining the global effects from the developing coronavirus epidemic.

And, then of course, there is the anticipation of Mboweni's Budget speech (26 February), which Credit Rating Agency Moody’s will watch closely as they prepare their next review for the 27th of March.

Where does this all leave the Rand?

Well, it has enjoyed a better week than last, but risks still abound. We have a couple of potential Elliott Wave counts that are playing out, with some key levels to watch.