One of the most brutal weeks has come and gone, leaving global markets - including the Rand - in tatters.

It was a week of promise - one looking forward toward Moody's Investment Grade decision...

...and by the end, the wind was truly out of the ZAR's sails.

This is the worst level we have seen against Dollar & Pound since 2016!

What a far cry from the beginning of this year, when the Rand had pushed to its best levels in 6 months...

...but since then, it has pretty much been all one way traffic...!

But let's get into the full review, and see if we can gain some insight into where the next volatile week is going to take us!

The biggest talking points for the week were the following:

In essence, from the Rand's point of view, the week was all about the budget...

And the Rand's approach to the time when Tito began speaking was some of the most interesting to watch. We saw markets open around R15.06/$, after having closed Friday just below R15.

But that was just the start, as we saw steady losses as we marched toward the budget, with the Rand eventually reaching R15.34 in the hours before the budget began.

It was jittery times for the markets as we awaited Tito's solutions to some of SA's biggest headaches.

And just like that, just an hour before he even began to speak, the Rand topped out in the short term: 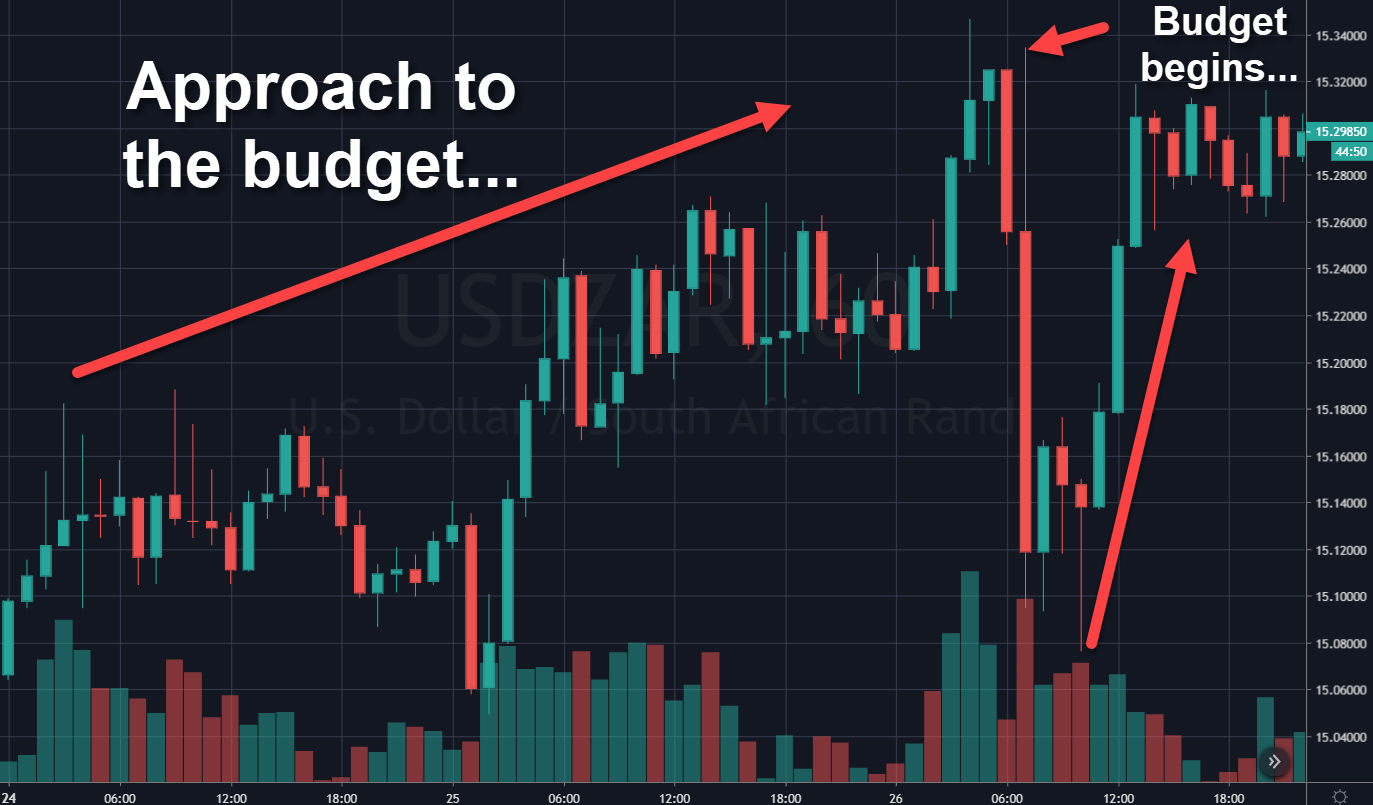 Yet another classic case of "Buy the rumour, sell the fact"...human nature tending to repeat itself over and over again.

As for Tito's speech, it made for quite interesting reading.

Here were some of the key points:

As for some of the key risks which the country is facing:

The exchange control discussions are going to be some of the more interesting ones to watch in this industry...we will keep you posted as best as we can on them.

Another key takeaway from the budget was that the deficit will increase to 6.3% of GDP in 2020 and will peak at 6.8% in 2021 (a 3 decade high), before starting to creep back to more satisfactory levels.

Overall, it was a well measured budget, one which the analysts gave a 7/10 - taking into consideration what Tito had to work with...

...considering his position of being between a rock and a hard place.

But, as always, the proof is in the pudding, especially as to how the wage bill be reduced to that extent?

And if it cannot, where is the shortfall going to come from?

An ominous statement from Tito was that he suggested using private pensions to help cut Eskom's debt, saying that it should not be only the government public servant pensions which are used, but that "it must be all of us" - even though only the government is to blame for Eskom's collapse!

Yet another Communist idea mooted...and one that is not likely to give the markets any comfort.

And the big question: Were these promises enough to stave off junk status by Moody's?

The situation are really on tenterhooks...

Which really seemed the be the whole position of the global economy right now...volatile, unnerved and ready to explode either up or down at any moment.

Which was just what we saw right after the budget:

What a day...indicative of the times we are in at the moment!

One other snippet from Tito was that he suggested using private pensions to help cut Eskom's debt...yet another Communist agenda idea, saying that it should not be only the government public servant pensions which are used, but that "it must be all of us" - even though only the government is to blame for Eskom's collapse!

Just take a look at the SP500 figures: 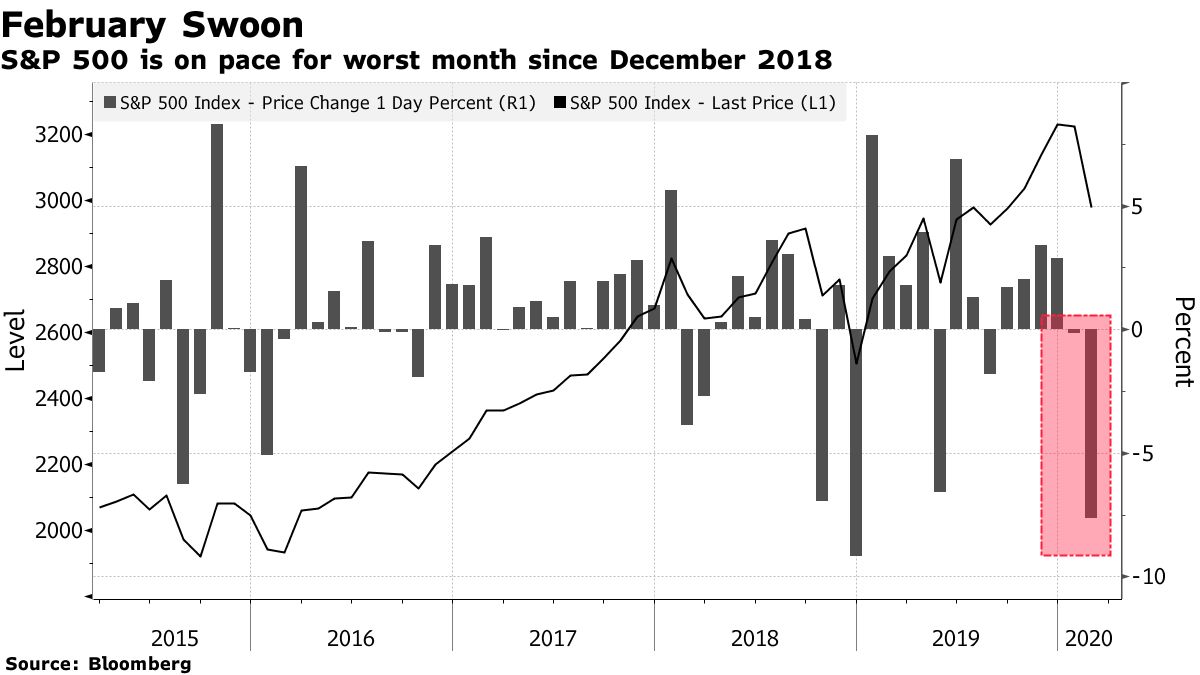 And a range of stocks... 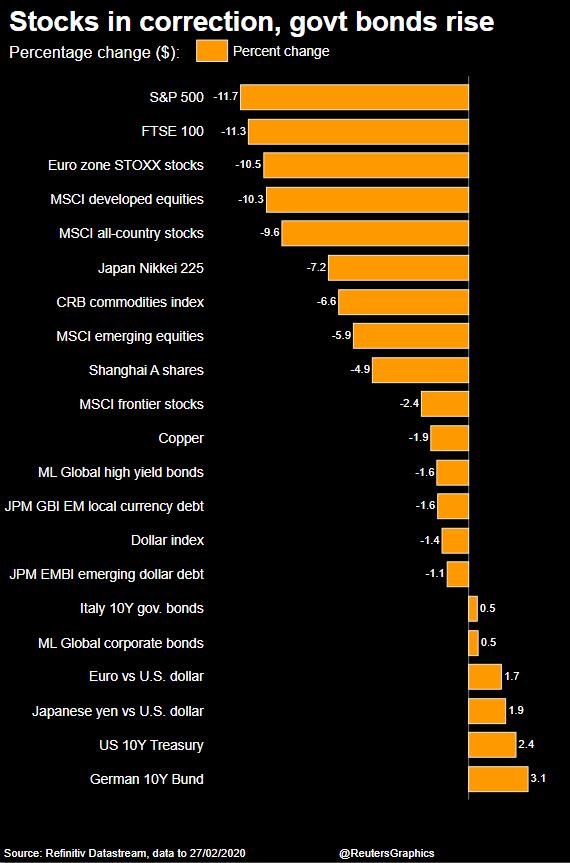 And then the big picture for the Rand...2020 has been one way traffic: 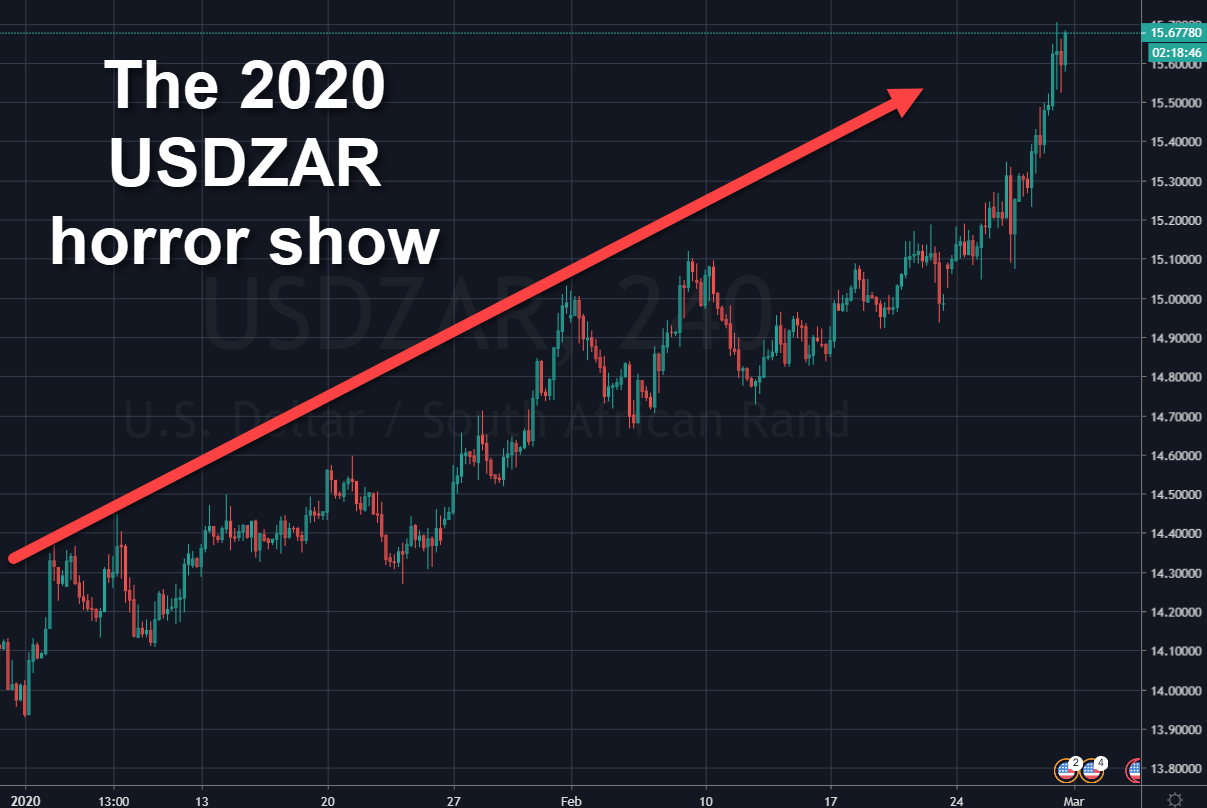 The pictures above show the panic gripping the markets is very real.

What next? What would a virus breakout in the US, the second economic superpower of the world, do to the global economy?

Suddenly the Trade War is out of focus, and has been surpassed by the the economy destroyer: Coronavirus

Don't expect to stop seeing headlines on this. With no clear timeline to a treatment (although much development is taking place), let alone a vaccine, the world is going to be changed as we know it by the time this virus has run its course...

As we turn out attention to the new week, don't expect the intensity to let up at all...!

With most markets on a hiding to nothing, it promises to be another enthralling 5 days.

Everyone will be on edge looking for any further Coronavirus updates, to see whether the global spread slows or accelerates.

Locally, the countdown to Moody's has begun in earnest, as the end of March is the deadline. This last week will not have done much to appease Moody's...so it leaves 4 more weeks for Mboweni, Ramaphosa and co to convince them to give one last chance...

As for events, we see a spread globally, with the main ones being SA's Current Account Q4, and then US Non-Farm Payrolls, Trade Balance and Democratic Primaries Super Tuesday.

Yet again...this promises to be a HUGE week...strap in tight!