Reality always takes a while to sink in.

Many times, this is because of the after-the-fact analysis which takes place to see just where things stand.

And then panic and fear becomes real.

It was so internationally, as fears of a global recession and financial market collapse increased with poor growth figures on the back of the unfolding coronavirus pandemic.

And locally it was no different.

Everyone knew that the result of Eskom's fiascos late last year had hurt the economy. But nobody knew quite how much.

This last week, we got an insight into just how much...

It was another tough week for the ZAR - let's get into the review.

Firstly, our forecast on Friday (the 28th of Feb) painted the picture for the next few days.

Following that target level being hit, we would expect to see a significant retracement from the market back down. See below the forecast:

And then here were some of the top headlines from the 5 days:

On Monday, the markets opened with a bang!

While the market did not take long to track up there, it was exactly as per our forecast from Friday, and we had now hit our target levels...

Monday was a blue one as the Coronavirus continued to make the headlines, and businesses who depended on China suffered. This was shown with the release of Chinese manufacturing PMI data, showing a sharp decline to 40.3 index points in February, from 51.1 points January. This figure shows just how devastating the coronavirus has been on the Chinese economy.

However, by Tuesday, the Rand was back to its crazy self:

And then the BIG one came...

To the surprise of many, the US Fed made a HUGE decision to cut interest rates by 0.5% to stave of a threatening global recession as a result of the coronavirus pandemic.

This was probably their most important decision since 2008 financial crisis days, but it should not have come as a surprise - the market had already told the Fed what was needed, with 3 month Treasury Bill and 10 year bonds yields having already fallen sharply prior to the announcement. 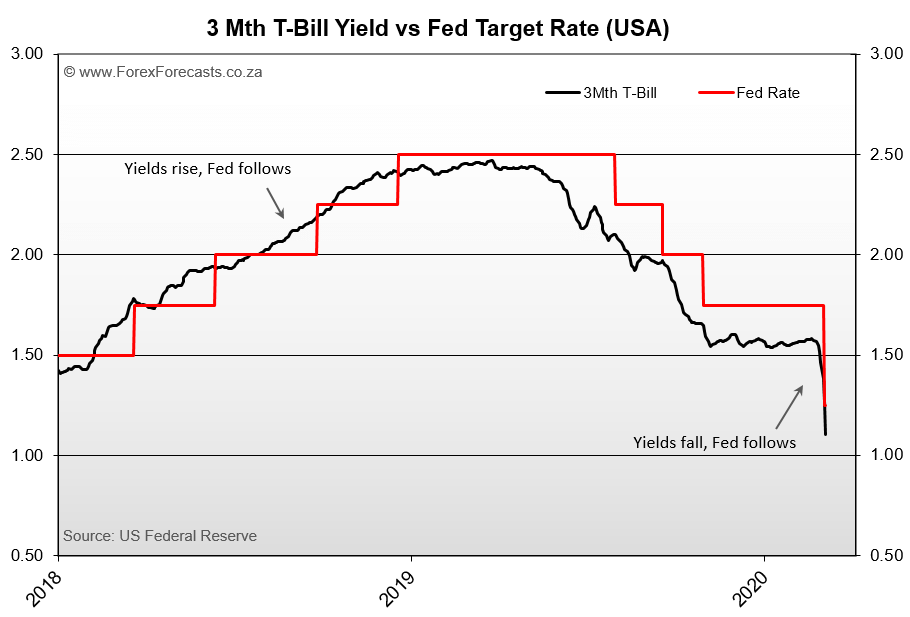 With this news trigger, the Rand roared stronger against the Dollar, at one stage trading 46c stronger in a single hour of trade!

And it was only Tuesday...

(However, this was exactly as per our forecast from Friday - crazy, right?)

The Elliott Wave Principle just has a knack…sometimes we don't even know ourselves how it can be so accurate BEFORE events even happen to trigger the markets lower! 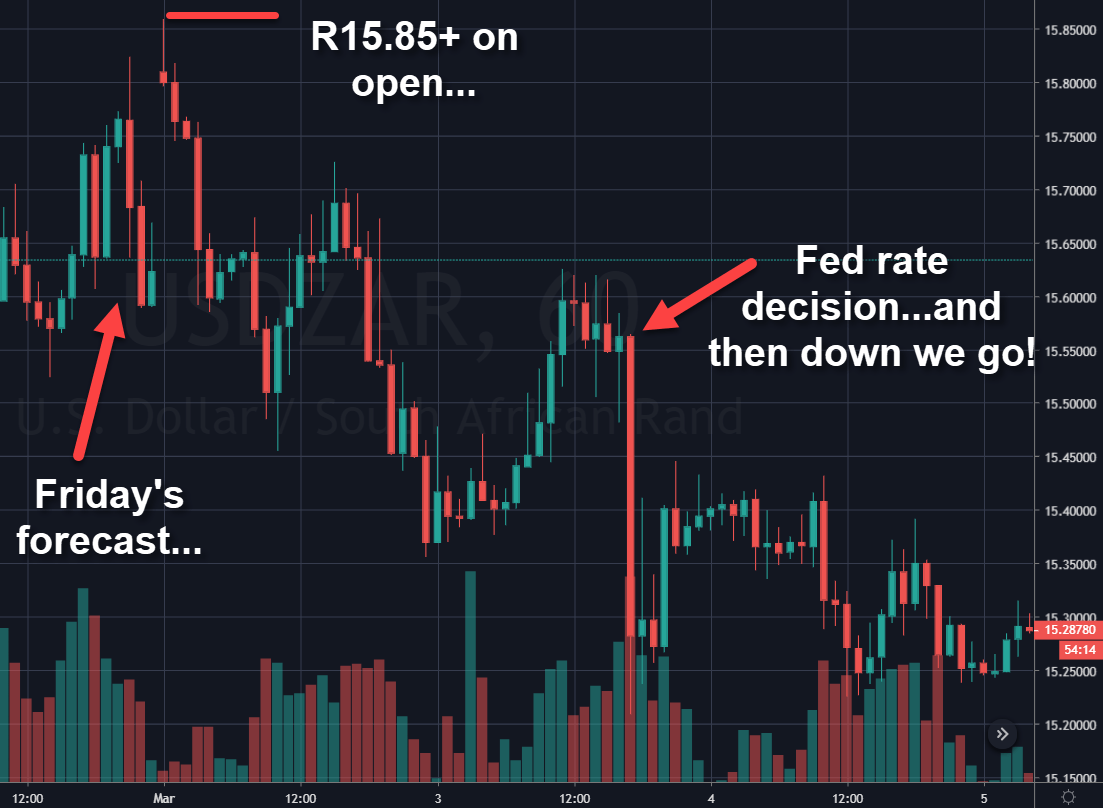 Back to the GDP - serious concerns surround where the economy is going in 2020. The country is officially in a recession again, which is going to require some serious heavy lifting from the government to turn around. Is this possible?

It is the last thing Ramaphosa and Mboweni needed just before Moody's crucial ratings decision...

...the reality of it is that Zimbabwe, the crippled nation from years of Dictator Mugabe's communist tirade, now has the same IMF predicted growth rate as South Africa for 2020. And this is with the US extending sanctions on the country beyond March 2020 just this last week.

BUT it is well on it's way, with the ANC's zealous commitment to its Soviet-inspired (Communist) National Democratic Revolution (NDR)...

... a road that they believe will lead to a socialist nirvana, but instead is the unmentioned elephant in the room (as Anthea Jeffrey highlighted once again this last week) - and will lead to the same devastation seen up north.

Then in other news:

On Wednesday, we released our next forecast for the coming few days.

Even with the market having come off the highs so drastically, with the market then at R15.25, our counts still showed that we would bottom in the 15.32-15.12 area before breaking higher toward R15.62...(see below)

We once again were in for an interesting few days...

And that was just what we got, as the market jumped higher over Thursday and Friday, despite the US Non-Farm Payrolls coming in on Friday at almost 100k higher what they should have been - 273,000 vs 175,000.

And while the Rand has been taking a beating the past few weeks, so has the Dollar , as the Dollar Index, as it fell to its weakest levels in a year - debunking the 'rational' theory that the Rand will weaken when the Dollar strengthens and vice-versa.

Friday provided some choppy trade, but we saw the Rand eventually close in the R15.60s...

Sjoe, well what a start we have had to March already, but I think it is going to be a case of this being the new normal with volatility at highs not seen for a good while.

There will be plenty to keep the markets on their toes, from the unfolding Coronavirus pandemic to global stock markets internationally, with the ECB rate decision thrown in the mix.

And then, of course, there is the countdown to Moody's fateful decision...with Ramaphosa, Mboweni and co having very little time left to convince them to give one last chance...Ramaphosa's comments this week on pensions funds will not have helped...

But yet again...this promises to be a BIG week...so strap in tight!

As for the Rand, we will continue to focus on what the patterns are telling us to give an objective view of direction - last week showed what such a view can do for you in the midst of such a volatility-filled week....