Anyone who thought that Coronavirus wasn't a "big deal" has changed their minds after this last week, as we saw global turmoil follow the spread of the virus.

Thursday was the worst day since the 1987 crash in US Markets, as panic reigned. For those who did not taste the panic of 2008, Thursday's collapse was worse than any day during the 2008 stock market crash.

With US Stock Markets hitting some critical levels, it looks like there is likely to be a lot more action in the coming months.

As for the Rand, it endured another hectic week!

There is no sign of it stopping, so let's get into the full review.

It was a week with more headlines than one can process, but here were some of the biggest general topics covered:

Monday was rightly labelled Black Monday. It ALL happened.

While South Africans slept, the Rand opened 12c higher than its close, only to explode higher to touch R16.95 around 4am...!

Also overnight, Oil had capitulated all of 30% as Saudi Arabia started a price war in the midst of all the global turmoil, and we saw Oil down as low as $31 a barrel! While this will help the petrol price, it may just be a big price to pay for the global fallout and panic triggered by this.

By the time normal SA trade opened, the USDZAR was back at slightly more respectable R16.20/$ level - anyone with a sell trade on without any stop loss would likely have had their account wiped out - NEVER trade without a stop loss!

But that was only the start of the day...

...the real action began when US Trade opened around 15h30 SA time.

The Dow Jones, S&P500 and multiple other markets went into absolute free-fall, with the Dow dropping 500 points in less than a minute of trade opening.

With that, the New York Stock Exchange halted trade for 15 minutes to "allow the market 15 minutes to process the down movement"…

...creating yet even more panic.

The VIX (Volatility Index for SP500) hit 75 and above on Thursday, the worst levels seen since the 2008 Financial Crisis.

The red flags have been there for a MAJOR market correction for many years now...turns out Coronavirus was the trigger.

And so the week continued in this vein - panic, panic and more panic...just take a look at the Dow Jones below - a whole year's gains wiped out in less than 4 weeks! 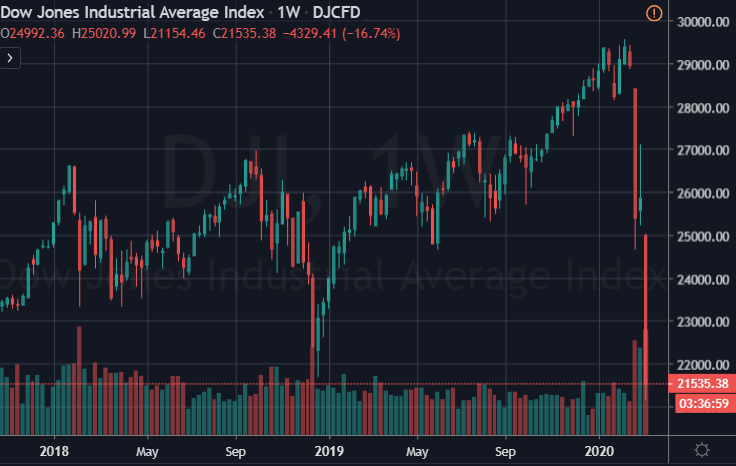 On Wednesday, we finally had the coronavirus declared as a pandemic, which really started the action across the board:

To go with that, Brazil's president Bosonaro's communication director was confirmed as having Coronavirus, who had just met with Trump a few days before...

...and investors just pulled out all the stops, sending the markets into an absolute bloodbath.

Even Crypto Markets, the supposed safe havens, were down around 30% in a 24 hour period!

What a mess...these are some astounding days we are living in, and some of the rarest charts are occurring right before our very eyes! 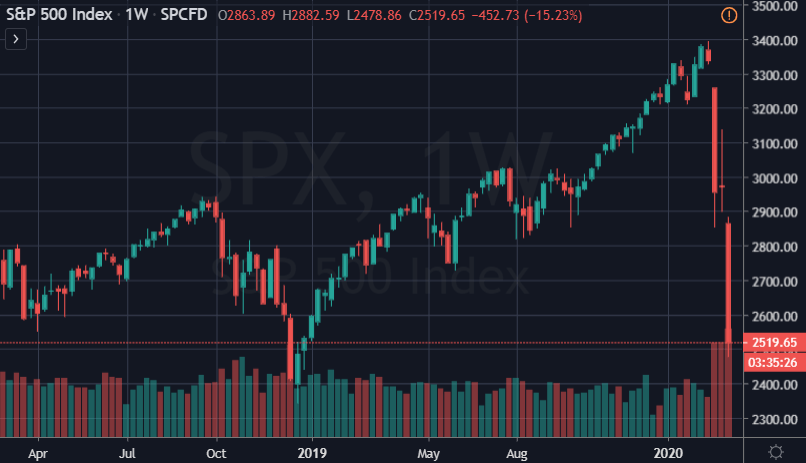 In some of the other news:

And we also saw Gold capitulating from its high of $1703 to hit close to $1500 (as per our forecasts from last month and months before). Over the past few weeks we spiked above our expected target area but never a monthly close and we failed twice to hold these, and we have now seen the sharp reversal, confirming a top is in place. Click here to get access to our latest Gold forecast release from 13 March 2020

And then as for the Rand...whew! 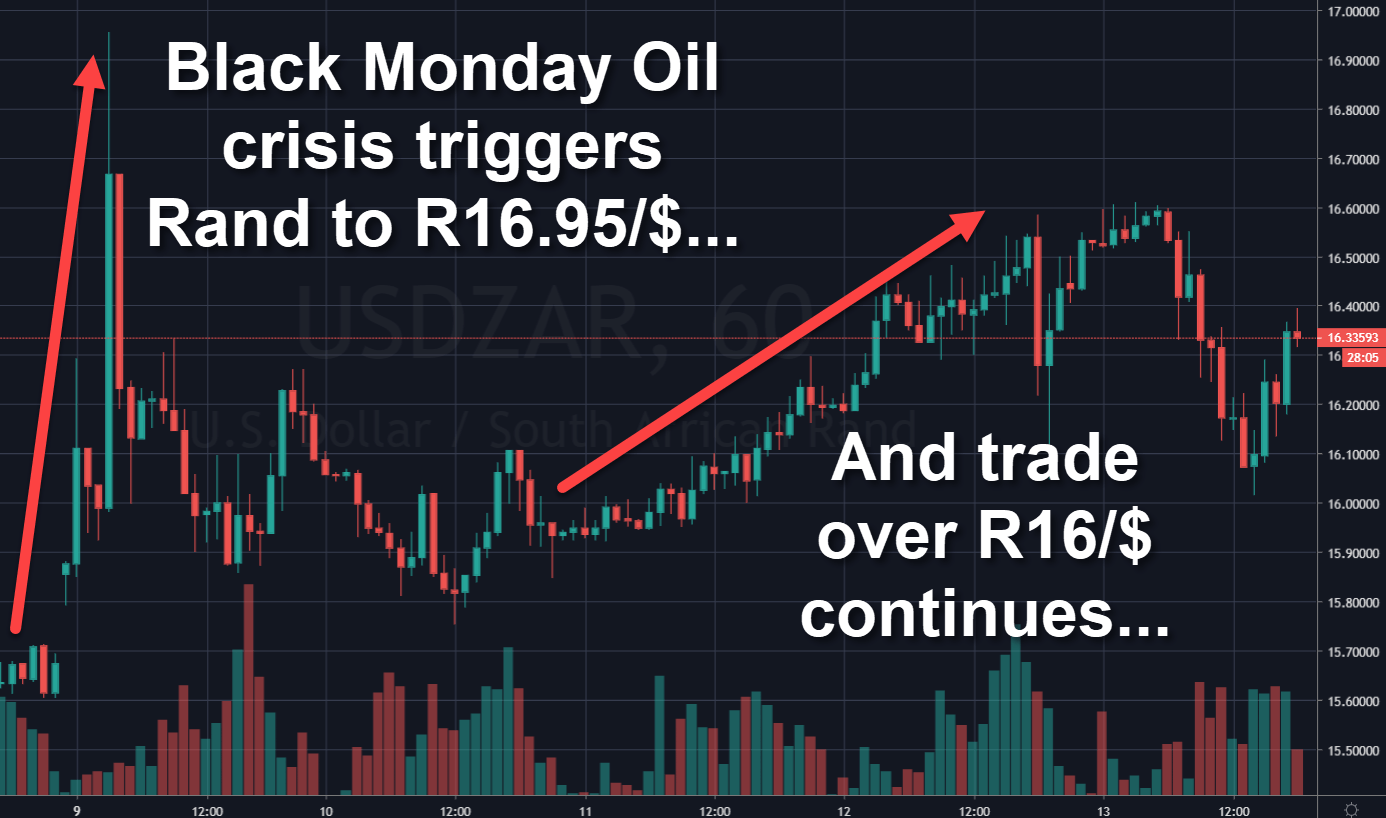 It was a full week of topsy-turvy, upside down, right way round, shake up and down in a washing machine and then spat out the other side!

After Monday, Thursday was particularly bad with a massive 50c turn in just a couple of hours down to R16.05, followed the market flipping back to over R16.50 before the day was done!

And this was all after South African trading hours!

What the market is proving over and over again is this:

It is not moved by events, but by irrational, emotional and reactive behaviour, which is triggered by events. And getting caught in that emotion is lethal.

If doing business though the Trade War was bad, this is a whole new kettle of fish...

...that was the wrap for the week, as markets awaited news from the US on stimulus packages and other plans to try and stave off the 'Coronavirus effect'...!

This next week has promises of being another humdinger...

All the pieces are lining up. We have a slew of events:

...plus a few more smaller ones.

So, with no sign of slowing, we are into the new week.

Late on Friday, Trump declared a national emergency which clears some of the red tape and clutter out of the way of persons taking action.

And as for what we can expect from this next week...?

...phew, well, at least the following:

Remember that every market cycle goes from greed to fear.

...and then to despair

And then the market turns. And we are not there yet, in terms of global stocks etc.

So...yet again...this promises to be a BIG week...strap in tight!

As for the Rand, we will continue to focus on what the patterns are telling us to give an objective view of direction - last week showed what such a view can do for you in the midst of such a volatility-filled week....