There is never a quiet news week when it gets near the end of the year, and this last week was no exception!

As US elections and stimulus took center stage, the 'wires' hummed with ever changing updates coming across the pond.

The election and surrounding debates are beginning to really hot up, and the global economy is watching very closely to see what happens.

The Rand however, stayed fairly calm on the whole...

...although losing some of it's gained ground from the week before.

There is a whole lot to dig into - so let's get into the full review.

To begin with, here were the biggest talking points from the 5 days:

It was a week of global focus, that was for sure, and right from the get-go, it was all about Trump's health.

The president having been hospitalised last week had briefly upended all plans of the election, but now on Monday, Trump was looking to reset things back to normal.

And in true larger-than-life fashion, Trump emerged from hospital on Monday just a few days after being diagnosed, and was back in action in the White House on Tuesday morning...

...and to the action he certainly returned, putting a lid on the negotiations around stimulus, saying that the Democrats were "not negotiating in good faith", and that stimulus plans must be put off until after the election.

This sent the markets, particularly stock markets, into rather a tailspin!

But this quickly changed a few hours later as the President's intentions came a little clearer:

He announced he would sign the following standalone bills, if Congress could just get them to his desk:

This showed things a little clearer, that the President was trying to avoid bailing out Democrat cities and states, and not allowing crazy ideas such as no one being allowed to evict anyone from rental properties for 12 months, whether they pay or not - which was what Pelosi and others were pushing for.

But the uncertainty remains aplenty, as America and the world looks to see what the next step will be, with just 3 weeks to election day...

As for the Rand, we saw it weaker, touching R16.73 to the Dollar, as the USD pulled back some strength following Trump's recovery.

Just like that, all of a sudden it was Friday...

...and what a Friday it was for the Rand, as it recovered some ground to break below R16.50/$ again: 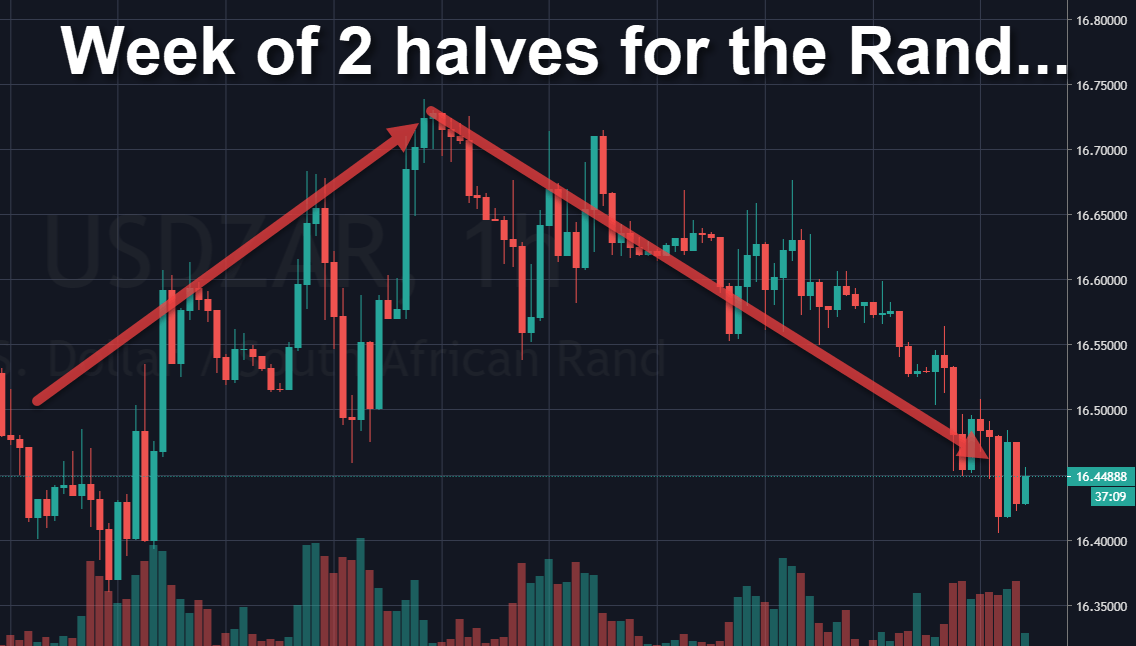 This was as the Dollar endured a torrid time amid the US uncertainty. The USD was back over $1.18 to the Euro, and the Dollar index testing 93.

So at the South African close, we saw the local unit testing R16.40, before reversing to end the week off around R16.47...

And then late on Friday, reports came out that President Trump had raised the Republicans stimulus offering to $1.8 trillion...

And that was the end to an eventful week...

As we look to the week ahead, we have very few fundamental events as triggers, the main ones being:

But don't let that fool you into thinking that there is nothing happening to trigger market activity...

We are in for another rollercoaster week, as US politics takes centerstage, along with stimulus talks, Trump's health, whether the next debate will go ahead...

...and not to mention the rumours of the Democrats attempting to remove Trump from office based on him being "in an altered state" from his treatment.

So much uncertainty prevails - which means more volatility!

Well, we will keep looking at our Elliott Wave based forecasting system to give us some clues, with some initial Rand weakness likely - but there are some key levels that we will be watching to confirm the larger degree trends.