The tightrope for global markets to walk is very real right now, as they try to balance between the different economic, political and social news and updates.

For the Rand, this somehow seemed to be no bother...

...a quiet week passed us by in terms of market activity, with volatility way down.

As the Rand closed out the week almost where it began, it is necessary to go over the previous 5 days to see what all has happened.

One thing is for sure, this next week is going to be all the more frenetic - best fasten your seatbelts now...

But first, join us for the Rand Review!

It was quite a week of news, and here were the biggest headlines:

So as another massive week began, all the focus was on Ramaphosa's proposed plan of action to see how SA was going to recover the economy from the pandemic's battering.

With the Rand opening a shade under R16.50, it was bound to be an interesting week, with markets looking for some direction...

The economic recovery plan was key to this. With the damage from the last few months very evident, with millions of jobs lost, a clear plan to get back to some form of normality was crucial.

However, when this finally rolled around on Thursday, it looked anything but clear.

The DA and FF Plus particularly bemoaned the plan as being void of any real points of action - just more talk, more committees, and no implementation.

One of the few big announcements which had immediate effect was the extension of the R350 social grant - but taking on more debt burden does not get an economy going, as much as the grant is needed for many...

So where this leaves SA for the coming months is not altogether positive - the next point of call is clearly Mboweni's speech, as he is a little more hard-hitting as to the truth (whenever that happens, as there has been a request for a postponement to the 28th).

However, if there is real change, it has to come from the top of the chain - Ramaphosa is responsible...

One would have thought that this speech would have hurt the Rand - and for once the market reacted rationally, as hurt it it did... 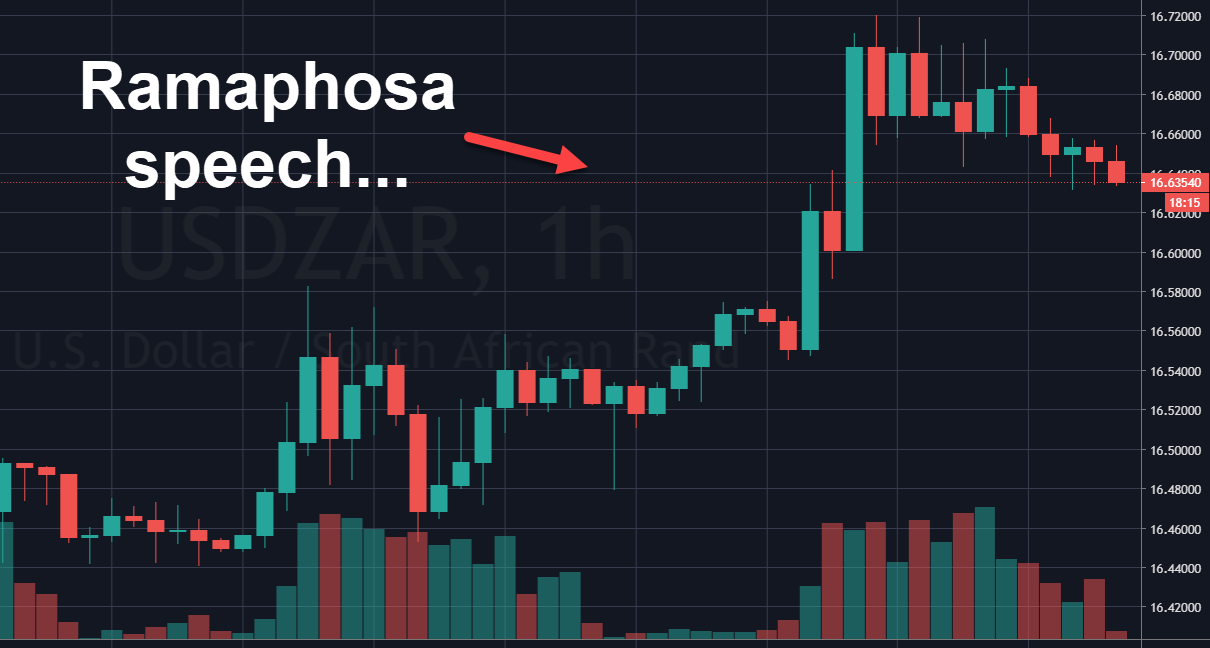 And as for the Rand...well, it continued to ride through the midst of local and global minefields, managing to move sideways for most of the week.

After Thursday's weakness on the day of the economic recovery plan being revealed, the market recovered in to Friday, breaking from over R16.70 to test R16.50 again.

So we were basically back to where we began, as the Rand closed out South African day at R16.52/$, not far from where it opened!

Where to next is the question, as we head into a frantic end of year...

As we look to the week ahead, we have few fundamental events as triggers if Mboweni's budget is postponed, with the main ones being:

But expect another week of action, with US politics likely to again take centre stage. As we head into the final couple of weeks before the elections, all eyes will be on the next presidential debate and stimulus talks, with the Biden families dealings with Ukraine and China, and Facebook and Twitter's censoring being pulled into the spotlight.

As for the Rand, we will keep looking at our Elliott Wave based forecasting system to give us some clues, with some key levels that we will be watching to confirm the larger degree trends.