Another week, another fascinating few days of trade and all of a sudden we are into the last quarter of the year.

And this is often one of the more volatile times of the year in the markets, as the holiday season has it's effect on the markets heading into December shutdown.

The Rand remains on uncertain ground with fickle trade over the last few weeks.

We have seen the market rebound all of 70c from it's September recovery, and now one wonders what is next.

Let's get into the full review, as we have a lot to catch up on with this being our first Rand Review in 2 weeks.

Here were the biggest talking points from the 5 days:

So to start with the Rand's movement, we saw the local unit open at the R14.85 level, having finally made a mini-comeback after heavy September losses.

But now it was a question whether the momentum could be kept up - as the Rand has been playing catch with that R15/$ for the past few weeks, and no clear breakout has arrived just yet.

All eyes were on the US as the week began, as the "debt-ceiling" got a lot of attention. It has become another major party-lines debate, as the national default loomed. Eventually on Wednesday, Republican Mitch McConnell crumbled under pressure from Biden and said that they would allow a vote to go through for a fixed dollar amount.

While it seems there is no other option, this is no solution whatever with the US debt situation spiraling out of control. There is only one way that it is going to end - BADLY...and it is only now a matter of time. It is a house built on the sand, an economy built in a flood plain.

Of course, this remains a blame game between the two parties, with McConnell stating the following:

“To protect the American people from a near-term Democrat-created crisis, we will also allow Democrats to use normal procedures to pass an emergency debt limit extension at a fixed dollar amount to cover current spending levels into December,”

Regardless of who created the situation, it is a good time for every investor to take stock of their position - and their Dollar & US exposure, to make sure they are spread to manage risk. This debt crisis is going to blow up, and at this rate, very much sooner rather than later.

To get back to the Rand though, which was being affected by events like these, we saw the market push back weaker again.

And then the tide turned.

Some relief, as Wednesday's close saw us back sub R15/$ again.

It had already been a wild ride, and it was only Wednesday! 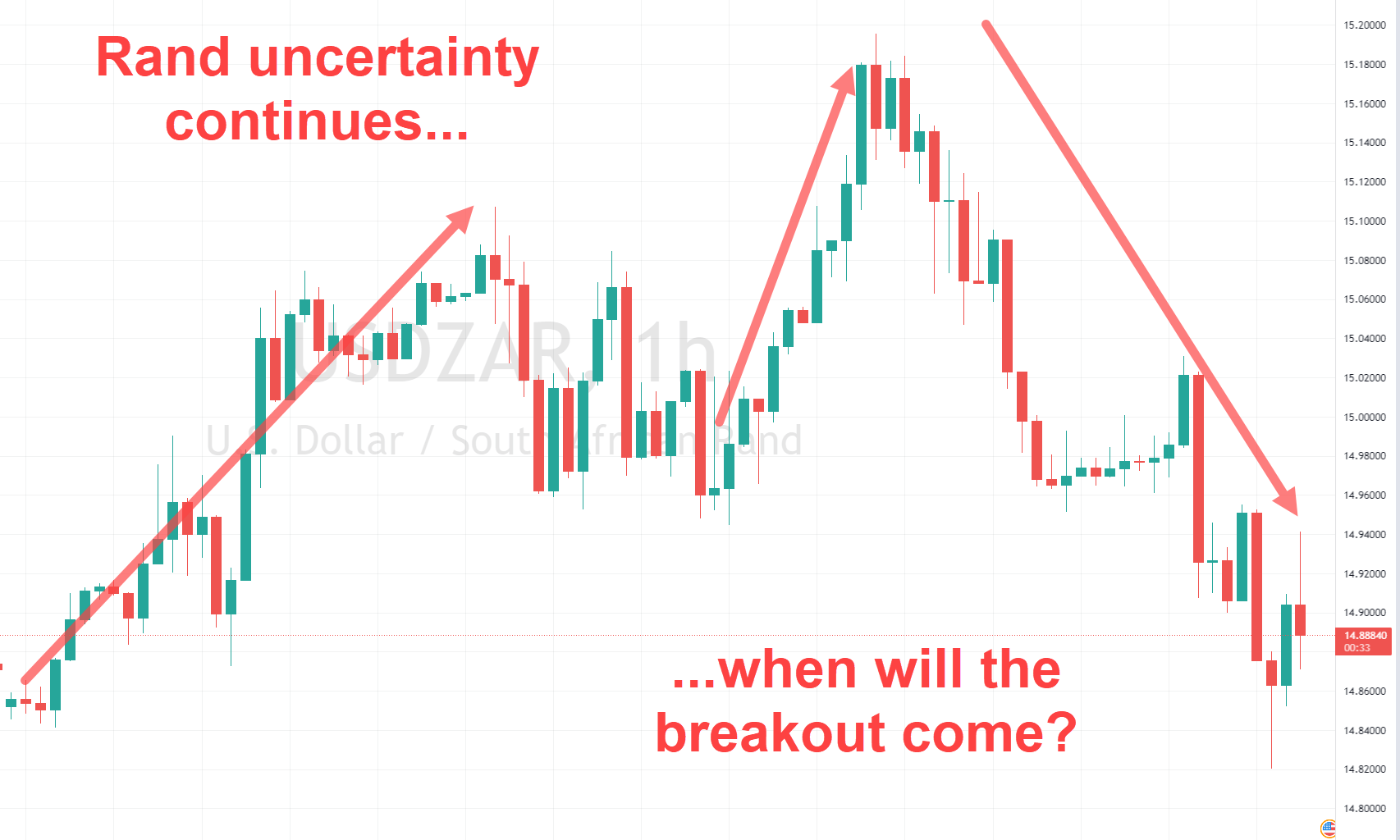 And before we knew it, it was Friday, and with it was the US Non-farm Payrolls announcement, which showed that a paltry 194,000 jobs were added last month, way below consensus expectations of 460,000, showing that the labour market recovery remains shaky. But it was mixed with some good news, as the unemployment rate dropped from 5.2% to 4.8%.

The Rand reacted positively to this news, pushing down to hit a low of 14.78 (just as forecast in Wednesday's update to our subscribers), but then reversed fortunes to end the week back above 14.90.

And so as we head further into the week, we have some fundamental data that could provide some triggers:

And then of course, there are growing concerns at an overbought stock market, inflation fears due to surging commodity prices and global supply chains disruptions (that are likely to impact the global economy sooner rather than later) - and the damaging effects (and agenda) of the increasingly authoritarian lockdowns and mandates globally.

All of these provide a background for a jittery market and continued volatility for global markets in general and the Rand in particular.

But once again we will focus on what the market patterns themselves are telling us, based on our Elliott-wave based forecasting system, which have continued to give us and our clients an objective view that enables them to make informed and educated decisions.

To get a look at the latest forecasts, use the link below:


Click here now to start your free trial
(You don't want to regret not having done so this time next week...)

Alex Paynter
« Previous Post Rand back below R15/$...just as per Elliott Wave! Next Post » Rand Trainwreck With Eskom, Elections...where next?