What a week, and what a turn of fortunes for the Rand - as it all too quickly went from bad to worse following the collapse of Eskom's energy supply.

As the local government elections approached, it was not looking good for the ANC, as the Rand shot back over R15/$, and we saw Eskom suddenly push load-shedding to level 4.

We are now into the final leg of 2021, and all eyes are on what defining moments are yet to come that are going to define this year...

...and most of all, what is the Rand going to be worth by the time 31 December arrives?

Let's start with a full review, before we get into some views for the weeks ahead!

The biggest talking points for the week were as follows:

So to start with the Rand, we saw it opening up around R14.85 to the Dollar, having already lost some ground into the end of the previous week.

And the Rand actually started off the week in top form, with a happy Monday seeing the local unit push toward R14.60, eventually reaching the level by the following day...

...but that was as good as it got, as the tables turned following the Eskom disaster reigniting.

But before this week had even begun, we must start with our forecast from Friday, which came before any of this…

...issued on 22 October, our prediction showed the Rand sitting at R14.82, with the expected trend for the USDZAR to push all the way into the R15.11-15.40 area. This was our Short Term Forecast, expected to take place over the course of the following days. (see below - click to enlarge)

So this was issued out to our subscribers previous week Friday, giving them the outlook for the days ahead.

If you are interested in getting these updates twice a weekon time to help your business, corporate or personal decisions for anything forex related...
...please take a look at our 14 Free Trial over here

To get back to the Rand, our subscribers did not have to wait very long to see this move start to play out following the Eskom news...

...by Wednesday close, we were back over R15 to the Dollar

...by Thursday close, we had broken into the target area

The week had crumbled into a mess, and Eskom had been the trigger. Tuesday brought news of stage 2 load shedding, which quickly became stage 4, before some respite by the end of the week, with load-shedding due to end on Friday.

These had been caused by "pure negligence" according to reports from Eskom - another example of the unbelievable inability from the power provider to keep the lights on.

And this is largely the fault of the ANC and it's own cronies, while Ramaphosa promises that "If you don't vote ANC, electricity may never be restored" - when he himself and the party is the reason these very issues exist!

To get back to the Rand, we saw the local unit pull back a little ground to close the week off: 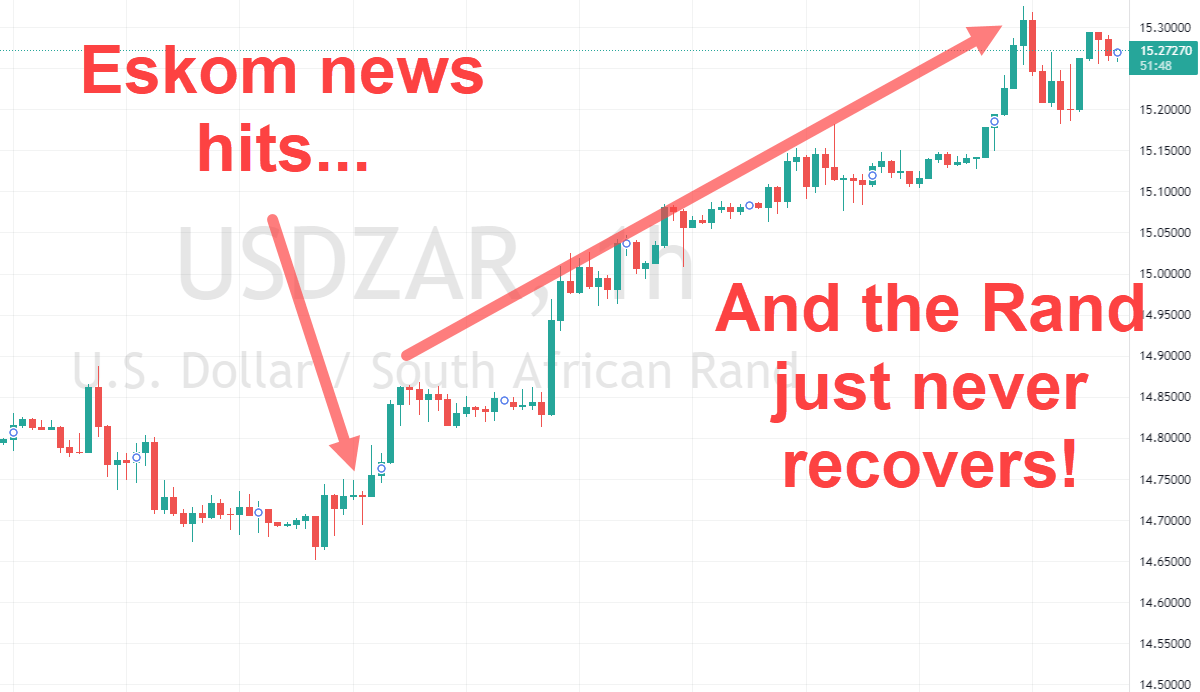 But on the whole, this week had been nothing short of a trainsmash, as the ZAR ended around R15.25 to the Dollar...!

Our Elliott Wave based forecasting system had called it again!

And that was the wrap…

Below is a short rundown of what we are watching this week - but bear in mind that what we will really be watching is the Elliott Wave based forecasting system which called all of the moves over the course of last week.

Regardless, triggers do move the market, so here is what we are watching, with the US lining up some massive ones as well as what is happening locally:

So plenty to keep the markets on their jittery toes, as it promises to be another humdinger of a week!

To get a look at the latest forecasts, use the link below:


Click here now to start your free trial
(You don't want to regret not having done so this time next week...)

Alex Paynter
« Previous Post Another uncertain week for the Rand... Next Post » US Inflation Sends Rand Packing...where next?