Once again, the Rand has turned the tables on the Dollar, as we saw a massive push back below R15...

The ZAR never ceases to amaze, as in amongst the local turmoil, it produces a run on the USD.

But it was not just the Rand, as we saw most of the field outperforming the drooping Dollar again.

Negative sentiment is certainly around an extreme on the world's reserve currency, and this is a sure sign that we are due for a turn soon...

...but for now, the Rand is the beneficiary!

Before we get into the week's activities, here were some of biggest headlines from the 5 days:

Trump Impeachment Senate Hearing - and then of course we had the start of Donald Trump's impeachment hearing before the Senate, which was expected to be dead in the water before it even started.
For the local unit, we opened at R14.92, a massive gap from where we had closed on Friday at R14.81...

...but nature hates a vacuum and more often than not the market is drawn back to fill this price gap. 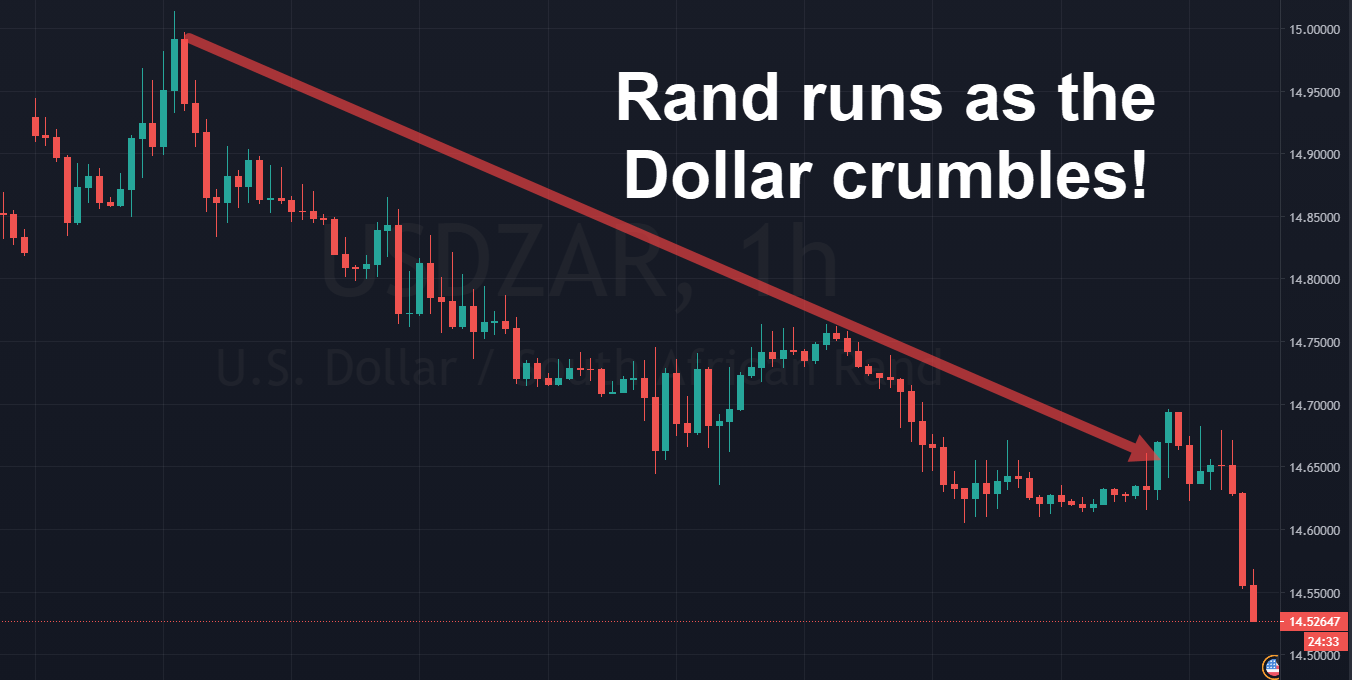 Which is just what we saw, as the market returned speedily back to the R14.80 levels, before weakening again.

Many things could have triggered this, but one of the big pieces of news was that the the 1 million AstraZeneca rollout that was scheduled to start mid-February has been halted due to disappointing test results against the newly found variant.

Minister of Health Dr Zweli Mkhize announced on Sunday that additional tests will be performed in order to ensure that it will be used where it is the most effective. It is now, once again, a waiting game for the J&J and Pfizer shipments to arrive in the coming weeks.

And reportedly, the J&J rollout should cover the RSA variant, which was a serious concern.

But all these vaccines remain experimental ones, and serious questions remain as to their actual effectiveness and requirement in order to get economies fully up and running?

And of course, along with that, is pushing endless amounts of stimulus into the economy (which is going to have to be paid for at some point) really what is needed?

President Ramaphosa's SONA address was one filled with enthusiasm as always, but he had a tough mountain to climb. Here is his speech at a glance:

These are great promises, but this will always be a case of whether they can be implemented or not… He has a real challenge with annual business confidence in 2020 being worse than during apartheid economic sanctions.

To get back to the Rand, despite all reason for worry, we saw the local unit break to R14.50s again on Friday afternoon, nearing that much anticipated R14.50 level again.

Will the Dollar make a recovery…or will we see the Rand break lower?

Join us for the week ahead to see!

As we look to the week ahead, apart from all of the other points we have discussed, there were a number of economic events:

So a few potential triggers here that could provide some spark for some moves.

Of interest, across in the US, as the Senate impeachment trial completes, several cases related to significant US election fraud are slated to be heard in the US Supreme Court in the next week or two, which could prove fascinating (as big tech & media continue to dismiss the mounting evidence as 'baseless claims').

As for the Rand, it has certainly shown some teeth the past week or two, but this next week is pivotal and we are watching several price points to confirm our wave patterns (based on our Elliott Wave based forecasting system) and give us some direction for the days, weeks and months ahead.