What a week for the Rand, as the Rand turned an early setback around to end the week with all guns blazing, rushing down to sub R15/$ for the first time in October...

...and disappointment for exporters - apart from those who took cover in time!

It was a massive news week, as well as wild in the markets...

...and surprise surprise, our Elliott Wave analysis saw it all coming!

Let's have a look at how you could have seen it too!

Before the week began, we issued our Elliott Wave Forecast for the USDZAR on Friday the 4th of October.

The outlook was a bit of a complex one, with the ZAR trading at R15.04, expected to bottom out in the target area of 15.05-14.84 before moving higher towards R15.20 (potentially higher), before falling sharply to new lows (see below - click to enlarge)

And what followed was a very interesting week in the markets...

And too in the news, with some of these big headlines:

From the open of markets on Monday, the Rand was on the back foot, quickly moving as per our forecast from Friday. The low had been right in our target area, but now the ZAR was on the upward trail, as we headed into a week of uncertainty.

The biggest uncertainty had to be the Trade War, as the pendulum swayed from side to side...who was going to crack first?

China started the week with putting a dampener on things by stating that they will not be looking for a broad trade deal and will be keeping certain issues off the table...

As this went on, the Rand slowly edged its way up to R15.31 amidst the uncertainty...this was a little higher than our ideal target area from Friday, but still as per our overall predictions...

Then it was time for our next forecast on Wednesday.

It appeared we were in for an interesting second half of the week.

And interesting it certainly was!

On Thursday came news of a potential "mini-deal" between the US and China on currency, which was at least one step in the right direction.

And then the big news for the week came on Friday: Trump saying that "good things are happening" in the China trade talks, and "Warmer feelings than in recent past".

The Dow surged 450 points on this news - and the Trade War had a positive close to the week! 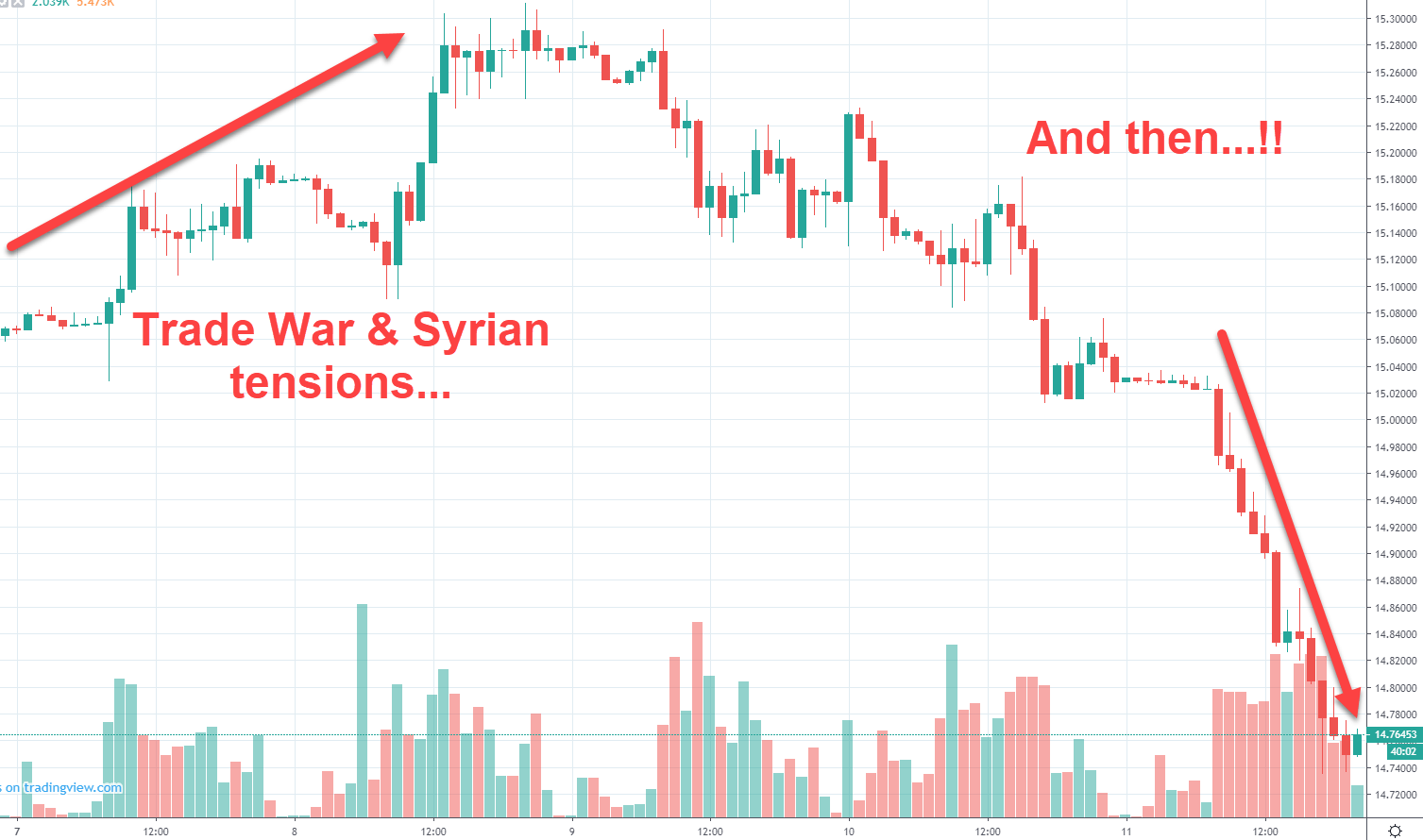 It was more a case of Dollar weakness than Rand strength, as we saw the Dollar Index take a sharp tumble...despite this being Dollar-positive news!

So, contrary to logic (the news should have been Dollar-positive), but exactly in line with Elliott Wave analysis...

...it isn't always perfect, but the science still amazes me every time!

And then, in other global and local news...

And that was the wrap for the week...

The Rand had jumped hurdles, through hoops and climbed overhangs to end the week strongly on the front foot...

...what a few days it was the ZAR and the Elliott Wave Principle!

This week sees not a lot in terms of economic data releases, but there is still plenty to keep the market on the edge of their seats, what with Turkey & Syria, Trade War updates, Brexit looming, Mid Term Budget and Moodys.

After a tremendous week for the Rand, the question is - can the Rand extend its gains of the past 2 weeks?

Again, based on our latest analysis, the answer is a likely yes, but again, do not expect it to be one-way traffic.

We have some key levels this next week to watch, which could make this week a watershed one.