Despite the rest day on Tuesday, the Rand could not catch a break this last week, as global tension rose once again...

Heritage Day or Braai day on Tuesday provided some calm, but the news from the US spoilt it...

And that set the tone for the week with the Rand trading back up over R15/$.

A very quiet week of events means it isn't a big Rand Review today, but there is still more than enough to sink our teeth into. Let's get into it!

Here were some of the biggest headlines from the week:

The Rand opened at R14.90 to the Dollar, expectant over further Trade War news, or anything on the Iran situation...

...but it turned out to be a different story which dominated the week:

The Democrats came out all guns blazing, claiming that a 'whistleblower' had provided information that President Trump tried to get Ukraine to interfere in the 2020 elections.

As it turned out, the White House did release notes of this call, wherein Trump is said to have asked the Ukrainian President to investigate the business dealings of Joe Biden (one of the candidates for President next year), but it was not a quid pro quo (used as leverage in exchange for foreign aid), as was claimed.

How far this impeachment inquiry will really go is anyone's guess - but with a large Republican majority in the Senate, it is unlikely that there will be much substantial which comes out of it.

It seems, once again, that the desperate Democrats are doing all they can to oust Trump - and protect front-runner Biden.

The fact is that these kinds of conversations happen between Presidents all the time!

And if there are allegations of shady dealings with Ukraine by an ex-Vice President and his son, surely he has the right to ask that this be investigated.

But we will see - whatever the case, markets did not like this news.

Despite all the volatility and trade wars etc, Trump being impeached would have massive global ripple effects, and emerging markets had a difficult week in concern over this.

The Rand lost ground Wednesday to break back over R15/$ and pretty much held there until the end of the week. 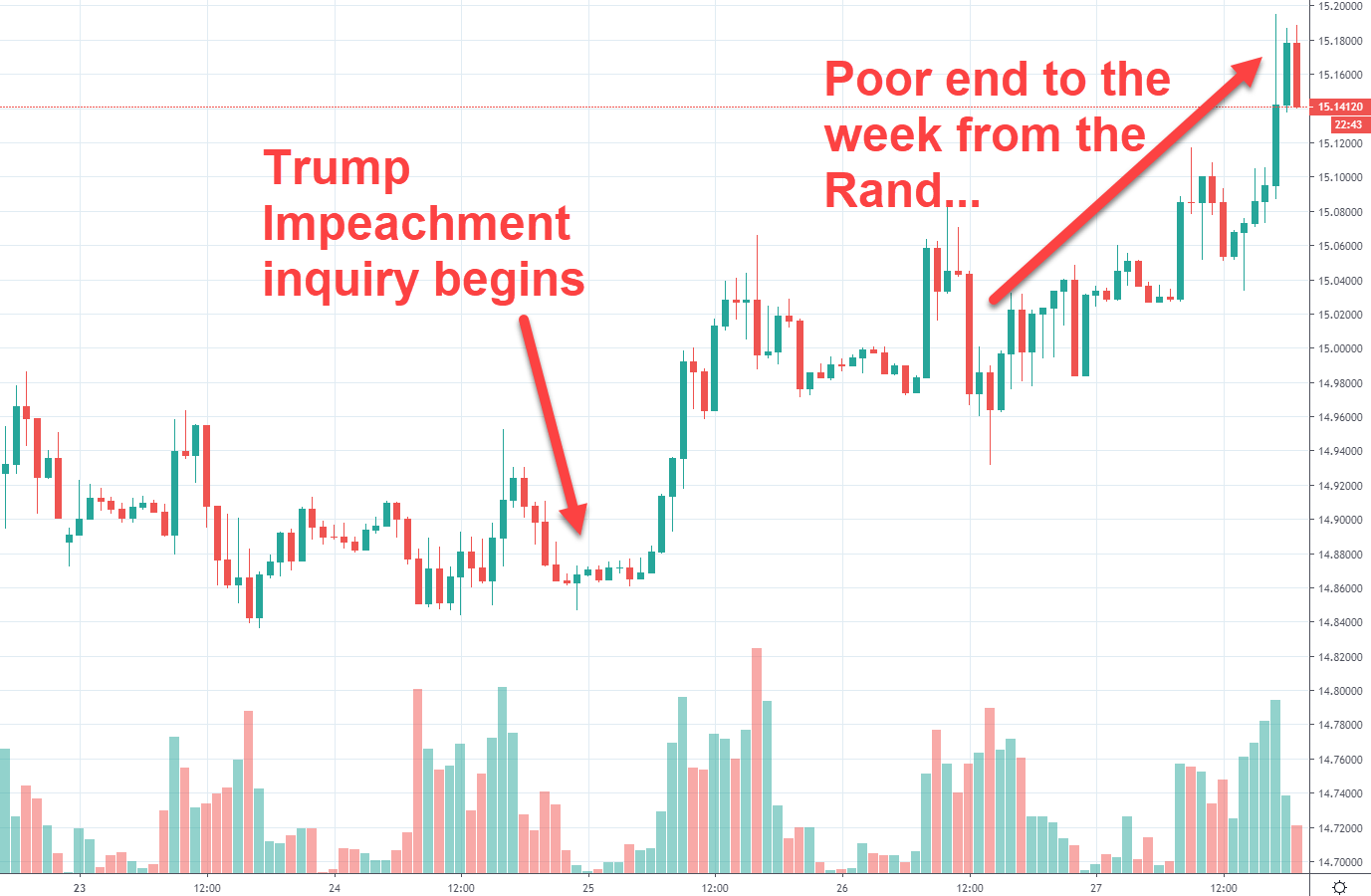 Over in the UK, the Supreme Court ruled that Boris Johnson's decision to suspend Parliament was unlawful.

So now Parliament is effectively back in session as it should have been, had Johnson not suspended. However, the clock is ticking toward the October deadline, with no clear end in sight apart from a hard Brexit...!

While Boris continues to put on a show, the EU is fast losing patience, sighting his recent proposals as lacking in detail and seriousness despite the 31 October date fast approaching.

The Pound is continuing to suffer, as its downtrend vs the Dollar and Euro continues.

And that was that on the news side...

A rather glum finish to a difficult week for the Rand!

With September come and gone, we are into a new month tomorrow, and with that comes a lot of economic data releases, both local and international, with the three main ones to watch being SA Balance of Trade, US Trade Balance and the biggie - US Non-Farm Payrolls.

The Rand has had a bad run last week, but can it turn it around?

Or are we headed higher in the weeks ahead?

Our analysis is showing two possible scenarios, based on the application of the Elliott Wave Principle (together with our unique combination of price ratio, momentum and time cycle studies).

This makes the next week or so a very important one, and we will be watching certain key levels as well as how the wave patterns evolve to give us a hint.