...with a heap of events, some planned and some not, there was more than enough action to keep everyone interested.

The economic events came thick and fast, and then it was international relations in the spotlight again as the oil price rocketed.

(Not to mention our own personal event: the launch of our Global Market Forecasts for the Euro vs US Dollar, US Dollar Index, Gold vs US Dollar and Bitcoin vs US Dollar. Learn some more here)

Let's get into the meat of this review, as we have a lot ground to cover!

Firstly, our forecast on Friday the 13th of September gave an outline of what to expect over the coming days.

With the Rand having strengthened down to R14.57, there was potential for a little more downside but most likely the market had bottomed out in our target area (14.66-14.40) and was now going to move back up again during the week toward R14.87-15.07...

...if this played out, it was certainly going to be an interesting few days (and our subscribers were ready and waiting for it)

Here were some of the biggest events from the 5 days:

To start things off, the market 'gapped' over the weekend and the Rand started 7c weaker to the Dollar at 14.62...

The first news of the week was the Saudi Arabia oil crisis which had developed over the weekend, with Iran suspected and accused of having sent drones in to strike the Saudi oil fields. The missiles fired from these drones caused significant damage and fires raged as a result of the attacks. Oil prices skyrocketed 20% on Monday morning, as the world tried to digest 5% of its global production being affected in one attack.

(Of interest, Elliott Wave analysis showed the market was primed for a substantial spike up days prior - all it needed was a trigger....and what a trigger it got!)

This did not do any good for US & Iran relations, as the Trump administration came out and called it an "Act of War"...

...and an Iranian official warned of "all-out war" should the US or Saudi Arabia attack.

This left markets on tenterhooks, and US Stocks went for a tumble on the uncertainty of it all.

Thankfully, as the week went on, Oil prices stabilized once again down into the mid $60s with Saudi Arabia returning to normal oil production, after the market had touched $70 to the barrel...funny how Elliott Wave can almost foretell the news...

However, risk-off sentiment as investors like to call it, was back in town, and the Rand continued to lose ground as the week went on: 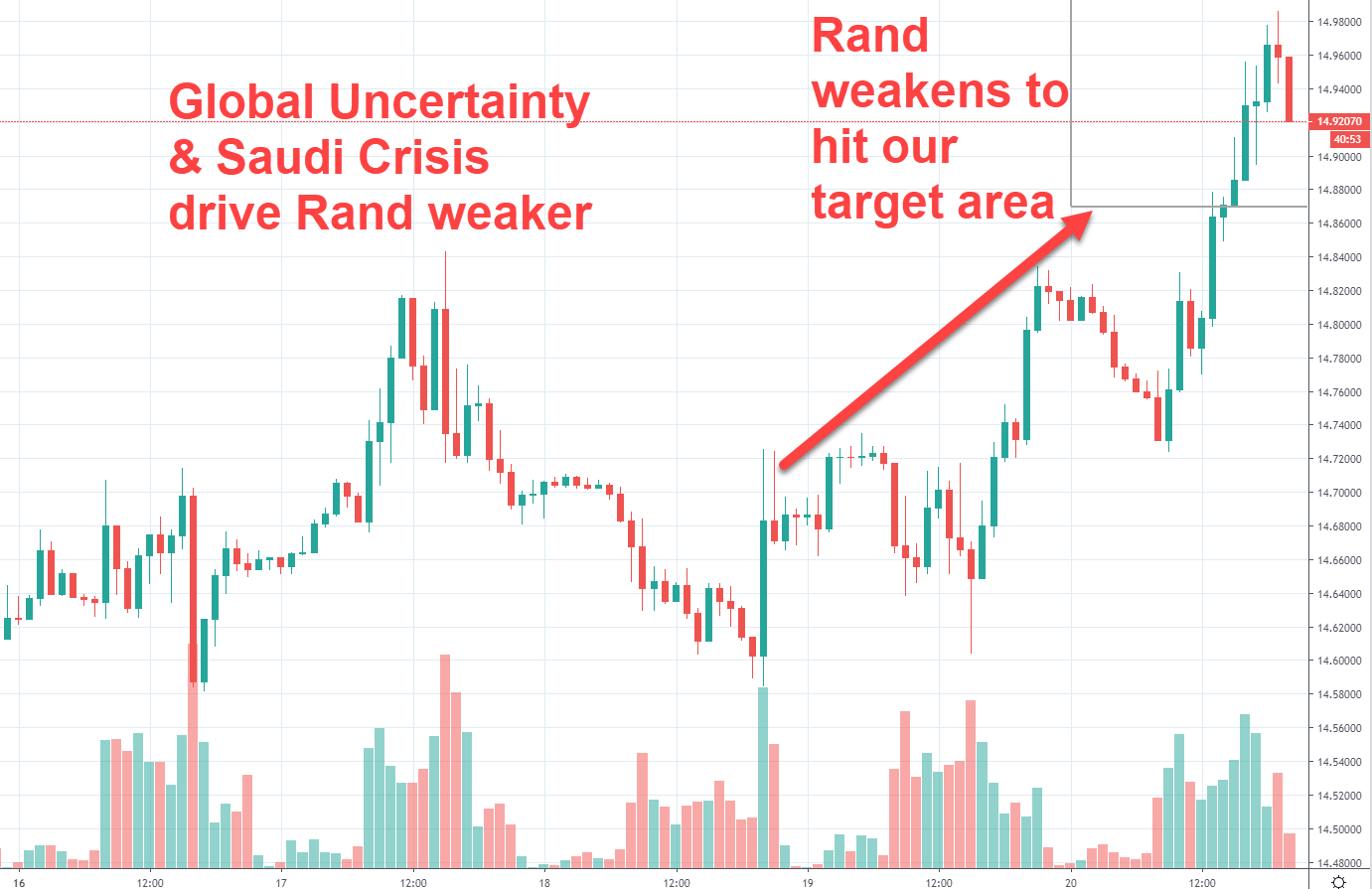 In fact, by Friday evening, the market had lost all of 40c from the previous week's close, touching R14.98 to the Dollar...

...which perfectly validated our forecast from from Friday the 13th's forecast, with the market firstly bottoming out slap-bang in the R14.66-14.40 area, and then moving up to make a high slap-ban in the middle of the R14.87-15.07 target area.

Another win for Elliott Wave analysis!

In response to our forecasts this last week, here are some comments from our clients:

It is truly amazing to see the power of the Elliott Wave Principle!

While far from perfect, its reliability is something we have not found to be challenged by any other system...

... in forecasting any liquid financial market.

And that is why we launched our Global Market Forecast service during this past week to our existing Dynamic Outcomes community with a special clients-only launch, covering 4 global markets under a new website and branding:

How did it go?

All I can say is, very well! We have had some wonderful take-up, feedback and support.

More information as to this new service can be found here

In other news, here were some other big headlines:

And that was that for the week...although only a fraction of all that happened, such as Fed's comments on repurchase operations flashing warning signs as to the economy!

As for the Rand, it closed out the week around R14.90 to the Dollar as per our forecast, with a lot of USD pressure taking its toll.

Well, as we head into the new week, where next for the Rand?

Our analysis on Friday showed clearly what we thought was most likely to happen.

(You can see the full details by taking our 14 day free trial)
As far as triggers go, there are a few medium size trigger events, such as:

But probably more focus will be on global events such as Iran-Saudi Arabia-US relations and Brexit.

But all in all, we expect another volatile week in the markets.

So, how do you manage your exposures?

As you can see from last week, we simply let the market itself provide us with the best guess of what was likely to happen - and it followed through perfectly.

How do we do this?

Through applying the Elliott Wave Principle (the study of human behaviour in financial markets) together with a unique combination of price ratio, momentum and time cycle studies to provide us with an objective view.

And, as you saw in the review above, a forecast like this gives you something that you can use to make objective, informed and actionable decisions. instead of emotionally-charged knew-jerk ones.

Based on our analysis, the next few weeks are likely to take many persons by surprise - please do not be one of them.

To get a look at what we are speaking about, use the link below to see the latest forecast: