An interesting few days, as the Boks brought it home and Moody's didn't drop the guillotine.

While the Rand was range-bound for the most part of the week, there was a significant recovery to below R15/$ which cheered Saffers no end.

And then it was the global stage, with US and China in the news again...

So let's get into the full review!

There were only two main conversations in SA on Monday morning: Moody's reprieve for SA and the Bok victory over England on Saturday in the Rugby World Cup Final!

It had been quite a finish to the week, that was for sure...

...but the far closer of the two events had been South Africa scraping by Moody's review of the investment rating. The outlook had been downgraded from stable to negative, but investment rating had stayed the same.

However, there was more to it than just that.

There are a lot of factors which come into the rating system, and taking a deeper look into Moody's different meters makes for some very worrying and interesting reading, such as:

The changes are significant and culminate in SA’s rating range moving down two notches, from the Baa1-Baa3 range, where SA was at the bottom of its assigned rating range, to Baa3-Ba2, where SA is now at the top of its new, far lower, rating range. (Baa3 is investment grade whereas Ba1 is non-investment grade.)

Why this happened is mainly down to SA's:

With the current trend, economists are revising their estimates of when SA will be downgraded should the economic situation continue...

...and at the moment, consensus has SA being downgraded in March 2020 - a very short time for Ramaphosa & co. to turn the ship around!

As for the Rand, it seemed to not get caught up in the detail of what was happening, and opened much stronger Monday on the back of the 'good' news: 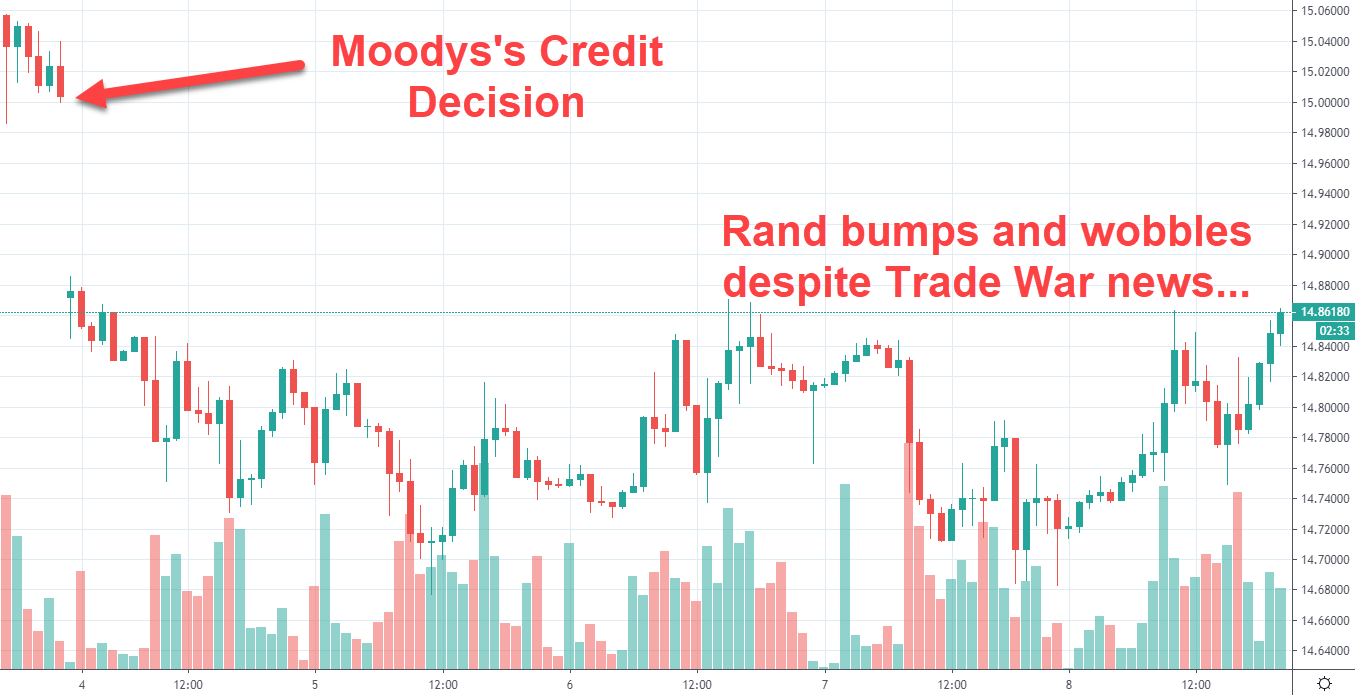 And in other news, we will take a look at others triggers that boosted for the Rand:

The week ended rather flat as the market moved back up from sub R14.70 on Thursday to close around R14.85...

It had been a strange week - despite the news, the market had been steady...just waiting for some clarity on the Trade War.

So, into the second week of November and this week there is not a lot to speak about in terms of potential triggers for market movement, with US Fed Powell's speech and US Retail Sales likely to be the highest impact events...

...but of course that doesn't mean the market is likely to be subdued.

So, for the Rand, we have managed to dodge the bullet from Moody's - what now?

Simply put, we tend to let the market itself tell us what is most likely to happen next. Our Elliott Wave-based analysis of the sentiment patterns suggests some initial upside is likely in the short-term, with 2 possible scenarios playing out - hence, we are still looking at some key levels to confirm direction in the coming weeks.

To get a look at what we are speaking about, use the link below to get access to the latest forecast update.