After a few weeks of positive Rand performance, a change in fortunes was surely coming...

...and come it did, in dramatic style!

In a week of events, news, shocks and disasters, the Rand went for one of the most dramatic loops of this year...(just how many have there been in the last 10+ months?!)

It was always going to be a critical week, which everyone has been waiting months for, but few were expecting as drastic a week as it turned out to be.

However, our forecasts gave some insight into what was going to happen before the week even began...

...so let's get into the full review!

Before the chaotic week began, we released our forecast with some insight into what to expect over the next few days...

...and it it did not make for good reading, if you were looking for continued Rand strength.

And what followed (as you already know) was quite a week...

Here were some of the many big talking points:

At the beginning of the week, the Rand was looking rosy, trading at just R14.60 odd, and moving lower over Monday and Tuesday to make a low of R14.51 to the Dollar...

...but that was as good as it got, as the slew of events hit:

This was all exactly as per our forecast, with the market bottoming at 14.51, and then moving higher. With the break above 14.70 now complete, we were expecting to see a break to R14.90 and possibly beyond...

And then we were onto Thursday: Mboweni's budget day...

...and this was when it all unraveled for the Rand: 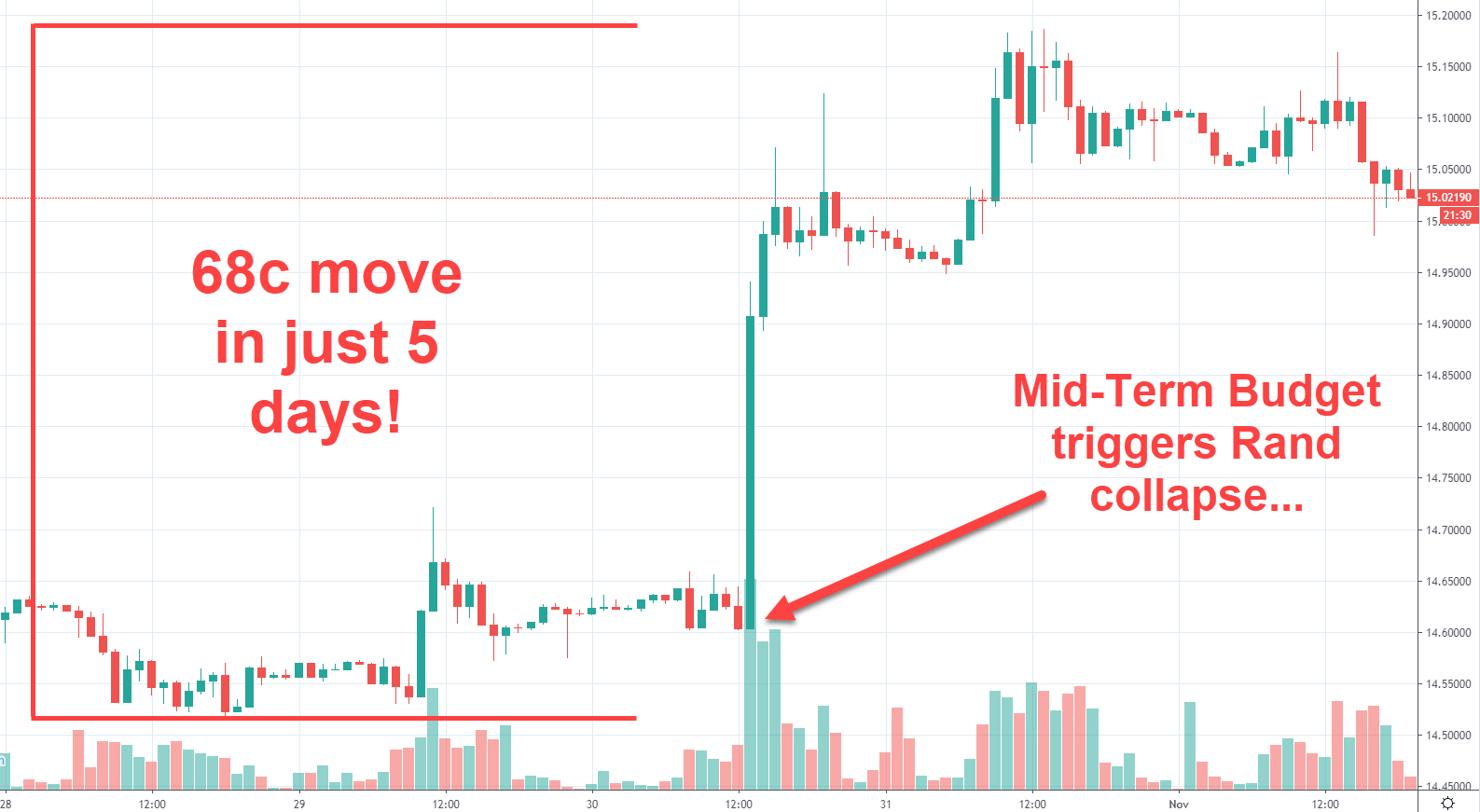 Mboweni's budget was a bit of a mess from start to finish...

He didn’t pull any punches when painting an alarmingly stark picture of SA's economic and budget deficit outlook:

The Rand triggered much higher, all of 30c in just one hour as these figures came out, and then up and above R15/$ over the following few days...

While this extension higher had been a bit more drastic than our forecast projected, it was per our patterns of where the market bottomed out and headed afterwards...proving the Elliott Wave Principle's resilience once again.

And then in other news from abroad::

As for the Rand, it strengthened slightly in late trade to hover around R15/$, after hitting a weekly high of 15.18 to the Dollar...

...BUT, and a big but at that, we were still awaiting the hugely important Moody's rating decision when trade closed.

This is of all importance to South Africa, that a stable investment rating is maintained, even if Moody's gives a negative outlook for the future. Investec warned following the budget speech that SA "could be junk status by Friday", but until market's closed, it was a guessing game...

And a few hours after close, Moody's came out with their verdict - maintaining the credit rating at (just above) investment grade, but changing the outlook from 'stable' to 'negative' - a lesser of two evils for sure, and it must be said a reprieve for the local economy!

And that was the wrap - what a week!

Phew, what a hectic week for the Rand, ending with the decision by Moody's to hold a lifeline open, but clearly indicating that time is running out for the SA government to turn things around...

Frankly, this still leaves the Rand between a rock and a hard place, but averting a downgrade has certainly led to a sigh of relief - for now!

So, into November and just two months left of the year, and we don't expect the roller-coaster ride to start slowing down at any pace soon.

This week sees a few events that could provide triggers, with US trade balance and Bank of England interest rate decision probably being the highest impact ones.

And, of course, who knows what impact the Springboks' performance in the Rugby World Cup will have on overall sentiment?

But, back to the Rand, where to from here?

Our Elliott Wave analysis suggests it is starting to run out of steam short-term, but we are looking at some key levels to confirm direction in the coming weeks.

To get a look at what we are speaking about, use the link below: