The Coronavirus fallout continued globally, with some of the once-in-a-lifetime charts playing out before our very eyes across stocks, currencies and more.

It was a Blitzkrieg on emerging markets as they saw double figure losses in value over the course of the 5 days.

Volatility in US Stock markets hit at an all time high, surpassing 2008 levels.

Quarantining continued across multiple countries, as we saw lockdown continue across nations like Italy, as Europe's open borders system has really shown it's danger in a fresh light to leaders.

As for the Rand...wow. It was not able escape the all out currency assault as it weakened to a 4 year low against the Dollar - levels not seen since #NeneGate of January 2016.

There is much to review, so let's get into the full overview.

Once again, there were more headlines than we could really keep track of during the week, but here were some of the biggest talking points over the 5 days:

Once again, we are left unsure of where to even start with this week's review.

In terms of the Rand, we had seen the markets close around 16.03 on Friday, and volatile trade continued on Monday which saw the USDZAR rocket up higher in early trade to hit R16.75 before the day was out!

This was following Ramaphosa's announcement of a state of emergency in the country, with travel restrictions and more being put in place...

...but the real trigger was the US cutting interest rates AGAIN, by a full 1%! This brought rates down to just 0.25%, the most drastic action yet, as the Fed tried to stay ahead of the curve. This was as per our predictions from previous weeks which showed the Fed just following the market...not actually staying ahead of the curve.

The JSE had one of its worst trading day's in history which saw it tumbling southwards in early trade: 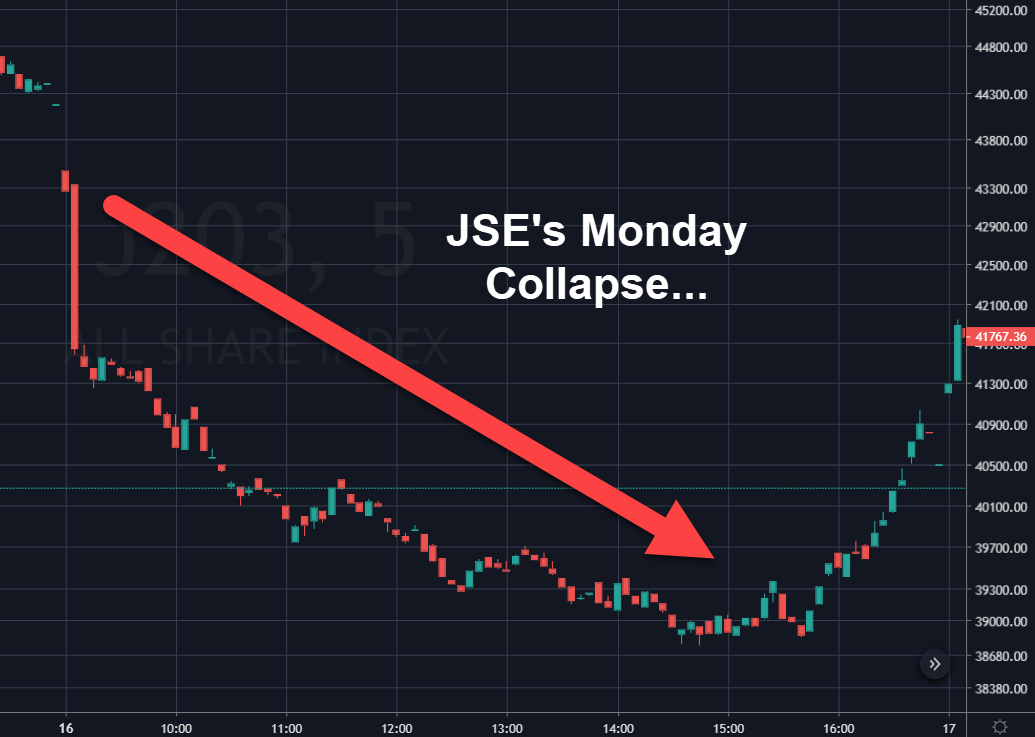 And this was just the start for the week, in yet another volatile 5 days of trade...

Stock markets opened around 15:30 SA time, and all out carnage followed.

In mere minutes, the first circuit breaker was triggered with markets more than 7% down.

By the time the trading day for the US ended, we saw quite a sight in terms of the daily trade:

It prompted the Fed to offer an additional $500 bln in overnight repo, as the economic fallout worsened.

Much debate has continued from the US surrounding economic stimulus, as well as relief for Americans who are unable to work - with Mnunchin, the US Secretary of Treasury, warning of risks of unemployment reaching as high as 20%, which would have a catastrophic global effect!

Reality was striking home in SA too, as cases continued to increase...

There was so much news, it is easier to run through it in bullet form for ease of reading:

These are certainly some very real and crazy days we are living in right now...

And the Rand was right in the thick of it as the drastic moves over the next few days saw the Rand soar to well over R17/$: 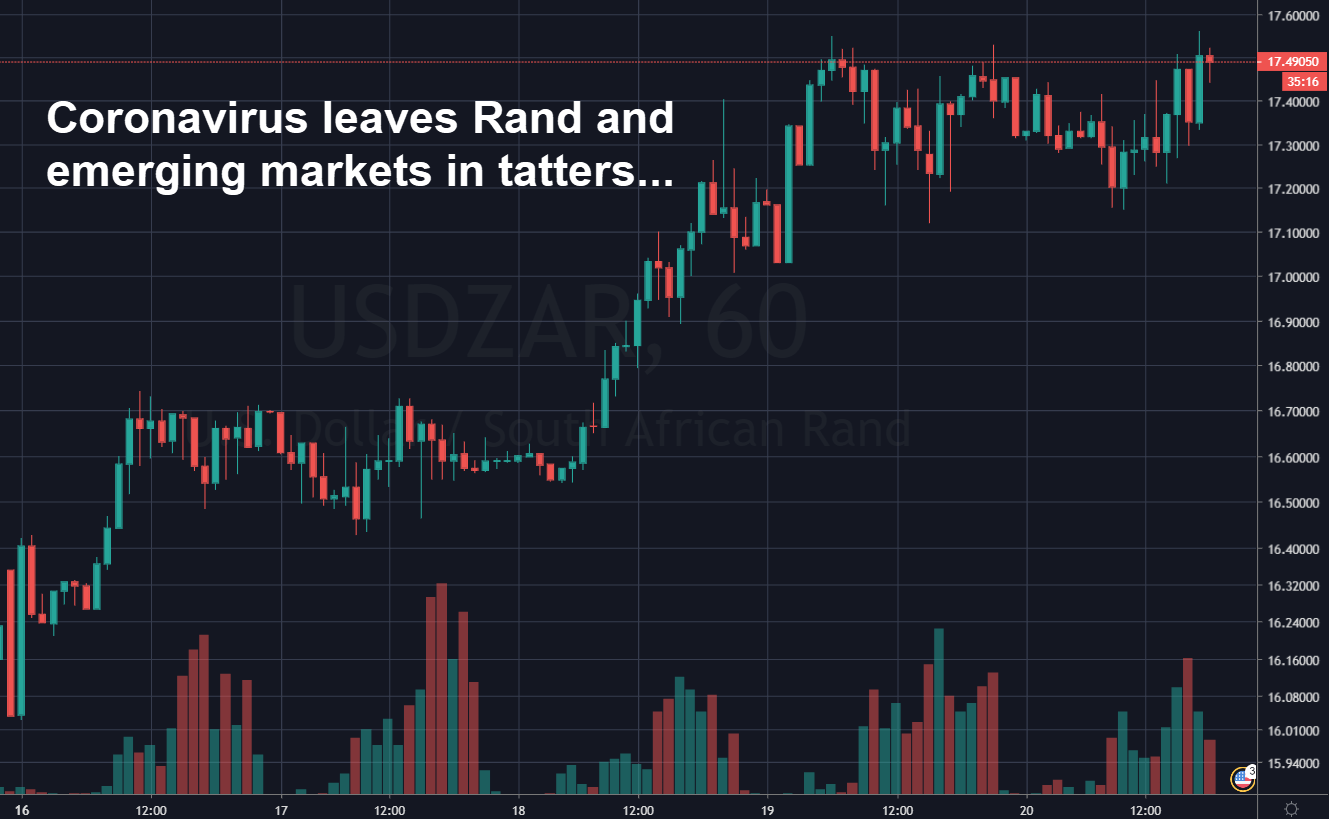 And then on Thursday, it was time for SARB to make their call on interest rates - and while all expectations were for a 50bps cut, Reserve Bank surprised with a full 100bps cut...

...such is the volatility of the markets at the moment, this was seen as fair for the situation.

In reality, this was a massive decision when we look back at history: 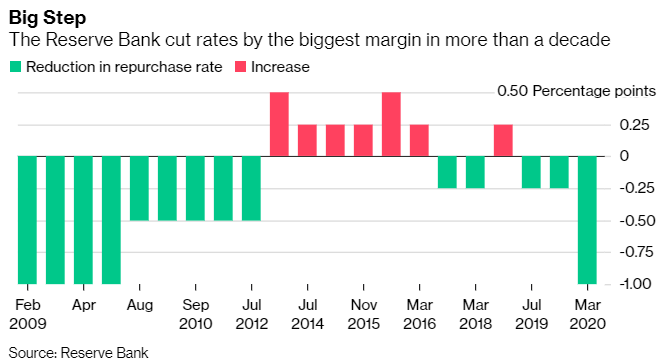 And what was even more concerning was the way South Africa's GDP charts now looked...they did not make for pretty reading. 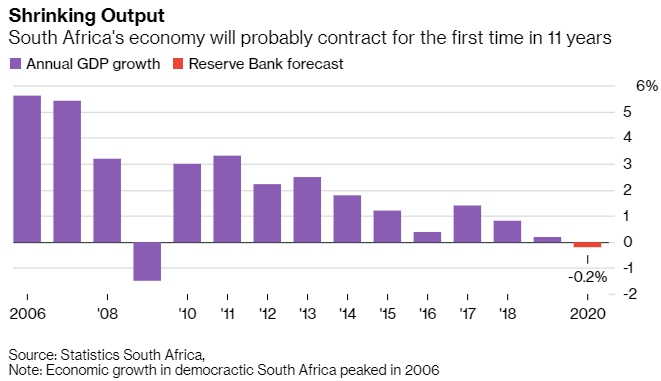 And in other news:

And so much more…we are only scratching the surface of all that is taking place globally right now!

The Rand traded to the close of the week around R17.50 to the Dollar, with an incredible 150c range during the course of the 5 days...

Tough times for business right now - with one of the few markets that persons were cheering on being Bitcoin, as it rose around 50% during the course of the week!

And that was the wrap...

As we turn our attention to this next week, there are more unknowns that knowns, as nobody is quite sure what is next.

Will the whole world become like Italy, in full lockdown?

It is heading that way fast...

...whether an overreaction driven by fear or not

The fact is that panic has taken hold of governments and citizens across the world.

So taking a look at the events upcoming this week seems a bit futile, because of how many more we are likely to see once things get going...but here are some of the biggies:

Late Friday brought news of the Fed to perform one trillion USD in overnight REPO (repurchase agreement) every day for the rest of the month...things were dire, and they knew it.

Just remember what we said last week though:

Remember that every market cycle goes from greed to fear.

...and then to despair

And then the market turns.

Be careful, keep safe, and play smart without getting caught up in the emotion of news and markets...

As for the Rand, we will continue to focus on what the patterns are telling us to give an objective view of direction...