And the Rand rollercoaster continues...

Just as the market thought the Rand was trending stronger, everything turned on its head again.

This time it was right from the start of the week, as the USDZAR 'gapped' all of 23c from the close on Friday to the opening on Monday.

It was a bad start to the week, and the trend continued!

But there was a lot more to the week than just the opening of trade...

...and we are here to take you through it. Read on for the full review!

Before the week began, we issued our forecast update out to our subscribers on the USDZAR on Friday the 19th. This was the Short Term Update for the next few days, and it showed that we were most likely nearing a bottom in the market and could expect ZAR weakness soon.

We expected that we had either already bottomed, or were about to in the 14.65-14.40 area, with an alternative (less likely) count of heading lower first. (see below - click to enlarge)

It was always going to be an interesting few days with a forecast like this!

And it was interesting too from a news point of view. Here were the main talking points from the week:

So, back to the Rand…

As we mentioned earlier, the week started with a bang - a market 'gap' of 23c is not something to be sniffed at.

However, as we often see with one of these moves, when there is that vacuum generated, the market often moves to fill it.

Which it did, as shown out perfectly in the chart from Monday: 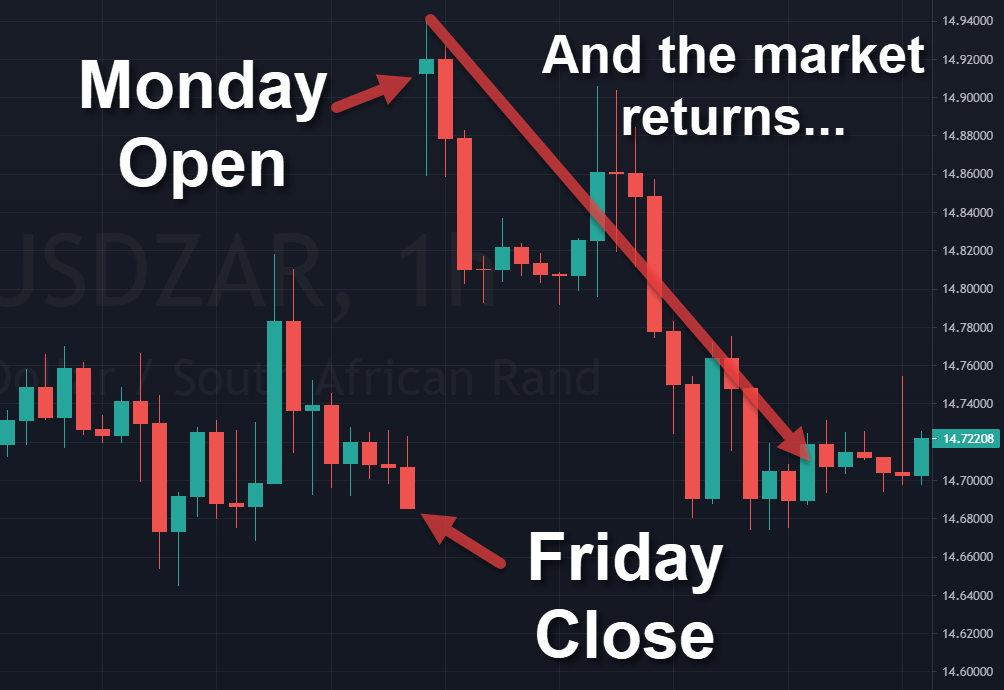 A volatile start...but this is something we have come to expect!

None the less, our forecast remained accurate and in play, and we waited to see what the coming days would bring.

And interesting news certainly did come, as the shipping industry became the focus of world news. Freight has already been disrupted and fairly chaotic for the last 12 months, but things got taken to another level this time with a huge Evergreen cargo ship getting stuck across the Suez Canal.

The result was that ships were blocked entering or exiting this key shipping route, and if anyone doubts how crucial it is, this one simple stat doesn't lie:

Every day that the ship sits there, it is affecting approximately $9.6 billion a day worth of ship traffic!
This is absolutely staggering, and gives an idea of just how many goods are moving around everywhere, everyday. And that is just one shipping route, albeit a very critical one!

With it possibly taking some weeks to unblock the Evergreen, this could severely impact trade and commodity prices in the coming months.

Locally, the big news was everyone waiting on SARB's interest rate decision which was on Thursday...

Thursday duly came, and by this stage the Rand was already trading weaker again, up around R14.95.

Reserve Bank announced the expected of the repo rate staying at 3.5%, and the prime rate at 7%. Expectations were also for inflation to remain contained into 2021, and GDP projections were upped slightly to 3.8% for 2021, rather than 3.6%.

Well, the Rand didn't think so, as it weakened further to break as far as R15.09 to the Dollar, right in line with our forecast expectations - as the Dollar Index pushed to it's best levels since November last year!

And then in other big news...

And getting back to the Rand, Friday saw the market pull back slightly from Thursday's push higher, ultimately closing around R15.05 at the end of local trade.

A rummy old week, but you would have to say the Dollar was back on top with the ZAR back over R15...

And as we rush toward April at a terrific pace, here are some of the events to keep an eye on during this week, especially Non-Farm Payrolls (very often a major trigger):

So where does that leave us as we head into the second quarter?

Well, the Rand has spent a very choppy 3 months between 14.40 and 15.66 and the longer we stay in this band, the more likely an impulsive move out of it.

The next couple of weeks will likely prove pivotal and based on our analysis, we will be watching key levels over the next few days.