Trust you are feeling refreshed and rested - and ready and raring to tackle the new year with vigour!

It was a very interesting period for the Rand during our absence, as we saw the market trade down as low as sub R14/$, despite all of the global tension and pressure.

This last week was no less interesting - with the US & Iran at each other's throats, markets worldwide were very volatile!

And that was before even looking at local developments...

...so we have plenty to cover - let's get into the full review as to how the Rand performed!

Here were some of the biggest talking points:

When the market opened last week, we were sitting around R14.25 to the Dollar, with the Rand having lost ground in the buildup to the weekend. The US against Iran conflict was very much in the world's eyes at this point in time, following the deadly drone strike from the US.

The situation between the US and rogue-state Iran is complex, but Trump had little choice but to take decisive action following the attack on the US Embassy in Baghdad.

Which he duly did - in taking out Qasem Soleimani, the mastermind behind Iran's operations and influence in the Middle East, and a renowned international terrorist of the magnitude of Osama bin Laden, if not more so.

...and with this, investors dumped dumped risky assets and flocked to safe havens.

Gold was up more than 1% and oil by $3 over concerns of future supply if war were to breakout in the Middle East. Things simmered over the weekend, as Iran threatened to retaliate. But things seemed a little quieter into the new week...

...that was, until Tuesday, when Iran sent missiles in to a US base in Iraq.

Safe havens like Gold soared to new highs, and interestingly enough Bitcoin was back over $8000. Oil was choppy and all markets other were taking rather a pounding!

The Rand also took off, hitting as high as R14.44 following this news, as it seemed that war was imminent with everyone expecting the worst... 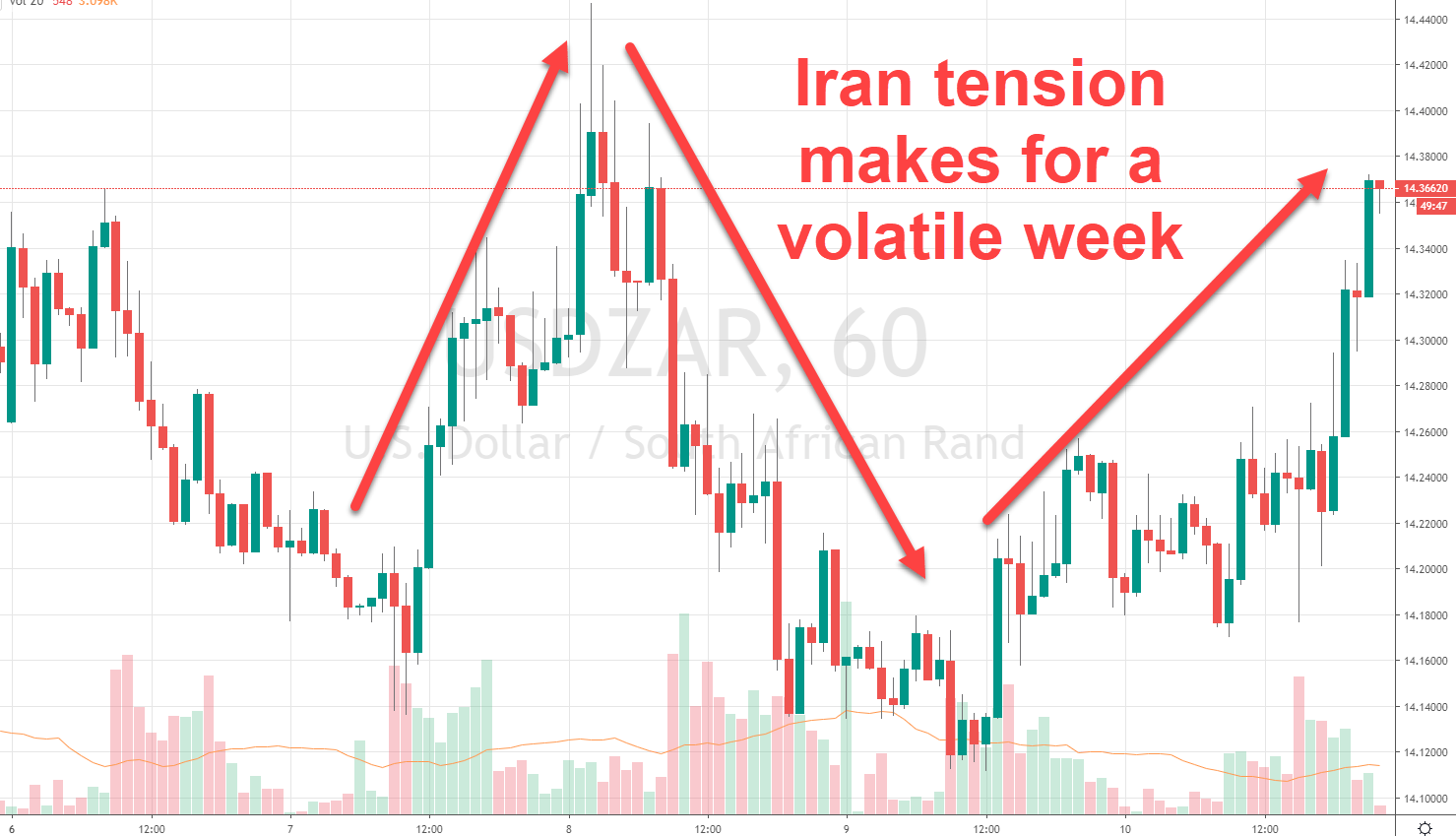 And then it all calmed down again, with Trump announcing that: “Iran appears to be standing down, which is a good thing for all parties involved”

The Rand recovered back toward R14.11 over the coming days, and all seemed 'well' again...for the moment!

But Friday brought a host of activity:

On the back of this, we saw the Rand weakening as high as R14.36 on Friday evening...

A rather sorry end to what had been a good week, but overall the ZAR only closed 10c weaker than where it opened - despite the tumultuous week!

Well, quite a week last week to jolt us into action...what will this week bring?

With US-Iran tensions still jittery, it will be interesting to see if things start settling down. Trump has certainly shown Iran that the US is not to be taken lightly.

And then, we also have the Brexit countdown, as well as an ECB Meeting and US Retails sales. And domestically, there is an interest rate decision.

And then of course we have Eskom...

As usual, we will be seeing what the Elliott Wave patterns are telling us, not the news. While the market remains below key levels, the bias is initially for more Rand strength...but it is unlikely to be one-way traffic!