And if we all thought that nothing could get any worse after the events of 2015, our esteemed politicians and government officials had other thoughts, packing a year's worth of shock events into just a few short weeks...

Since the Rand's Crashflash in January, the string of body blows have been thick and fast....

And with all the depressing news hitting the markets from almost every angle almost on a daily basis, the Rand should have weakened dramatically with every new punch, not so?

Well, so goes the common logic. But that didn't happen.

In fact, the market almost seemed to react in complete opposites at times, as shown in the below Chart overlaid with various events that unfolded. 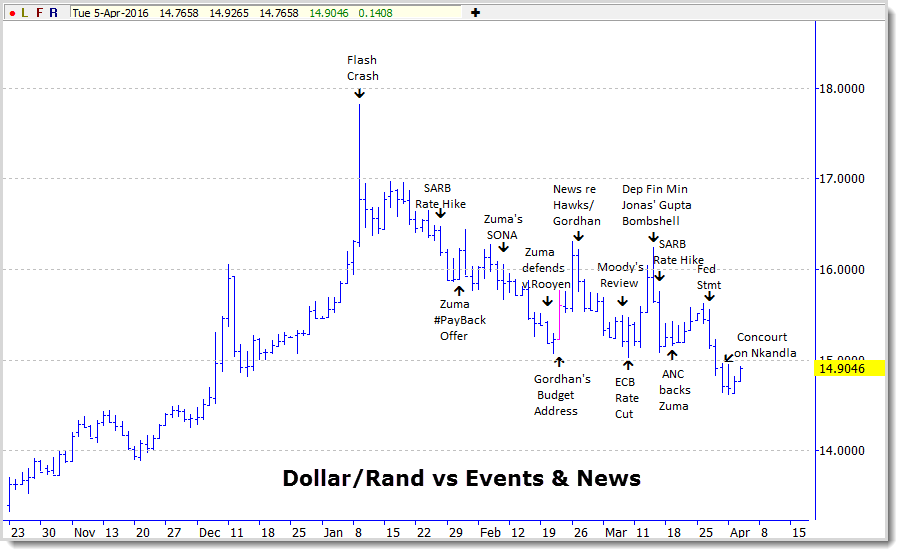 Here are the events as they unfolded, and how the market reacted:

How is that for a conundrum??

If any picture puts paid to the widely-accepted theory that

news dictates the direction of the market, this one does!

As you can see, news is often a TRIGGER (a catalyst), for a move in the markets....

....but it is useless for telling you which way the market is expected to head.

(there is no doubt that if you had tried trading this market based on the news,
you would have lost a packet!)

The reason is that markets are not moved by news, per se, but are moved by us humans...

...it is our reactions to these events that register in the market's fluctuations.

And, when involved in financial market decision-making, far from being objective and rational, the majority of persons act emotionally and irrationally.

You can see that this is clearly shown in the above chart.

So, how do you get any clarity on the market then, if news is so worthless in giving us a hint?

Well, the secret is that human behaviour is predictably irrational.

As humans, we tend to do the same thing in similar circumstances...

...and so these market patterns repeat themselves in a definable manner, according to the Laws of (Human) Nature.

This is the discovery behind the Elliott Wave Principle, which gives us a picture of market direction like no other forecasting method I know.

To illustrate, this what our Elliott Wave pattern count was telling me and my clients in terms of where mass human sentiment was going to drive the market during this very difficult period ... irrespective of the news.

How is that for a different perspective??

To repeat, of significance, all the above forecasts were made without any reference to (or consideration of) NEWS or EVENTS.

Which would have served you better during this volatile period?

It's not that Elliott Wave predictions will always work out this accurately (humans are not THAT predictable!), but as you can see, what it does give you (like no other system I know) is the following:

I believe this shows you the value of having an objective, scientific-based roadmap to show you the way and warn you (well in advance) of what lies ahead...

...especially when for most, it seem like you are driving in fog with your lights on dim and the road is full of unexpected twists and turns (not to mention potholes...)

But as they say, the proof of the pudding is in the eating.

And so, if you are interested in proving this out for yourself, I have a proposal:

I want to give you a 14 day pudding eating plan for free.

Try out our forecasting service at no cost for 14 days.

Then, tell me what you think. If you like what you initially see, I'll let you test it fully for another 60 days at a nominal investment.

And then we can talk about the way forward thereafter, and tailor something to suit your needs and your pocket.

And of course, all covered by my 60 day money back guarantee - no questions asked, so you are at no risk whatever.

TRY IT OUT HERE NOW

I am willing to bet you won't see the markets in the same light again!

And, if you get nothing else from this post, I trust you will now see the utter futility of looking to the NEWS for market direction ... once and for all!

Try out our forecasting service risk free for 14 days

Alex Paynter
« Previous Post Free Report - How to Use Rand Forecasts to Maximum Advantage Next Post » To Junk or Not to Junk Status? This is the Question!

To Junk or Not to Junk Status? This is the Question!

To Junk or Not to Junk Status? This is the Question!

Can Governor Kganyago Tame the Rand?

Can Governor Kganyago Tame the Rand?

Do YOU have Hot Bath Investor Syndrome?

Do YOU have Hot Bath Investor Syndrome?