Welcome to our Weekly Rand Review for 5 September 2016, where we take a look at how things unfolded last week and give you our thoughts for the week ahead.

Surely it can't get any worse?

That was the question asked at the beginning of the week...

And thankfully, some relief came right right at the end of another difficult week for the Rand!

It was not all good news though, as it steadily weakened to the Dollar once again, pushing to a new low of R14.75 in almost 2 months. Debates over Pravin Gordhan raged on, as parties from all sides came and gave their opinion.

However... another week ended with everyone still wondering and worrying.

Let us take a look at how the week unfolded...

Our forecast on Monday morning (see below - click to enlarge) showed the perilous position of the Rand at R14.4272/$. It was expected to be topping out shortly in the 14.45-14.73 area, and then correcting down.

As South Africa settled into another week, the Rand did push into the target area, and hit a high of R14.54 for the day. After business hours, it had strengthened back under R14.40/$.

It was very common opinion, inclusive of Goldman Sachs, that South Africa's credit rating would be cut and the rand would "buckle" if Finance Minister Pravin Gordhan were to be removed from his post...

A worrying prospect - and a very real one as well.

Tuesday showed more bad signs for the Rand, as it gave back gains again, pushing over R14.55/$ before the close of the day.

More parties jumped forward with their views on #GordhanGate, including ANC secretary general Gwede Mantashe's comments that "officials who are charged should step down from their roles".

One can't help but want to ask Mr. Mantashe gently, if he would be so kind as to first organize his party's leader to step down as president of the country!

Wednesday began well, as the Rand strengthened below R14.50 to the Dollar, until early afternoon, when, once again, the tables turned.

The Rand went into a freefall which saw it lose 35c in a few hours.

After a little respite, fear very quickly turned into despair, as the Rand pushed over R14.70/$ - its worst level since early July.

"What now? Where to now? Has the Rand's run come to an end?" Questions circled around the financial state of South Africa as a whole, while debates continued to rage on regarding Gordhan, pushing the sentiment steadily worse.

Thursday's outlook was going to be critical - I think most of our subscribers were waiting on the edge of their seats for this one!

The updated forecast (see below - click to enlarge) showed that the Rand was now expected to go a bit further into the R14.60-14.96 areas before topping out. A dangerous pathway was definitely ahead for the next few days, and all eyes were on the markets.

The market then strengthened from there onwards, for the rest of Thursday, as we saw the Rand back below R14.60/$...

On Friday, it strengthened further throughout the morning.

Just as there seemed to be a bit of stability in the markets, we began gearing up for the next big event: Non-Farm Payrolls combined with US Trade Balance going off at 14h30 on Friday afternoon.

Both are known triggers for big moves, and to have them happening simultaneously was bound to bring some action.

And boy, did it bring some action!

The Rand shot off at a fantastic speed - moving about 20c in a matter of minutes! Much volatility ensued for the rest of the afternoon and evening...

As it began to settle around R14.40 to the dollar, our forecast had been validated, as it had strengthened out of the target area as predicted. 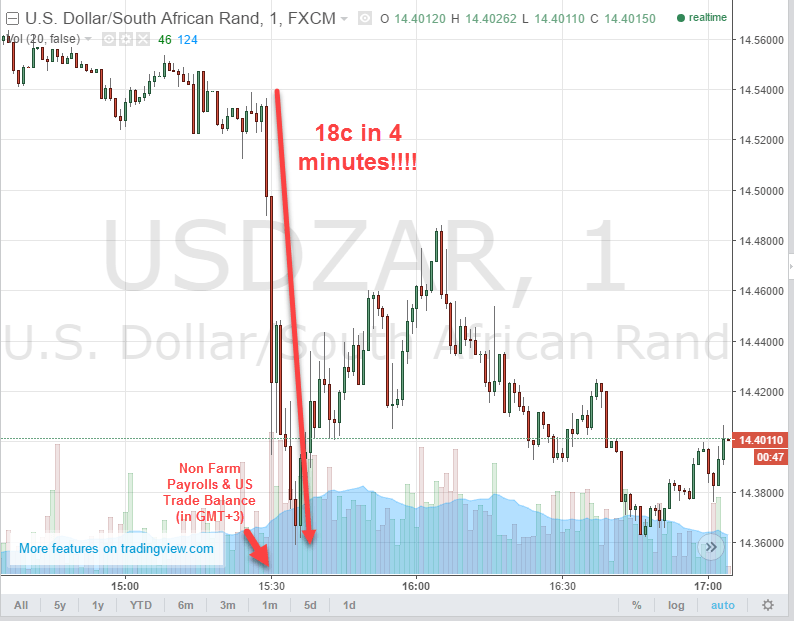 The markets are still not settled as we head into this week, but some progress had certainly been made from where we started on last week Monday!

Some fair sized economic events are due this week, and who knows what other ones are going to be tossed in by our esteemed politicians...? So much can happen - it advisable to not take your eye off the proceedings.

Already some good progress had been made, as the Rand has strengthened to below R14.40/$ - some relief which was very much needed.

However... is it a sign of things to come, or was it just a temporary correction?

The forecast our subscribers received this morning was important, as it was very telling as to what the next few days and weeks could be like...

This could be a crucial one if you have any Forex exposure...