Welcome to our Weekly Rand Review for 26 September 2016, where we take a look at how things unfolded last week and give you our thoughts for the week ahead.

A disastrous week. No other words for it...

...until the Rand pulled something out of the hat, late on Friday...

Some were caught horribly on the wrong side of the Rand's extravagant and worrying moves this past week.

The Rand strengthened about 40c during the first half of the week and then lost 60c as it pushed over R14/$ in the following couple of days...! And then, out of nowhere, it then strengthened over 40c back to trading at R13.65 on Monday morning!

Importers, exporters and investors were left scratching their heads as to what to expect next, with the effects drastically affecting profit margins and returns...

Let us review how everything could have gone so wrong so quickly for the Rand AND then turned it all around again, in just 5 days...!


Monday morning's forecast (see below - click to enlarge) showed that the Rand was due to strengthen from its position of 13.64 to the Dollar, before it would bottom out.

The Rand had already hit a high of R13.78/$ before we completed our forecast, and was already on its way down once we had done so.

Most of the day, the market just tracked sideways with no clear indication of some definitive moves. However...
...come Tuesday morning, the Rand acted!

In just 12 hours, it strengthened all of 25c, push all the way below the 13.45 mark. This left the Rand just a few cents off our target level of Monday's forecast...

On Wednesday morning, the Rand took a couple of steps further towards this target, touching R13.39/$ (just above the target area).

The optimism that was beginning to build was given impetus by the announcement of the takeover of SABMiller by London-based Anheuser-Busch InBev, with many touting that the $103bn inflow would push the market below the critical 13.20 level...

But, the Rand clearly thought differently.

In line with our forecast for an imminent reversal, the market turned and began heading quickly north.
By the close of business on Wednesday, the losses from earlier in the day were already sitting at over 20c, causing the jitters to start once again.

Thursday dawned with the Rand perched at almost the same level we saw first thing on Monday morning, and our Thursday short term update came just at the right time for you, one of our subscribers, with the Rand at a critical point.

Our forecast (see below - click to enlarge) showed that we were due for even more Rand weakness in the market, sending the Rand closer to R14/$...and possibly higher!

Disaster! Panic Stations! Horror! Headlines on Fin24.com said it all:

In the article, other comments were as follows:

This really does say it all. And it confirms something:

Almost no one saw this coming...

....Except for you, one of lucky our subscribers who had been warned...

One of our clients, Brian Keegan, said this:

"Your prognosis months back was for a continued strengthening of the ZAR towards Dec 2016 and it is playing out as you predicted. Amazing. Our politicians just cause issues in the shorter term. Based on your view, I have bought R180k worth of USD at R13.55 and R20k of GBP at R 17.73 (including the costs). I missed the bottom of the dip but not by much. I guess it must be quite satisfying for you when people use your data and make some good calls."

He is right - it is very satisfying to know that we managed to help him save hundreds of Dollars/Pounds (paying for a subscription cost many times over) in just one single week!

And then... just as we thought all the antics for the week were over...

The Rand pounced once again, moving under R13.70 on Friday evening! 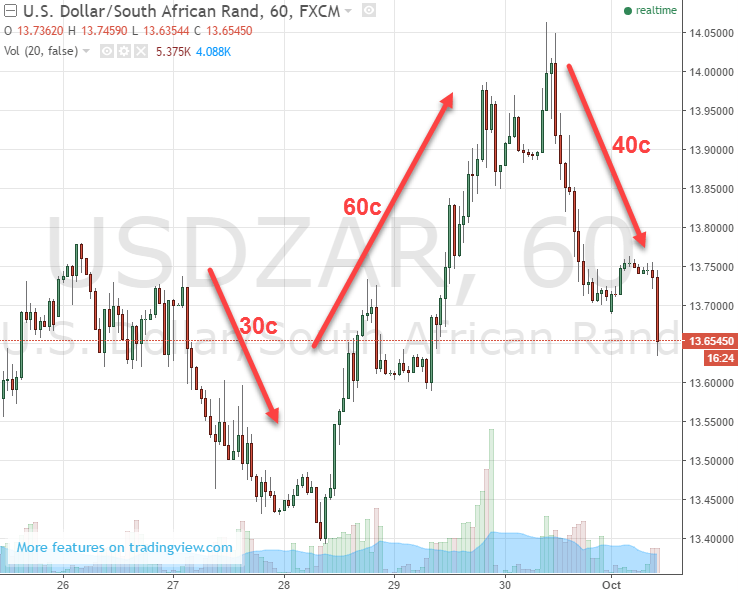 This once again validated our forecast, as the Rand topped out just above the idealized target area.

What a week! While category 5 hurricane Matthew rushed through the Caribbean with wind speeds of over 250km/h, South Africa was having its own hurricane with infamous volatile Rand!


We start the week with the Rand trading in the mid-13.60s to the Dollar - almost exactly where we began the previous week.

This week is due to be another humdinger, as the Rand volatility is clearly still high. Such drastic moves leave anyone with Rand exposures nervously worrying in anticipation of the next make-or-break market bounce.

Our Premium subscribers are being kept up-to-date with:

You could have seen so much coming this past week, had you had access to our content. Unfortunately, you were left in the dark as the Rand rose and fell an equivalent of over R1.00/$ in just 5 days.

We are due for a few more big economic events, and I would advise all those with access to our Rand Fundamental Events to not take an eye off of them.

Take our trial today to see how we can help you: