Welcome to our Weekly Rand Review for 24 October 2016, where we take a look at how things unfolded last week and give you our thoughts for the week ahead.

A stuttering week for the Rand, still reeling from last week's antics...

...however, some progress was made, albeit very small, despite the volatility.

The focus was still on Gordhan and all the goings on, as the 2nd of November court date started drawing closer and closer.

If this past week was any indication, expect the volatility and nerves to be climbing ever faster as these next 2 weeks play out. There is a lot riding on this case and the Rand will be expected to react accordingly. As for this week, we saw the Rand strengthen a tad, but certainly not convincing anyone that it was back to being stable again!

The story of the economic year is playing out before us...

Lets review the next chapter of this humdinger, to get some insight into the coming one.


Monday dawned with the Rand at a precarious position in the R14.30 levels. After such a week with Gordhan being summoned, nothing less could have actually been expected.

Our outlook (see below - click to enlarge) showed that we were due to be seeing the Rand moving into a higher area in the coming few weeks, according to the most likely one of the three possible wave counts we were trying to decipher.

This was all dependent on the Rand not breaking through the invalidation point of R13.9991.

Soon after, Rand was out of the blocks like a tracer bullet but not in the expected direction, as it moved against the preferred outlook forecast, and instead went with one of the other 2 wave counts we had running simultaneously (in hindsight, we should have included these alternate counts, but the probabilities were pretty low).

By the end of Monday, the Rand had reached sub R14.15 levels, and was not showing any sign of stopping yet.

Tuesday began with the rand continuing on its merry way, pushing closer to our invalidation. It duly hit this and pushed through with force below the critical level of 13.9991.

There are times like this when there are 2 or more valid wave counts that are playing out and, as frustrating as it is, the preferred wave count does not always play out, and we need the market to give us a hint through a break of a critical level to provide some certainty of direction.

But...what the Wave Principle does give us is a point at which we know our preferred outlook was is WRONG and we need to go with the next best count - which we now had (what other system gives you this?)

So where to from here?

We had been forced into an interim updated forecast (we never leave our subscribers wondering as to what is coming next).

With the break below 13.9991, Tuesday's forecast showed that the preferred wave count had changed completely, and we were now going to be seeing a move lower, into the R13.89-13.54 area.

(How critical would this forecast have been to your decision making had you received it on Tuesday? Were you still looking for the Rand to reverse and weaken again?)

A lot of the strength of the Rand was put down to more and more political and economic heavyweights coming forward in full support of his case...including the Vice President.
This was and still is critical to his (and the country's) future.

And the more come forward, the weaker Zuma's hand (in the till) gets.
But back to the Rand... 🙂

Well, it decided to behave once again, following our updated prediction on Tuesday and pushing below R13.90/$ without showing any sign of stopping.

As the news over inflation rates arrived at 10h00 on Wednesday, the volatility ensued again. Sharp but undecided moves saw the Rand whipsaw sideways.

It then began to strengthen further, before touching a low of R13.81 - right in the forecast area.

Unfortunately for the Rand...

...that was about as good as it got - as the market turned, and began to head the other way.


As America was gearing up and then watching the 3rd and final presidential debate in the early hours of South African Thursday morning, the Rand began to weaken again.

Our Thursday update showed an expected move up into the 13.97 to 14.10 area the next couple of days before making a short term reversal.

Over the course of the day, the same volatility continued as it was back over R13.95 again, and then further still on Friday morning, as it pushed strongly higher to make a top of R14.08.
Just when it looked like the Rand was pushing higher, afternoon trading pushed the market stronger again, confirming a top was in place at 14.08..

...once again, bang in the forecast area again

... isn't this Elliott Wave analysis thing kinda creepy sometimes (my wife still thinks so 🙂
Here is where we are at the time of writing, showing the high and the reversal since (click the image to get up-to-the-second charts and rates). 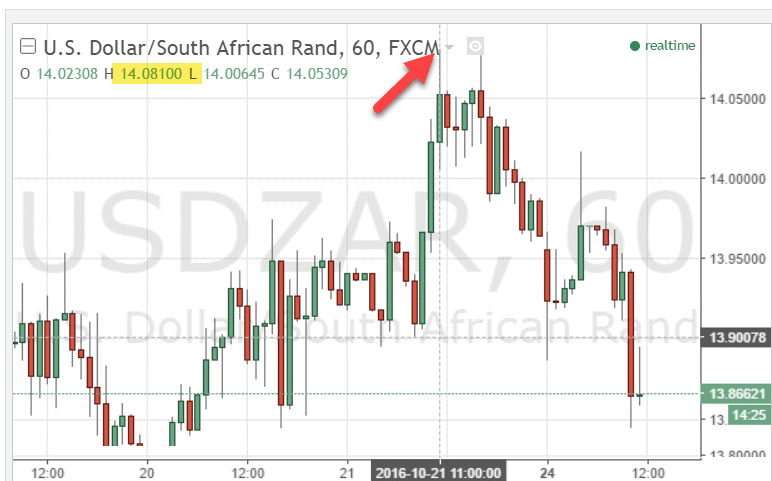 So what do we have to expect for this coming week?

The Rand is still as volatile as ever as we count down to another decisive day in SA's history: November the 2nd, Pravin's court date.

On top of that, we have the state capture claims and allegations going on.

And SA's exit from the ICC.

And the ongoing #FeesMustFall student anarchy.

The woes just seem to continue.

One thing for sure, one gets the feeling that the Rand is going to keep us on the hop from here until the 2nd of November - and very likely beyond.

It is a time of uncertainty, and the last thing you need is no idea whatever which way the Rand is likely to head. The result will (once again) be disappointment, anger, frustration and loss...

...I don't think I need to tell you what it is like when the Rand seems to be your worst enemy instead of your friend - time after time.

So, Alex, how are we to get through the build up to next week - and further out?

But it is an objective trading/management system that gives you what no other one does:

I have found from my own long experience - underestimate Elliott at your peril!

So as the allegations and accusations rage on, with corruption and state capture stories unfold (and who knows what else is being kept under the hat), our Premium subscribers can focus on what really matters to their decision-making, their bottom line ... and their stress levels...

These include our forecasts (updated twice weekly) :

Plus all these premium features:

, we have some uncomfortable weeks ahead of us. Please take our trial risk-free to see what a difference it can make to you: