Welcome to our Weekly Rand Review for 15 August 2016, where we take a look at how things unfolded last week and give you our thoughts for the week ahead.

Slow and steady, but moving the right direction.

That was the definition of this past week, as the Rand steadily gained in strength against all 3 majors, keeping up its amazing run. Although there was some retracement on Friday (as per our forecast the day before), the Rand had still had a good, successful week. Lets take a look at how it all panned out...

Another pivotal week began with the Rand around the 13.70 areas. It had lost some ground late on the previous Friday afternoon/evening, as strong US Jobs numbers supposedly strengthened the Dollar. Many were looking to see if there would be after-effects of the Municipal elections during the week, as coalition talks continued between the different parties in SA.

Our outlook on Monday morning (see below - click to enlarge) showed that regardless of any coalition or after effect of the elections, the Rand was going to strengthen.

And so it did.

Monday was a good day, and a steady one as well. The Rand slowly strengthened throughout the day, pushing closer to 13.60 to the Dollar at the close of the day. A certain air of calm was about the markets after the event-filled previous week.

Tuesday was a public holiday, and while most of the country took a bit of a rest, the Rand did not! After touching a high of 13.65 for the day, it pushed on downwards, leaving it below R13.45/$ by the close of business for the day. Positive sentiment was certainly still there, but mixed with some caution, with events like Brexit still firmly in the minds of all those involved in Forex.

South Africa's economy regained the position of Africa's largest in dollar terms more than two years after losing it to Nigeria.

Wednesday marked another successful day in SA's eyes, as the Rand continued its trend, strengthening with seemingly no sign of stopping. Before the close of the day, it had reached a low of R13.1987/$.

This was now the best rates we have seen the Rand at since October 2015, some 10 months ago.

This movement validated our forecast perfectly, as it moved into the target area and then a bit further, as predicted.

As often is the case after a period of good moves, the Rand was due for a bit of a retracement before the trend could continue, which was shown in our outlook on Thursday morning, as the Rand was expected to move above 13.40 levels, before it would fall further.

Thursday saw the Rand track sideways a bit, although retracing slightly as the day bore on. Friday was expected to have some slightly more definitive movement, after a slowish week.

As was the case, as the Rand climbed from its low of 14.25 on Thursday, to go as high as R13.50/$ to the Dollar on Friday afternoon on the back of US Retail Sales data to end the week 25c stronger than Monday.

Another market which reached a critical point this past week was the Euro vs the Rand. It saw the market move to as low as R14.76/$ as the reversal since November last year continued. Since 'Nenegate', there has been an almost perfect, consistent strengthening of the 3 most important South African markets (USDZAR, EURZAR, and GBPZAR). 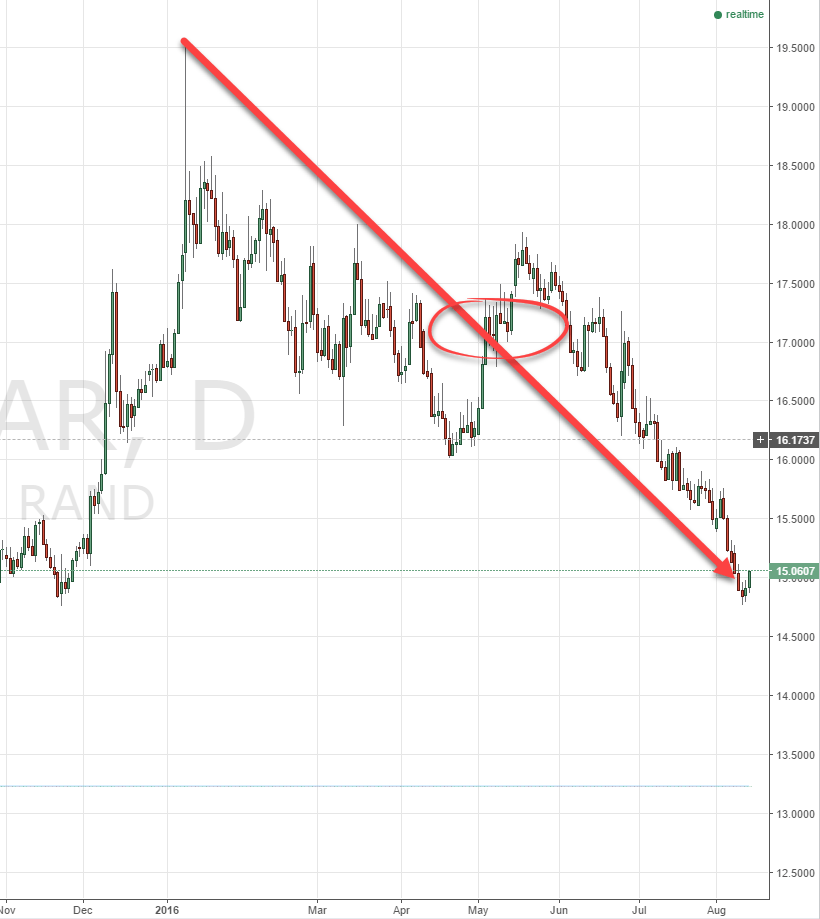 Here we see that there was one move out of the trend, which may have been pre-Brexit fears, or Moody's Downgrade fear, and in the end it was just a minor retracement in the big scheme of things.

Was this a surprise to you? Were you caught off guard by the Rand's movements since December last year?

If you were, then watch this space very closely, as we are about to unravel the following sequence of events in a coming Blog Post: Nenegate, Nkandla Upgrades, Brexit and more!

The fact is, however, that our forecasts were expecting this, no matter what happened with the unfolding political, economic or social events.

If the accuracy of this technology does not amaze you, then I am very surprised, as it still amazes me to this very day. Human's reactions and emotions must be some of the most difficult things to track, as they are ever changing and different with every person. Yet, with the Elliott Wave Principle, there is an uncanny predictability about human behaviour.

The week ahead does not have much in the way of major events or data releases, but that does not mean that the Rand is going to be quiet, if our updated forecasts of this morning are anything to go by. The results of coalition talks are of course of interest to the market, and could be a trigger for the moves we have forecast for this week.

For this reason, we expect the forecast we published this morning to hold steady.