Welcome to our Weekly Rand Review for 17 October 2016, where we take a look at how things unfolded last week and give you our thoughts for the week ahead.

This week was known for the ticking time-bomb which finally blew the roof off:

Everyone's careful planning throughout this week was blown out of the water on Tuesday morning, when the NPA annouced that it was issuing a summons for Pravin to appear in court on the 2nd of November.

The bombshell had been dropped. And the effects were seen.

All it took was that one moment, and the whole week turned into rather a mess.

However...did you know that we predicted this move with our forecast on Monday morning?

Don't believe us? Read on to find out how...

We are certainly not going to be lacking anything to speak about this week, so lets begin...


Monday began with the Rand trading once again in the mid-13.70s against the Dollar. Fair positioning, but nothing too definite.

Our latest forecast which was delivered early on Monday morning (see below - click to enlarge), showed quite a picture, with the preferred wave count showing the Rand was due to weaken...

...and not just weaken...but weaken sharply.

When we get forecasts like this, we often ask, "What news will hit the market to trigger such a move?"
Only time would tell.

It was even more to our surprise as we saw how Monday panned out. The Rand was absolutely flat, and ended up only moving about 5c from the beginning of the day to the end.

Calm seemed to have finally reached the markets.

"Had we got our preferred wave count wrong?" we asked ourselves.

...and then came Tuesday.

...which turned into D-Day.

In 2 minutes, all the damage had already been done.

And if you had exposures, you could have seen this coming from Monday morning, and could have acted accordingly before the news hit, and the Rand jumped

And you would have saved a lot of money. And stress...

However, it was almost mind boggling to actually see that political interference had once again reigned supreme, as Zuma & cronies seeked to remove someone who was just trying to do their job, in order to not have their corrupted agenda affected in the slightest.

As the story unfolded, the Rand did not become any more stable.

Jerky movement saw it push higher as the day went on, and further still on Wednesday morning, as it reached a high of R14.49/$.

The fact that the NPA has not gone ahead on the 763 corruption charges against Jacob Zuma, and is instead making a beeline for a single, small (and legal) act by Pravin, shows the whole situation for what it really is.

GordhanGate as it was named, had done almost as much damage as Hurricane Matthew in the Caribbean and America.

It was said that a total close to R34bn had been lost by the banks.

What long term damage had been done to investor interest and business in general, is impossible and probably too much to actually measure.

Just to keep SA's economy on the back foot, on Wednesday afternoon, the Rand reversed sharply and strengthened just short of 50c in 4 hours.

No economy can survive such volatility, and South Africa's was certainly wilting, thanks to these guys (courtesy of Zapiro): 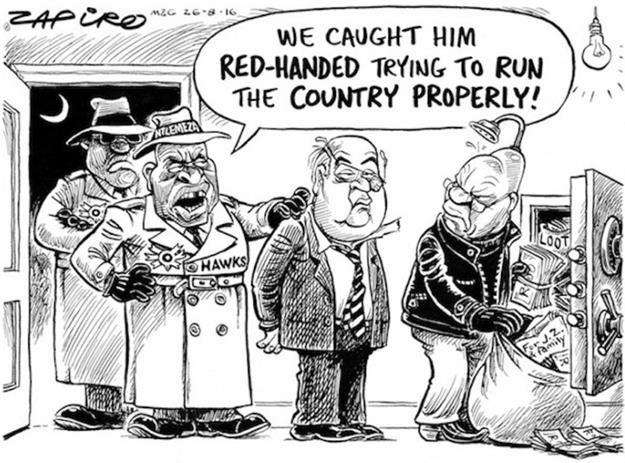 Thursday morning... Time for our next forecast.

A definitive one, that was for sure.

After such a rollercoaster previous 2 days, our forecast was a critical one to give our subscribers the pathway for the coming few days.

Unfortunately, this forecast is still valid and we cannot therefore share it here with non-subscribers.
However, click this link to get signed up for a free trial with 60 days of money-back guarantee (should you choose to subscribe after your trial).

It is risk-free. So why not give it a try?

Friday saw the Rand move back up to R14.40 areas with the pot of scandal still simmering. What exactly was going to happen in relation to Pravin was very uncertain, and the volatility of the Rand reflected that.

Persons began to pose the question:

Are we going to see a stable currency in the Rand ever again?

It remains to be seen, but for now, the rollercoaster was certainly in action.


Over the weekend, the next chapter of the story unfolded as Gordhan hit back with huge evidence against the Guptas, illuminating dodgy transactions adding up to almost R7bn!

Nobody quite knows what the next stage of this story is going to be or how it is going to unfold. We are in some very interesting times in South Africa's economy!

What is important to note is: this is probably the most volatile we have ever seen the Rand Currency.

Dangerous, reactive moves are around every corner. If you have any forex exposure, you need to have something guiding you.

Our Premium subscribers are being kept up-to-date with:

Last week was a real humdinger. If you are not a premium subscriber right now, I suggest you hop on board in order to keep ahead of the game.

Take our trial today to see how we can help you: