From 0-100 was the escalation this week, as South Africa saw its worst riots in history.

Bordering on a co-ordinated attack rather than a riot, with shops, businesses (and more) saw absolute destruction as thousands upon thousands of citizens orchestrated widespread chaos.

Estimates very difficult to pinpoint at this stage, but some numbers being talked about were in the order of 42,000 businesses affected between Kwa-Zulu Natal and Gauteng.

The knock-on effects of this are going to be seen and felt for weeks and months to come.

Right now, it is food and fuel shortages.

But who knows how much more will come?

So, apart from the #ZumaUnrest, these were the biggest headlines of the week:

So, to get back to the Rand and local events...

The market opened around R14.20, before the tide starting turning fast.

Violence was already stepping up a notch, and things were getting worse by the hour.

By Tuesday & Wednesday, it was full blown chaos, with entire shopping centres like Shoprite, Makro, and distribution centres like Distell and SAB getting looted and completely destroyed in some cases.

By Thursday, the official death toll was at 117, with 25,000 army members deployed in order to regain control.

Community groups mobilized, essentially to take the law into their own hands as the police did little to stop this anarchy - and they stood their ground to defend their own areas, homes and businesses.

But overall, very little could be stopped due to the sheer mass of persons and scale of the riots.

Millions, but more likely billions, of goods have been destroyed, supply chains disrupted lost and then there is the amount of job losses, and probably permanent business closures as a result.

The numbers are going to be impossible to get accurately - but it is damage that will never be recovered from in some cases.

The stupidity of the these rioters, is that they do not realize that tomorrow they do not have a source of bread, or any chance at income to even buy that bread, as their local supermarket is now gone. They now need to take a taxi just to get to another supermarket. This all adds cost, further worsening poverty.

It is a vicious circle, and one can only wonder what the end of it is, as a lawless Communist regime takes hold of the country, breaking it down piece by piece, bit by bit. The ultimate goal is always to break EVERYTHING down to the ground, and then rebuild it - because if you just do this, then communism will work. Wrong. It will never work. And never has. But the rise of Marxism in South Africa continues, largely under the covers of the 'plandemic' over the last year. They have used this to advance their agenda, and the results are now evident.

It became evident with time that this attacked was orchestrated, planned with precision by Zuma-loyalists, in order to cause as much destruction as possible.

As for the Rand, it took an absolute battering as a result of this 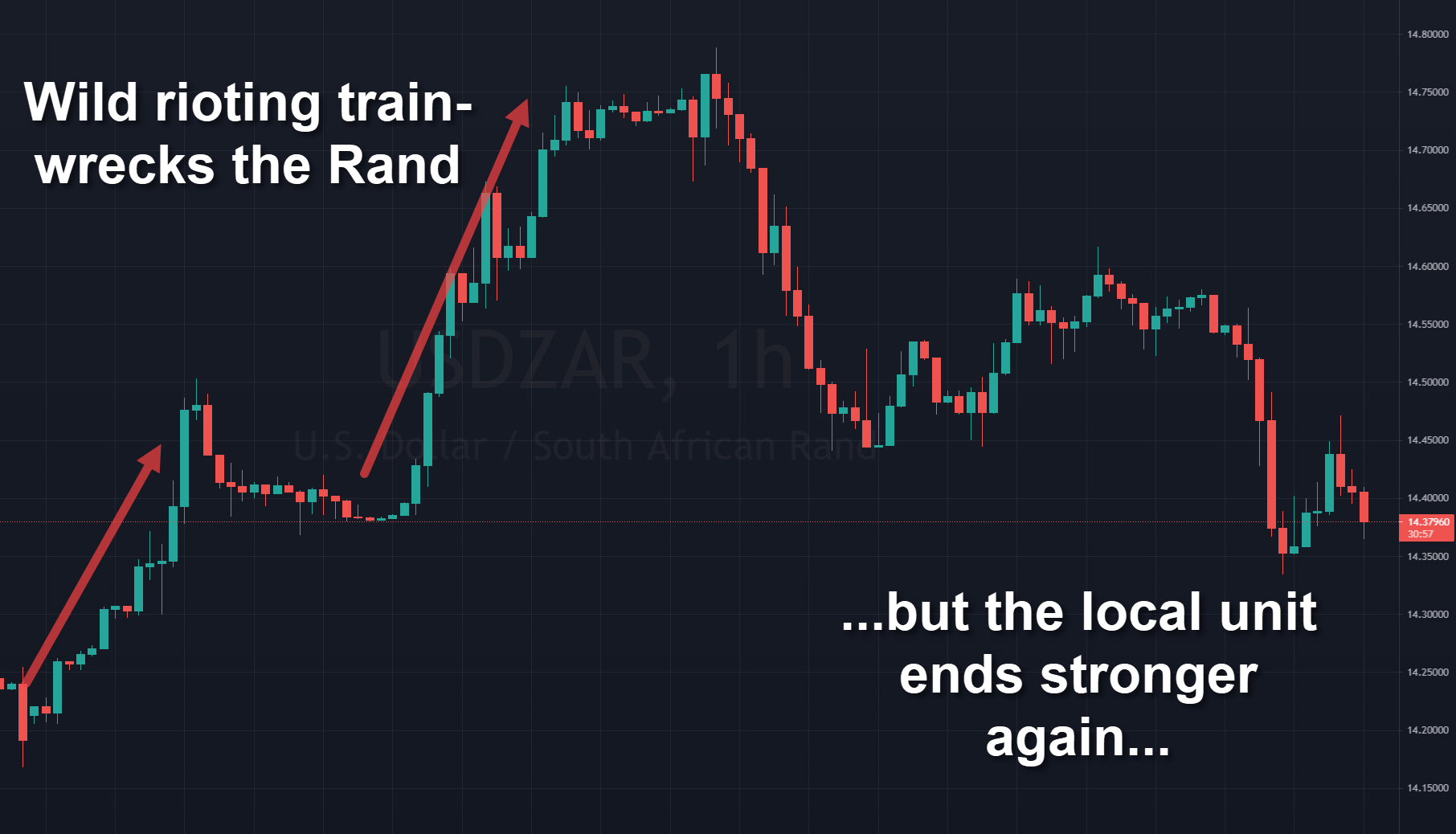 ...before recovering strongly at the latter half of the week!

In better news to end the week, we saw the Rand pull back some ground to sub R14.40/$ levels to close out for a crazy few days...

...what does the market have in store for us in the rest of July?

As we head into another week, there are a slew of economic events to watch, but most eyes locally will be whether we have seen the end of the #ZumaUnrest or if there is more to come...

The key point is that this is really nothing to do with Zuma being freed - and more an attack to disrupt and destroy the supply chains, distribution of basic goods and the economy as a whole.

This means there is no limit to what can happen next.

As for the economic events, here are the big ones:

So once again, plenty to keep focus on, and with everything else going on politically, economically and socially around the globe, we have learnt to expect the unexpected!

Once again, we will continue to filter out the noise and simply follow the what the charts themselves are telling us, based on our Elliott Wave based forecasting system.

Alex Paynter
« Previous Post Quiet Week for the Rand amidst Sideways Trade Next Post » Rand rushes towards R15/$...what next?