...only for the tide to turn again later in the week!

With the volatility of markets today, it is so hard to keep up with the frenzy - but for once, it was the Rand on top as the Dollar endured another week of pain.

It has been an astounding unwinding of Dollar strength since the March highs...

The Dollar Index (indicator of USD strength) is now more than 10% down from it's peak up just below 103 points, trading around 90 points.

But what has changed since March, when persons were using it as a safe haven?

Has anything improved economy/pandemic wise?

You could hardly say so.

...or rather the crazy, irrational emotional nature of the humans who trade the markets.

It certainly is an interesting game to watch!

Let's get into the full review of the week...

Firstly, here were some of the biggest headlines from the 5 days:

With the Rand opening at R15.18, all eyes were on the market to see what the next few days had in store, with a plethora of events coming up over the 5 days.

The question on everyone's lips who was watching the global stage was: is the trauma of the last few months of the US over?

Firstly, would the inauguration go off without a hitch?

And secondly, will everything be 'back to normal' with Biden as President?

With Washington DC in total military lockdown, Biden appeared to be inaugurated in a low-key event on Wednesday as the 46th President of the United States.

As for Trump, he departed the White House after a flurry of pardons and more declassifying of classified documents, and in his final speech promised to be back in some form or other (what cards does he have up his sleeve?)

But question number 2 remains to be seen, and logically seems impossible at this point in time.

Biden would be inheriting an economy that has suffered from the irrational and crazy lockdowns of the last year which have had little to no effect on the spread of the pandemic, and have only undermined the economy. Patch up jobs of economic stimulus are not going to work - putting a plaster on a broken leg isn't going to help anything.

These lockdowns were promoted by him and his colleagues throughout 2020, and it remains to be seen now as in charge, whether they take the same approach.

Everything changes when you are the helmsman, instead of looking from outside and criticizing the one at the wheel.

The problems are far deeper than what media generally likes to talk about, as government debt continues to spiral higher. Who is going to pay? Where does the buck stop?

I would highly recommend anyone reading this to take a look at Robert Prechter's view around the time of the US election last year, and how he spelled out that it doesn't matter who wins from one aspect, as either President is inheriting an economy and stock market that is primed for disaster.

Take a look at what he and Elliott Wave International have to offer over here. It will prepare you for the future.

Back to the Rand - the market rallied through the week, until Thursday the USDZAR was near breaking the R14.75 mark following all the events globally. 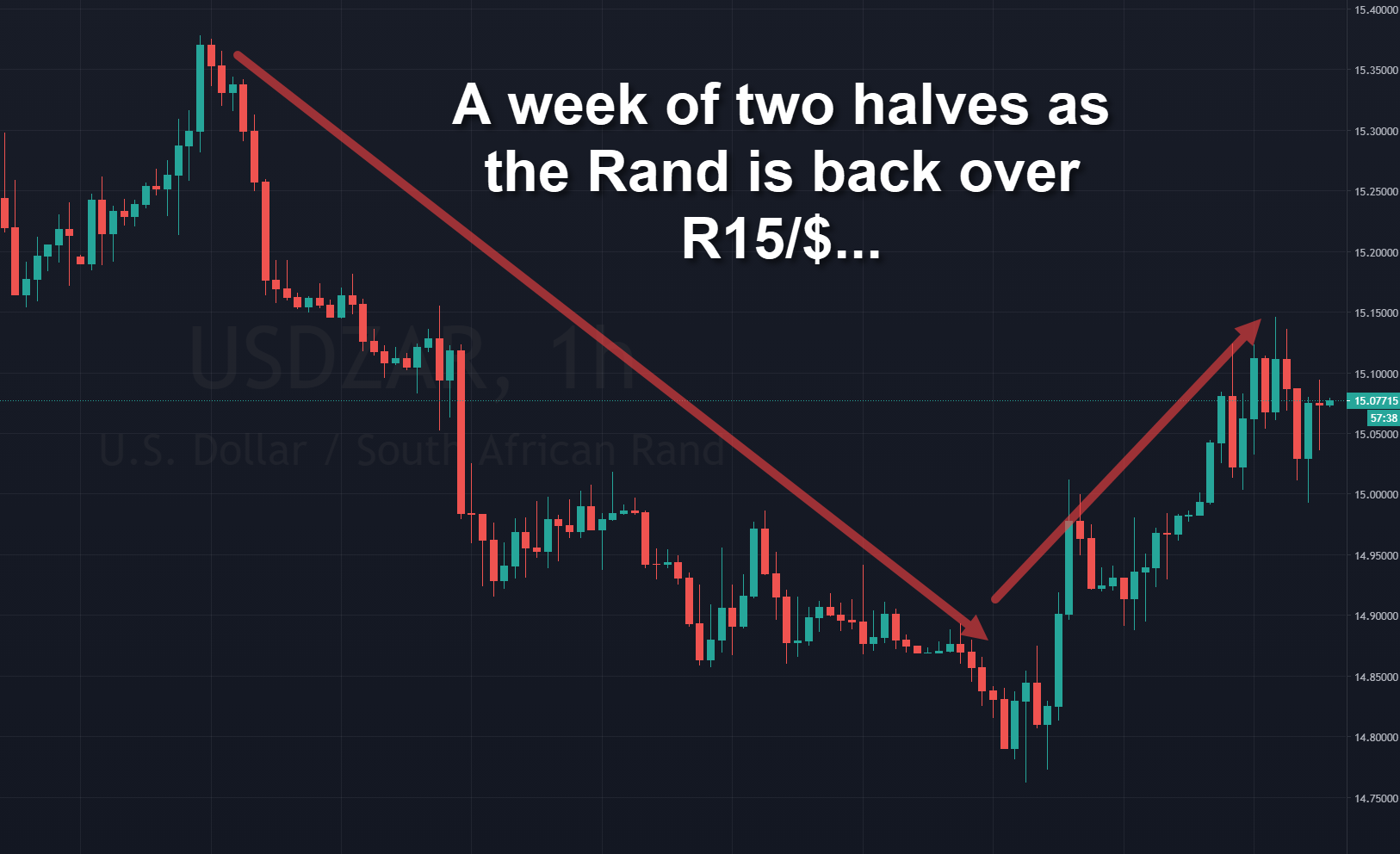 Getting back to the Rand, the end of the week was not as pretty as the start, as late on Thursday we saw the tables turn once again, sending the market over R15 to the Dollar.

Topsy-turvy days...ones in which you need a guiding hand to help you make your forex decisions as informed, and without being affected by the emotion of it all. Read on to see how we can help with that.

There is a lot of concern and anxiety about globally with the fallout from last week's events in the US and as we head into the new week, all we can say at this point is:

As for the Rand, our Elliott Wave based forecasting system has served us well in calling the recent lows and we will continue to look to it to give us direction for the days, weeks and months ahead.

Alex Paynter
« Previous Post US Volatility aplenty as Rand recovers...where next? Next Post » Rand Volatile Amidst Run on Wall Street