The Rand has been on nothing short of a rollercoaster, and who knows when it is going to stop.

Just when we thought things were slowing down and the local unit was making a comeback, the tables turned again and we were back rushing toward R15.50/USD, R18/EUR and R21/GBP.

But let's get into the full review and see what we can make of the triggers and movements that we had, and then see what the days ahead look like.

Before the chaos of the week began, we released an update to our subscribers:

The outlook was pretty simple - we were trading at R15.03 to the Dollar, and our expectation was for the market to head a little lower before we would see it bottom out in the 15.08-14.89 area, before heading weaker to the Dollar, to R15.31 and above. (see the forecast above - click to enlarge)

And the first half of the week, this was just what we saw.

The Rand was quick out of the blocks on Monday, pushing lower from just above R15 to the Dollar, heading down into the R14.80s by Tuesday evening...

...but that was when the tide turned, just as our Elliott Wave based forecasting system had called it. 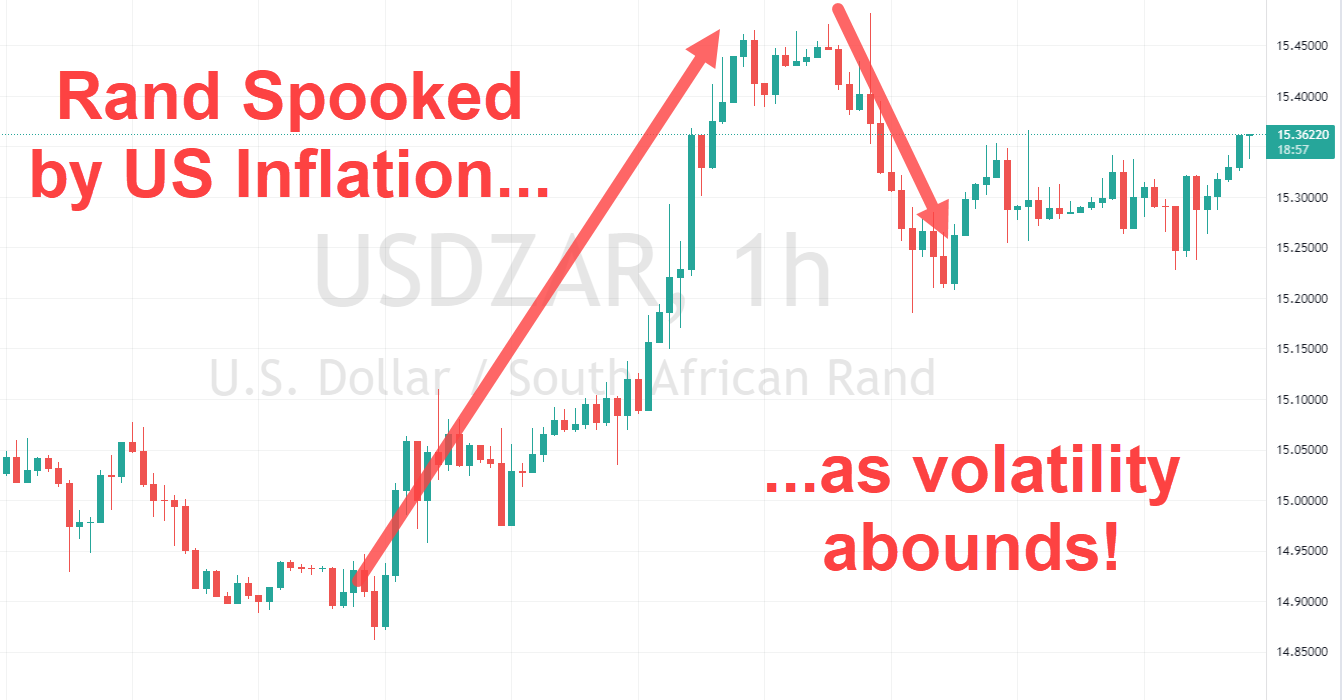 A nothing short of insane turnaround had seen a more than 50c loss in that short space of time, and the week was looking very different by Thursday morning.

This week was meant to be all about the big event on Thursday - the Mid-Term Budget Speech by the new finance minister.

But before we had even gotten there, the week had already exploded into action!

Wednesday's news was also big though, as the latest US inflation figures came out, giving an update on the state of the US economy:

For what seemed like the first time since he came into office, Biden acknowledged and admitted that the inflation is a real problem. What has been passed off by both the Biden Administration and US Fed as just being a "brief transitional period" or words to that effect, has in fact started to have real, measurable and bad results. Biden committed to bringing prices down, making sure supply chain issues are fixed, and getting people back to work.

Despite Biden's comments, the markets were spooked, and emerging markets particularly, took the pounding that we saw in the Rand.

But then getting back to the Rand...

On Thursday, we saw the winds of change come back through the markets as the Rand pulled back a huge amount of ground on the Dollar, Euro and Pound - with the USDZAR touching R15.18, R17.41 to the EURZAR and R20.36 to the GBPZAR.

But on Friday, the prior trend resumed and we saw the market tracking back up towards the previous high's of the week.

...what a week, what volatility!

As we head closer toward the end of the year, the volatility and action doesn't even seem to be showing a hint of slowing. It has been nothing short of frantic, and at this rate, no one seems to be expecting it to slow before the end of the year.

In terms of events in the week ahead, there are a few of note to watch for, most of all the SA Interest Rate decision, as markets and investors digest the mid-term budget speech:

Once again, we will be watching the markets closely, especially some key levels (based on Friday's updated forecast) to confirm our most probable outlook for the days and weeks going into yearend.