It was a case of déjà vu for South Africans at the start of the week, as it felt like the same nightmare playing out all over again, with President Ramaphosa reversing some of the lockdown restrictions that had previously been lifted.

Were we going back into full lockdown?

Maybe you say it was only a few restrictions put in place - but the fact is that it was a 180 degree turnaround to how the last few weeks have gone.

The reality of everything being reversed was too much for any business owner to hear...

...and surely this was going to drive the next wave of negative sentiment, especially for the Rand?

As we saw this week, with the Rand playing its games again.

So let's get into the full review, so we can see what happened over the 5 days.

Over the course of the 5 days, here were the biggest talking points:

Unfortunately, the week began with a black Monday despite the Rand stronger at the R16.70/$ level at the South African open.

Ramaphosa's announcement the evening before had put a real damper on the de-lockdown efforts, with uncertainty back again as we waited to see whether the ballooning case count would continue.

The restrictions themselves were not show-stoppers for all business, but just provided that feeling of "we are far from out of the woods".

And that feeling is quite right.

Apart from even the exponential growth of the virus, hospitals across the country are becoming more and more overwhelmed. The Eastern Cape's facilities have been exposed by the sudden influx of cases, so much so that they are not even able to deal with normal patients, such as births and simple operations - let along the sanitary problem of rats feeding on waste around buildings such as Livingstone hospital.

The BBC did a shocking reveal of the situation in some of these hospitals, as many staff spoke anonymously to describe what is going on inside the facilities.

If this is not yet the peak, there could be a whole lot more trouble coming yet.

One would imagine this to be panic stations for the Rand...

...but in true, counter-to-the-news fashion, we saw the market strengthen despite this: 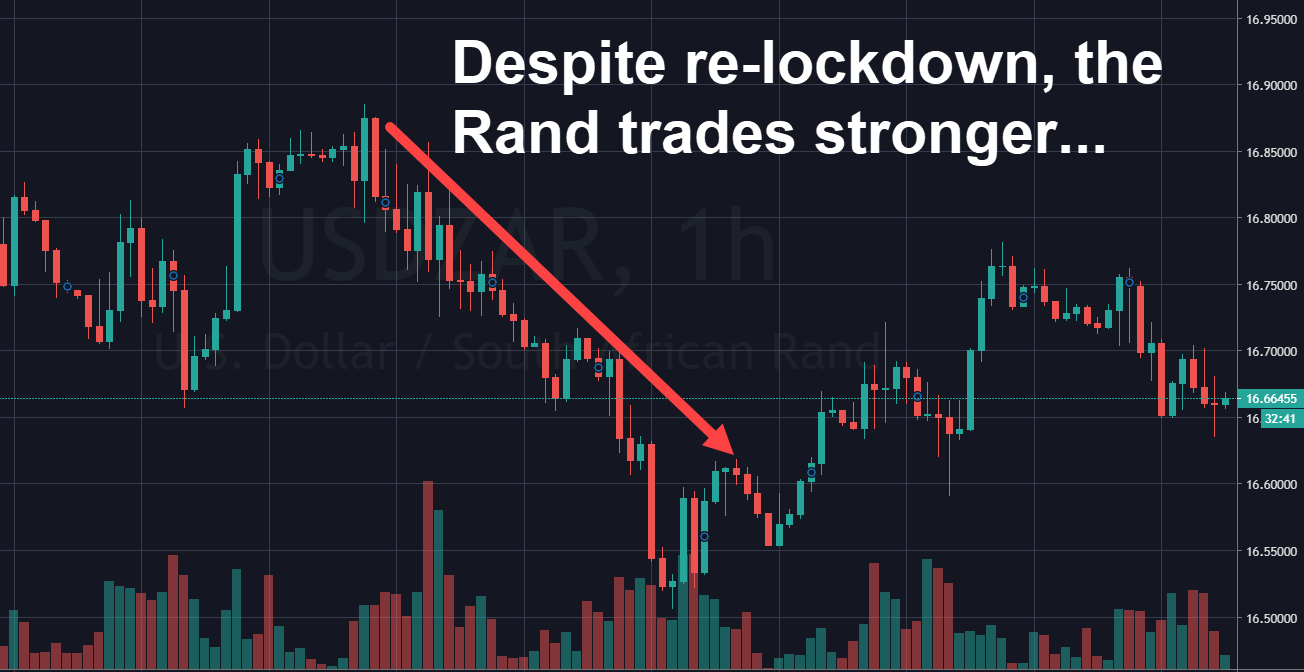 This was actually in line with our forecasts from last week, where we showed on the 8th of July that we expected to see the Rand strengthening further from its perch just under R17/$. The target area showed us possibly testing as strong as R16.57, which was just what we saw over the following 7 days. (see below our forecast - click to enlarge)

Our Elliott Wave based forecasting system called it again.

The markets are a funny old game, hey?

In other news, we had plenty happening:

As for the Rand in all of this, it continued to benefit from the Dollar's weakness as we saw the ZAR test as strong as R16.50, which was slightly below our ideal target area, but didn't invalidate our forecast.

So when is the bubble going to pop?

Well, with the Dollar index now down more than 6% from its March highs, a bounce must be coming sometime soon - at least, according to logic. If you would like to get on the inside track on this when it comes to the our Elliott Wave based forecasting system's count on this market, check out our Global Market Forecasts here.

And that was the wrap, as we hit the South African close on Friday with the ZAR still sitting pretty at R16.65...

As we look to the week ahead, we have a number of importants events coming up over the next few days in SA & the US:

The Rand has had a good decent run, but it does appear that it is running out of steam, and the above news could well provide some triggers...

...and that is not even including the emotions already running high with so many ongoing local and global issues, US/China tension and trade wars, middle-east tensions and more.

With all of these events, what it melts down to is mass human sentiment.

The balance of all the emotions of all the persons involved in the Rand market will dictate where the market is headed...

...and those same emotions are your worst enemy.

When the market is highly volatile, it is extremely difficult to make rational and educated decisions that often mean doing the opposite of what your emotions are telling you.

And that is why we rely on our Elliott Wave based forecasting system to give us a scientific-based objective view of where the market is likely headed in time and price.

Based on the current analysis and forecast, we expect a few surprises (for the unprepared) the next week or two and again, we will be closely watching some key levels to confirm or invalidate our preferred outlook.