Well, well… as the endless repetition of the tightening and easing of mindless, ineffective lockdowns continues, the future remains as uncertain as ever.

For once, this week it was a move in the right direction for SA as the country headed back to Level 3.

For how long, is the question?

The indecisiveness of governments and using draconian methods proven to be completely unsuccessful means nobody quite knows what is going to happen next.

For now, the Rand caught a bit of a break.

But long term signs are worrying due to IMF and other institutions views on the economy.

Let's take it one step at a time, and dive into the full week's review...

Before we the week began, on Friday we had the market at R14.8514, having endured losses throughout to the Dollar. Our forecast was issued with the outlook for the coming days, giving guidance to our subscribers. The view was clear, with the market expected to push even higher to target toward R15, into the R14.92-15.20 target area. (see below - click to enlarge)

So, before the week had begun, the call had been made about where we would go...now it was just to see how it worked out.

News often provides triggers for movement, and these were the biggest headlines from the 5 days:

So, the week began with the best news possible, that SA had downgraded from level 4 to level 3 in terms of lockdown restrictions, thanks to Ramaphosa's announcement.

What did this mean?

Well, these were the changes to Saffers's life:

Small changes, at least something - yet not nearly enough, considering that these measures have proven to have no beneficial effect whatever - in fact, just the opposite!

But surely good news for the Rand after a tough previous week?

You would think so...

This brought it right into our target area as promised on Friday, as the market was once again acting the opposite to what logic would suggest.

But from then on, the tide of the week turned. 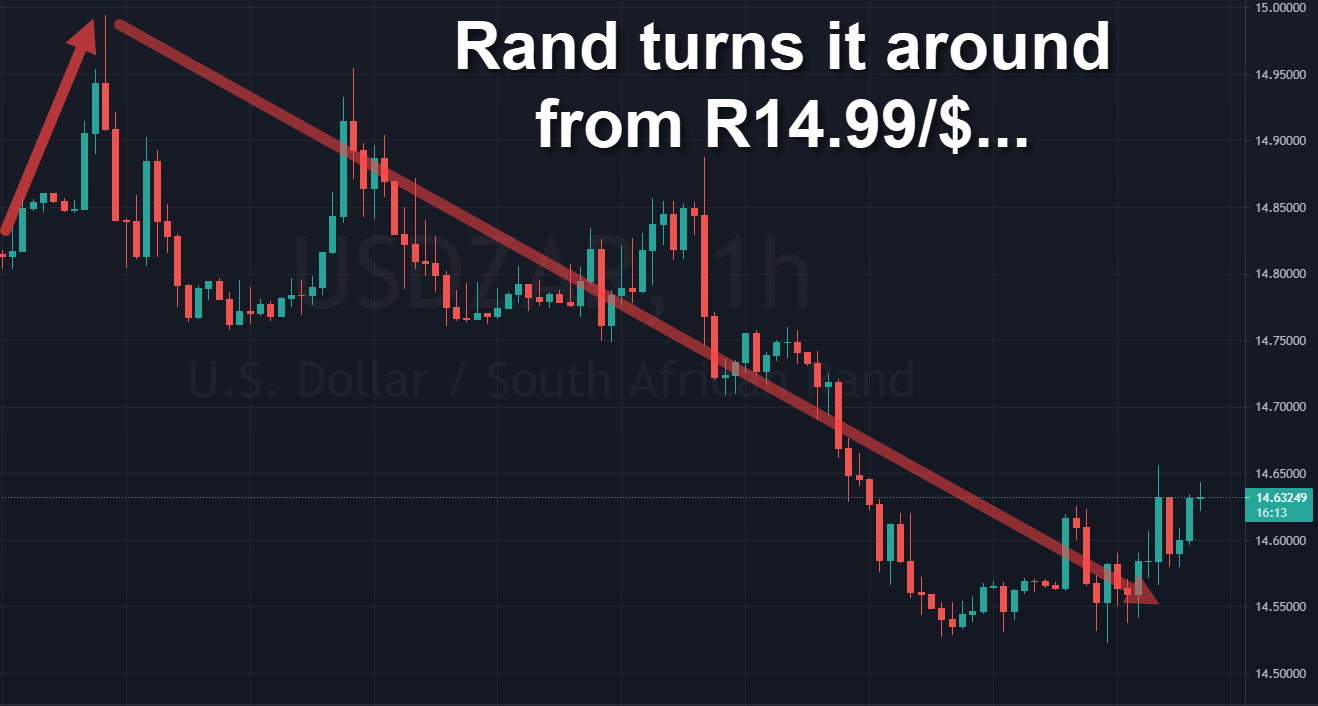 And for consumers and importers, it could not have come a moment too soon, as the worrisome R15/$ level was not one locals wanted to see again - but a level that exporters welcomed, having not seen these rates since 4 months ago.

And eventually getting back to the local unit, we saw the market inching its way back, particularly after the US GDP announcement.

Before we knew it, on Friday we were back testing nearer R14.50 level once again, eventually closing out just over the R14.60 level.

What a week it had been, despite all news, the Rand had managed to turn things around...

...or rather, the Dollar's weakness had given the Rand some respite once again.

Either way, it was a welcome bit of relief for locals! And that was the wrap!

And just like that, we are through July and into August.

This next week does not have a ton of events, but the ones that we do have are known to be some of the larger triggers, with Nonfarm Payrolls being the biggie:

The Rand has had some respite for now, but the question is for how long?

We have some levels we are watching which should give some indications for the days and weeks ahead - once again, we will continue to filter out the noise and simply follow the what the charts themselves are telling us as to how far, based on our Elliott Wave based forecasting system.

Alex Paynter
« Previous Post Rand rushes towards R15/$...what next? Next Post » #Reshuffle leaves Rand in a mess...where next?