This was a week which could not have ended a moment sooner for most...

...the Rand had a roller-coaster week of note!

As most got to work on Monday morning, it would have been disheartening to see that the Rand was already at R14.50 odd, and the week had only just begun.

Little did many know, until they looked a little closer into the charts...

It then raced back from where it came, creating the most volatile period since the end of 2015 or start of 2016, when it comes to ZAR markets.

One helluva start for the week, but the volatility didn't stop there... But why, and where to from here?

The prelude to all this action actually came from Turkey. A crisis had hit in the Middle Eastern country - a financial one, and it was causing havoc. That havoc spread beyond just Turkey itself, as all emerging markets as well as the Euro took severe strain.

But there were many more events worth mentioning:

Well, where to start?

Simply put - the Rand fell out of bed early on Monday - with a bump!.

Waking up just after midnight, with an ominous 17c gap from Friday's close, the local currency seemed to just snooze restlessly for a couple of hours....

And then around 3 am, out of nowhere - it happened: 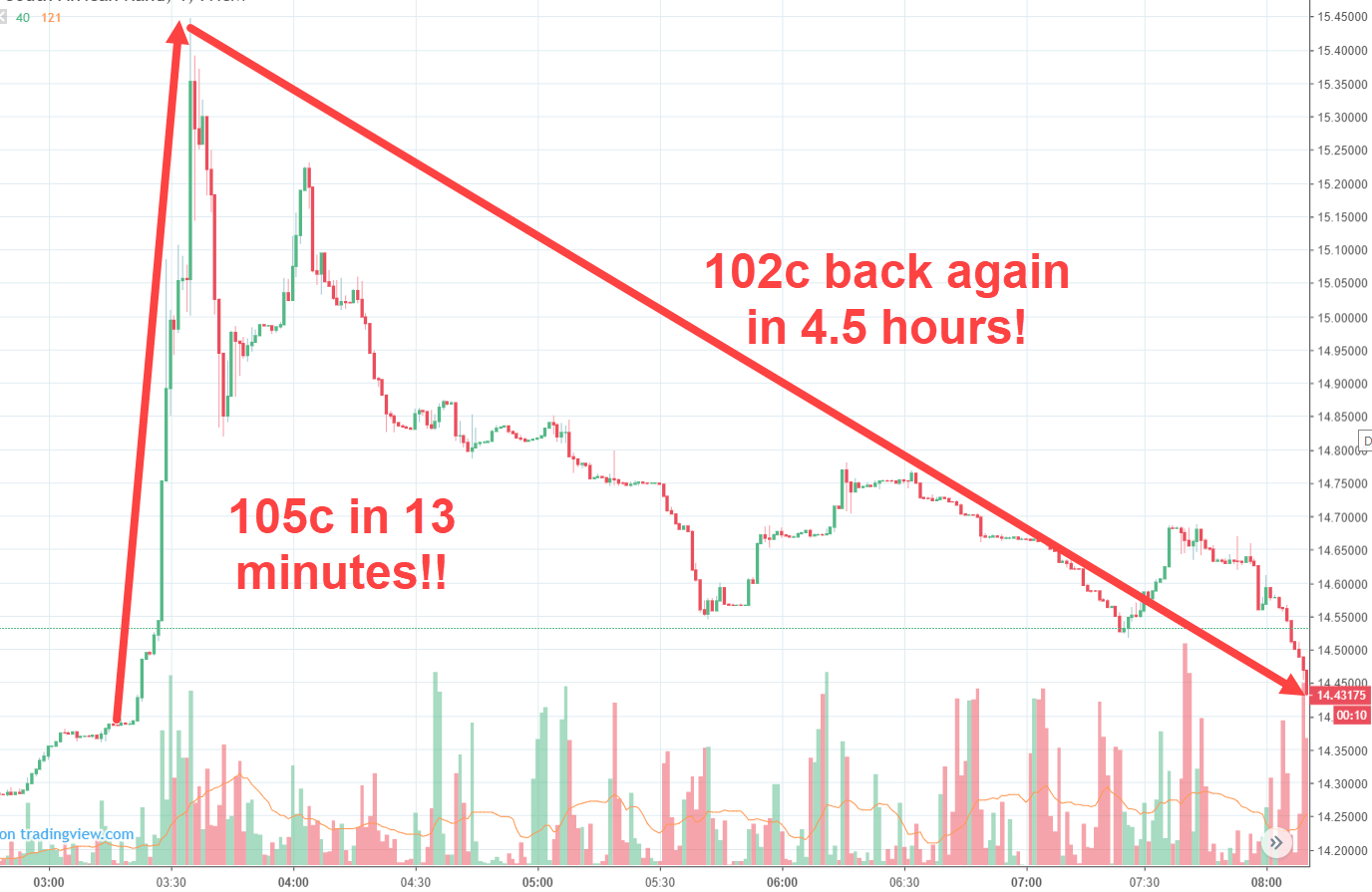 (just take that in for a second)

...and then - before many persons even knew - the market was back under R14.50, as the workday began around 8am.

By far, it was the most volatile of trading days in the Rand's recent history. It took us back to the days of #Nenegate and other events in 2015/2016 areas. A 130c range was set for the day - absolutely astonishing!

One thing was clear: the week was set up for MUCH more of the same volatility.

The blame for the collapse was put on Turkey's financial crisis. The Turkish Lira spiraled uncontrollably versus the Dollar in an even more extreme way than the Rand - it lost nearly 30% in value, taking it from 5 to the Dollar to 7 in just a few days, as Trump's trade decisions piled the pressure on the small economy.

Despite the dire situation, the Lira recovered by Wednesday to below 6 Lira to 1 USD. This was on the back of a $15bn bailout from Qatar, providing some stability. Also on Wednesday, it announced it was going to be putting tariffs on US products.

There were more than a handful of other events which headlined the week too:

The same volatile climate continued in the ZAR markets right through until the close on Friday, as the Rand dashed over R15/$ for the second time in the week. Once again, it broke lower from its high for the day of R15.02, to end the day closer to R14.80...

...some relief to end the week, but one of the most unnerving weeks in recent times meant that everyone ended the 5 days of volatility on edge. What next...? 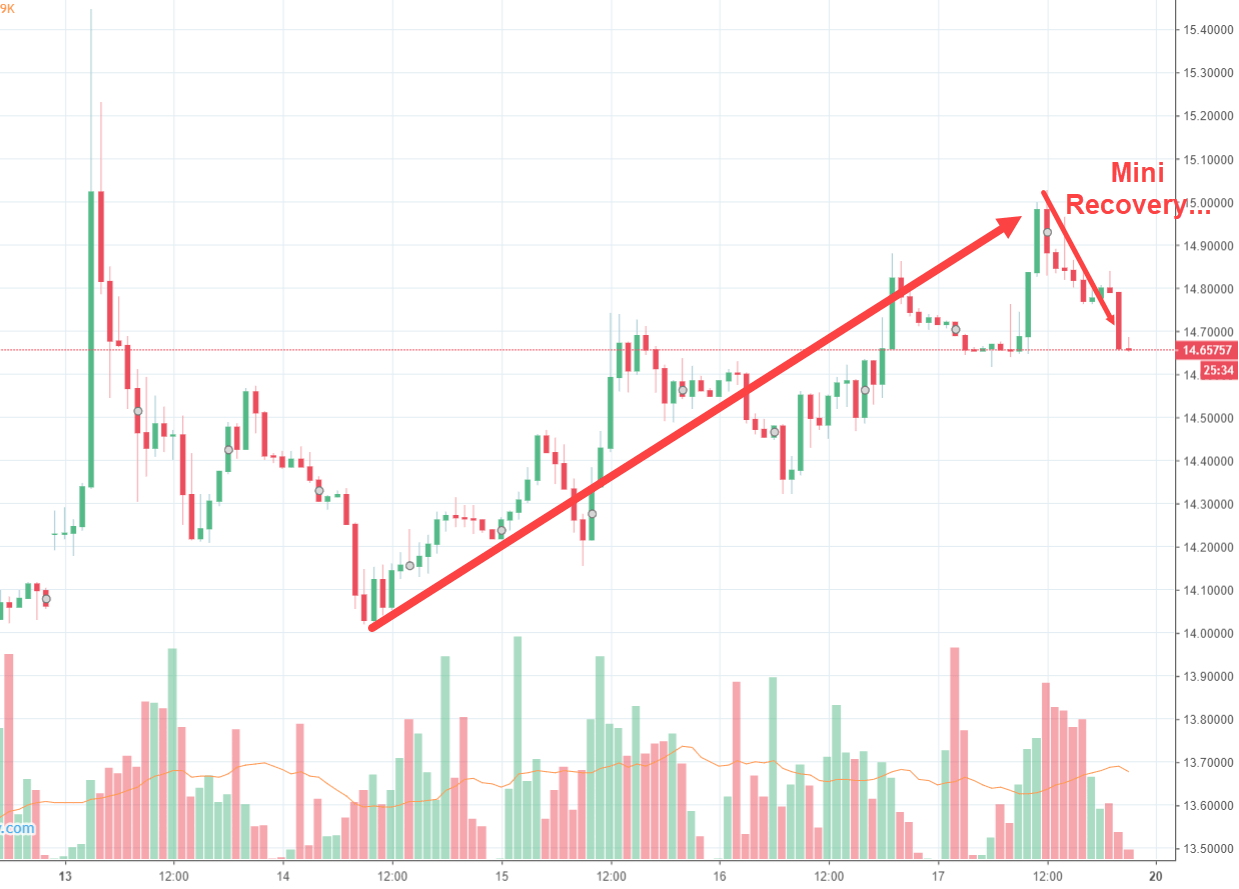 Well, after such a hectic week last week, what can we expect for the next few days and weeks ahead?

There are not any high impact fundamental events this week in terms of triggers, but don't expect it to be a calm week!

We have some key levels we are watching to confirm whether we have a larger degree top in place, or not - the next few days should tell...

Join us as we try and unravel the current market patterns for the next few days, weeks and months ahead.

Alex Paynter
« Previous Post Mayhem as Rand busts through R14/$! Next Post » Rand wins back the momentum and the week