This week was one of the turning points in SA's history, you would have to say, as some of the most anticipated national issues were addressed.

Ramaphosa had a busy week, with announcements on SARB grabbing headlines, as well as more news coming on Eskom's price hikes.

Along with the usual's of Brexit and Trump.

As for the Rand, well...all too soon we were back to January 2019 levels levels.

And most amazing of it all, the Elliott Wave Principle saw this massive spike coming, as the Rand soared to over R14.50 to the Dollar.

Let's dig deeper into the week, with Ramaphosa's announcements, global news and more!


Before we get into the week's activity, here was our forecast from Friday before all of this happened:

The predicted movement was up to R14.61 as a minimum target area, before the market would then top out and head lower. We were some way away, around R14.22, but that is what the waves were indicating...

...clearly, it was going to be quite a week.

The key moments were aplenty, but here are some of the biggest headlines:

I think the most crucial of those points was definitely the SARB nationalization.

This has been on the cards for some time, particularly after David Mabuza, SA's VP, announced that it was the ANC's intention to do this for some time. This originally comes out of the ANC's national elective conference in 2017, where they said they would work to nationalize the Reserve Bank and do away with its private shareholder structure.

This came to a head with the ANC bringing forward a motion to debate SARB's independence in March 2018, only to U-turn and can the idea...

...now it seems we are back to where we were then, and it is back on the priority list.

Ramaphosa words were that: "Obviously we have to go through processes to see how best that decision can be implemented. There is no hidden agenda. There is no 'manga-manga' business."

This caused panic stations among many SA investors, and rightfully so.

However, it is quite interesting to consider the subject, because nationalization itself is not the issue - it is how the bank is then managed, and what it is used to achieve.

Bank of England, for example, was privately owned until 1946, which was when it was nationalized. In 1998, it became an independent public organization, which meant it was independent in setting monetary policies. However, the actually ownership of the bank itself is entirely held by the UK government. SA is one of just 6 countries who still allows private shares in the central bank.

How exactly the nationalization of SARB works will have to be seen - but it is clear that the ownership is not the issue. It who is managing the bank and its monetary policy, and how they are doing it...

...which brings us to investors concerns of the ANC's ability to do this, following the economic position SA finds itself in, as a result of looting, corruption and more. This looks horribly like a moving forward of the NDR...read Communist agenda.

And therein we find the understandable reaction to the news from the USDZAR: 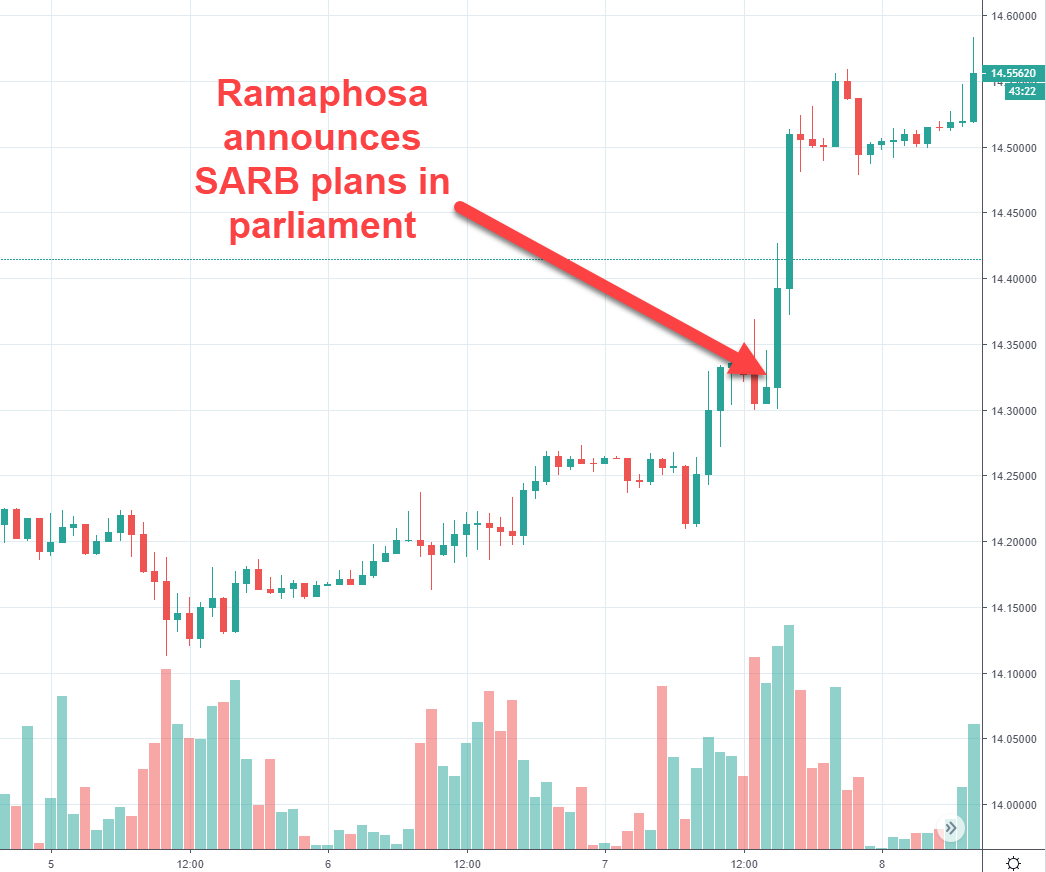 On Wednesday, we issued our next forecast which adjusted the minimum target level slightly to R14.56-14.92, before expecting some topping out:

And, as it so happened, on Friday morning after Thursday's announcement about SARB, we hit our target perfectly as the Rand moved to R14.58 to the Dollar.


There were some other headline grabbers besides SARB, such as:

The Rand steadied on Friday to close around R14.40...it had been quite a week, but not all bad, as the Rand only ended about 20-25c higher than where it opened.


So as we head into the second week of March, it doesn't seem like the volatility is like to lose steam, what with triggers like the UK Brexit Vote, Eskom load shedding worries, and of course, countdown to Moody's following the announcement to nationalize SARB.

Well, as we have sen this past week, the Elliott Wave Principle was ahead of the curve, suggesting a move higher before the shock news of the ANC's decision to nationalize of SARB.

While not a foolproof crystal ball, we have found over the years that the best hints for direction does not come from analyzing the news or data, but instead from analyzing the patterns of sentiment to give us (and our clients with Rand exposures) an edge as to where the market is likely to head in the short, medium and long term.

Current patterns indicate that we could be toppish around these areas, but with a chance of more short term upside.