...however, it does seem that the Rand is in a bit of a range bound area, solidly above R15 to the Dollar, testing its worst levels in 2019.

It was a week of all the usual action, with local and global politics taking center stage - combined with major economic events globally.

And so, let's get stuck into the full review to give you everything that happened...

Here are the most important points from the week:

To start with, Rand opened the week around R15.20 to the Dollar, having built a little momentum heading into the weekend.

However, that quickly changed over the next couple of days as we saw the market skyrocket to R15.49, the Rand's worst level since September 2018.

Despite the US Government's best attempts to stop concerns around an imminent recession, they were clearly very real, and this added to the Rand's volatility - despite signs that there may have been some progress in the US/China trade talks and a positive outlook for US growth.

It was also a look forward to Moody's decision keeping the headlines. Talk of another massive financial bailout for Eskom has put South Africa on thin ice with Moody’s. The country is said to be fighting a losing battle to keep its last remaining investment grade credit rating.

Thankfully though, the markets found a way to turn things around for the better in the second half of the week, as we saw the Rand slowly battle its way stronger.

There was some good news to keep the ZAR buoyant such as the Inflation figures coming out showing an impressive decrease to 4% instead of the expected 4.3-4.4%. Expectation now was for SARB to hold Interest Rates steady...

...and the Rand liked this pushing steadily lower. 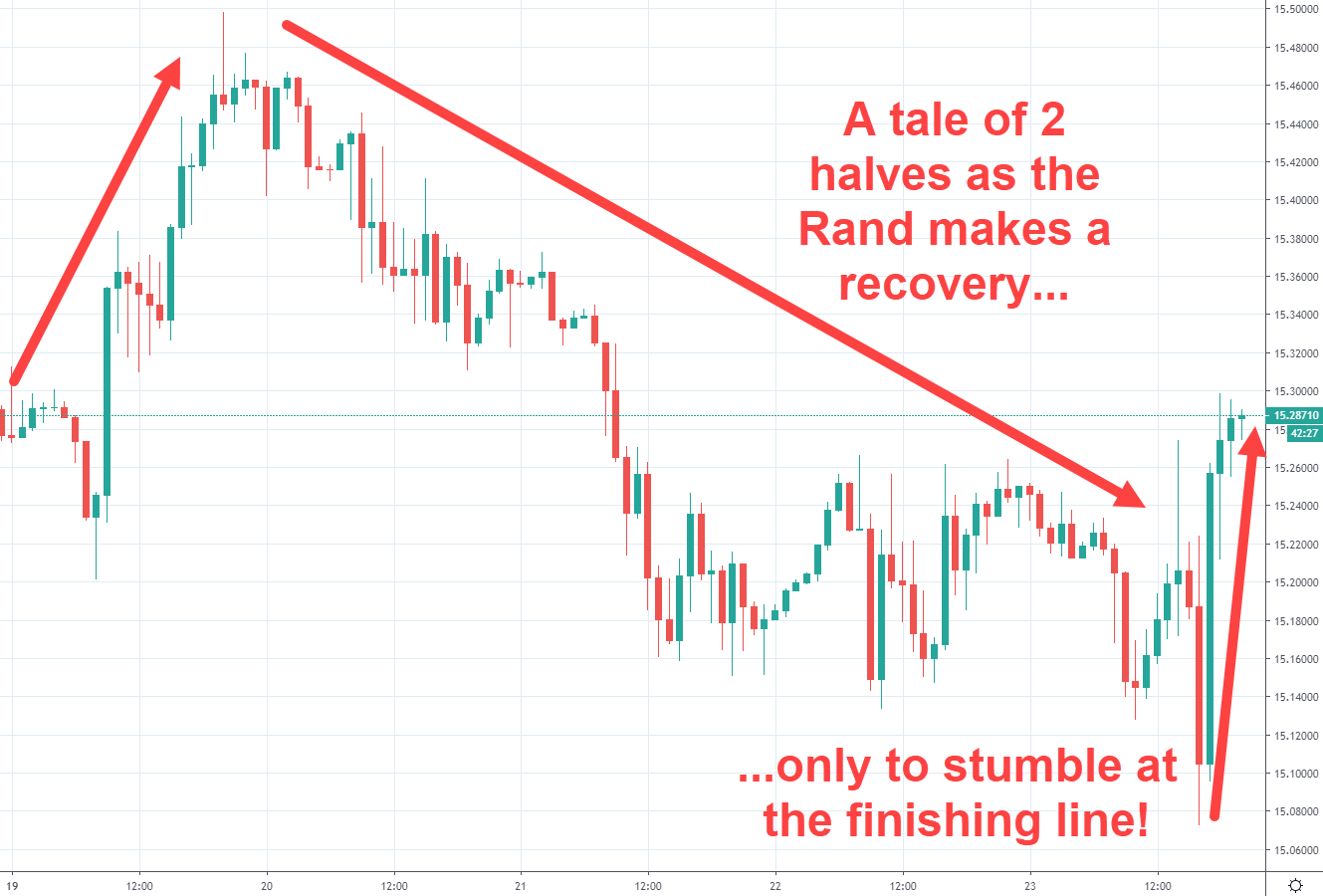 And as the week went on, the stronger the market went, slowly edging back into a far better position than where it began...

In other news, here were some of the major headlines:

On Friday, the attention turned to the Jackson Hole event at which Fed's Powell was going to be speaking.

However, before he could speak, news broke that China had announced another $75m of tariffs on the US - the next punch of the trade war boxing match...

Powell then came out and hinted that the US economy is in a "favourable place", but also added that there is "significant risks" in the coming months. Powell pointed out the last 3 weeks was quite "eventful" and highlighted the tariffs on China and the sharp downward move of long-term bond rates as negative developments. He stated that "based on our assessment of the implications of these developments, we will act as appropriate to sustain the expansion."

These comments gave a hint that the Fed will in all likelihood cut interest rates at the next FOMC meeting in Sept...

...which was not enough for Pres. Trump, who came out and blasted Powell, saying "As usual, the Fed did NOTHING! It is incredible that they can “speak” without knowing or asking what I am doing, which will be announced shortly." and "....My only question is, who is our bigger enemy, Jay Powell or Chairman Xi?"

...the good work undone, and we were back to over the opening rate to end the week!

So we come off the back of another very eventful week, and as we head into the last week of August, it's a case of "expect more of the same".

We have some potential triggers locally (SA PPI and Balance of Trade) and globally (US Durable Goods Orders and EU PPI).

But the markets will likely be more focused on the next move in the US/China Trade War chess game, as well as concerns locally with Eskom, Moody's, the NHI and the ANC's looking to prescribed assets to get it out of trouble.

A lot of things going on at the moment - and the question is:

"How do we make any sense out of it as far as the Rand goes?"

And the simple answer is, we do not try and decipher the news or fundamentals to give us direction. We simply let the market itself tell us what is happening, by analyzing the patterns of sentiment .

Applying the Elliott Wave Principle (the study of human behaviour in financial markets) to the market provides us with the best guess as to where the market is likely to be headed - much better than anything else we know.

As we mentioned last week, we have a couple of possible Elliott waves counts playing out at present, and the next few weeks will be critical to determine whether the preferred or alternate counts play out, as there are some critical inflection points to watch.