What a week for the Rand!

After a stagnant few weeks, hovering in the R13.50-R14.00 trading range, the Rand made its move in pulling to the best level of 2018, to conclude its best January in decades.

This just proved again that you cannot look to the fundamentals as a week of bad news had no effect on the local currency.

From failing SOEs, to bankrupt corporates, to notorious Rand weakness events in the near future...

...nothing could hold the ZAR back!

So let's get into the nitty gritty of how it all happened...


The big events were aplenty:


Where else to start but with the market movement itself...

The Rand produced its best January in decades, with the last January with a higher gain being in 1986! Back then, the Rand gained 9.72% against the Dollar, strengthening from R2.53 to R2.29 to the Dollar...

Quite incredible...and a reminder to us that volatility doesn't only exist now for the Rand, but back in 1986 as well.

The trigger in the week came from the US Fed meeting on Wednesday.

Fed's Powell announced that the Interest Rates would be put on hold, and that the Fed "...will patiently wait and let the data clarify" what will be happening through the remainder of the year. This supposedly was just the news the Rand wanted to hear, and it triggered a 30c pindrop, taking us back below R13.50/$! 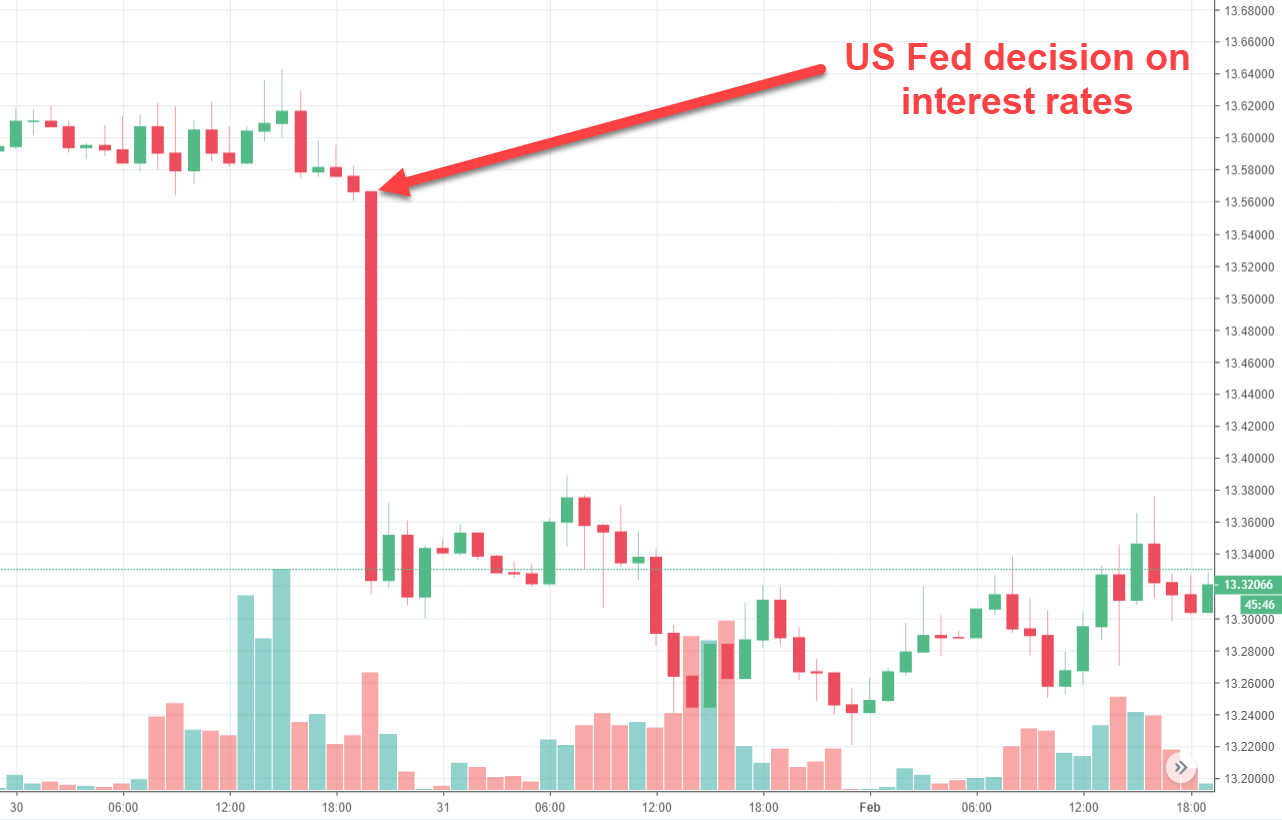 While this makes "sense", in a economist's point of view, this discounts all the other news that was about at the time.

Such as Eskom - the electricity giant on the brink of collapse. How was this "missed" by traders, investors and others?

The fact is, it wasn't. It was Dollar weakness, not Rand strength.

Which explains why we cannot look simply at small local news events for market direction.

Or any news events, for that matter. Such as the US government reopening, which should trigger a boom of business and Dollar strength - but nothing in the markets is as simple as that!

So, definitely a worthwhile reminder for us that news is only the trigger, not the direction-giver!


There was a whole lot more big events in the week:

Well, one thing is clear, it is going to be a big month in February!

This was despite the US Non-Farm Payrolls coming through a huge 304000 new jobs added, and this was while the government shutdown was happening...astonishing!

Regardless, the Rand was unfazed, and rolled onwards to close out a magnificent week and month!

So, that's January behind us already.

And with the Rand's best start of the years in decades, we are certainly in for another humdinger year.

This week sees a few events that could provide triggers, such as the State of the Nation and BoE interest rates (see the full details in our premium add-on fundamental events pop-up when you take a free trial).

And of course, there's developments on the US-China Trade War and the Wall to watch for.

But as you will have seen from last week, these are merely triggers - as the Rand powered ahead despite bad news.

Also, as you know by now, the market does not trend forever, but zigzags from one extreme of sentiment to the other. And at the moment sentiment certainly seems to siding with the local currency...

...but be careful when we get to an extreme of positivity, which will happen.

That is why we try and keep a tab on these patterns of sentiment, to give us and our clients with Rand exposures a clue as to where the market is likely to head in the short, medium and long term.

So, if you have some exposures, and need some roadmap for expected movements, please join us and give our free trial a shot.

We are here to help.