Well, we knew that the Rand's party against the Dollar had to come to an end sometime - and come to an end it did, as we saw the tables turn again this last week.

Despite all the uncertainty around the election results in the US, with actual and potential recounts - and mounting lawsuits by the Trump campaign - yet the Dollar shook this off as it recovered from last week's poor performance.

And locally there was a flurry of news too, as SA's anti-corruption drive picked up the pace!

And there was plenty more too - so let's get into the full review!

And here were the biggest talking points from the 5 days:

So, as the Rand opened the week around R15.50, things were looking pretty rosy...

...and in a couple of hours, it was looking rosier still!

The Dollar had already crumbled to its worst level in 3 months following media projections that Joe Biden was on track to win the US elections.

But on Monday, it actually recovered on the whole - yet the Rand strengthened vs the USD all the way to R15.20/$.

But getting back to the US election, despite Biden claiming victory, the battle was far from over...

Trump & his team continue to dispute the results - and have filed multiple lawsuits across key battleground states.

In the House of Representatives, the Democrats lost seats but still claimed the majority, while the Republicans secured 50 seats in the Senate, with the remaining two going to a special election in January...

...standby for that one, as it is going to be a major trigger!

As for the Rand, it started the week off well, but sadly it did not last. 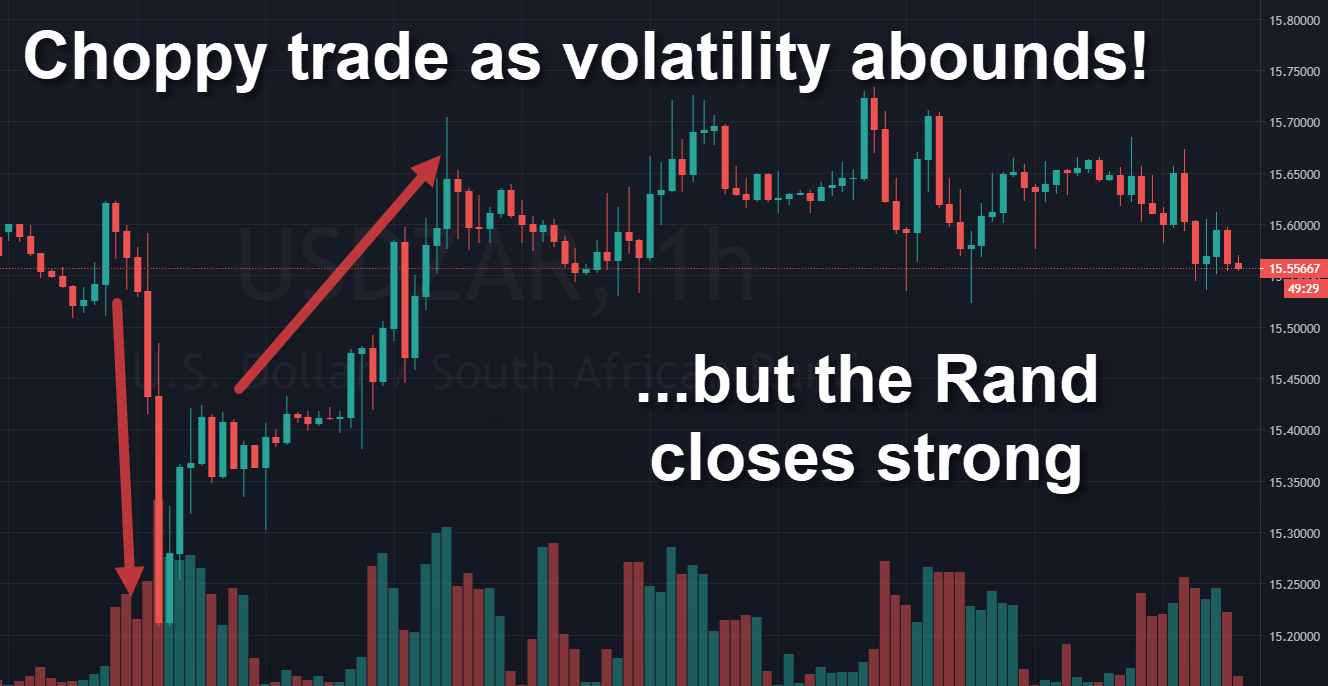 Back to the US, most news stations extended Joe Biden electoral college lead, with only Georgia and North Carolina remaining to be called..

Georgia is undergoing a recount, while it appears NC will fall into Trump's hands.

But as mentioned, the show is far from over, with mounting disputes and legal challenges to election results in Michigan, Pennsylvania, Arizona and possibly Nevada and Wisconsin.

So don't hold your breath.

Expect this to end up in the US Supreme Court before a US President is elected (remember George W Bush and Al Gore in 2000)...

An interesting few weeks lie ahead.

Lastly, we get back to the Rand for the week...

Thursday and Friday saw some consolidation, trading mostly in the R15.70-15.50 channel, waiting for a breakout.

We eventually closed the South African day at around R15.59 before strengthen back down to test R15.50 after hours.

And that was the wrap for the week!

This week ahead will give us a change (at least you would think so), but the same talking point will be the US election outcome as the challenges and legal disputes continue.

Nobody quite knows, just yet...so we will watch and see.

Regardless, here are some of the events ahead of us: