As things hotted up in the US, the Rand traded yet stronger against the Dollar much to importers' delight, tracking perfectly as per our Elliott Wave count...

And once again, it was a defying of negative local news, as the ZAR tested it's strongest levels this month.

The defying of expectations in so many markets has continued in the pandemic in a spectacular way. For example in the stock markets, which continue to rise ever higher despite everything seemingly on fire around them.

Do not be fooled.

Reality will hit, and don't be surprised if it is soon, particularly in the case of the stock markets.

This just proves the value of an emotion-free system to follow markets, as logic could never have predicted how the last few months would play out.

So let's take a look at this last week from the perspective of our Elliott Wave based forecasting system, when it comes to the Rand...

So before the week began, our forecasts were released on Friday for the USDZAR (shown below), as well as the EURZAR and GBPZAR.

The USDZAR outlook for the next few days was fairly clear cut - with the market at R17.38 at the open, our count showed us heading town to test at least R17.17 and below to the Dollar. (see below - click to enlarge)

And so now it was to watch whether the ZAR had the gas to make the extra yards down to that target area.

On the side of news, we had plenty of events:

Right...so to start the week, we had the Rand trading gently in the R17.30s, as we looked to see what the days ahead would hold.

And to start the week was some good news for Saffers with Ramaphosa's decision to finally lift restrictions to level 2! This meant wide-sweeping changes such as:

Sadly, it was proof that the lockdown had not worked - despite SA having one of the strictest globally, the cases have grown exponentially, and it has been to little effect.

Ramaphosa's action now is basically an admission of guilt that it hasn't, as the case count continues to climb, albeit not as fast. The only thing it has been effective with doing is crippling businesses and consumers alike - already in March, nearly 50% of active credit consumers in SA were behind on payments - and where that sits today can only be worse…

It is a dire situation with not too many positives to look at, and the key lies in the utilisation of funds loaned by IMF and other institutions to try kick-start everything again…

So, what about the Rand?

Well, despite this good news being announced, the market weakened to around the R17.50 level…counter to logic once again!

But quickly this weakening unravelled on Tuesday as we saw the Rand break stronger over Tuesday and Wednesday: 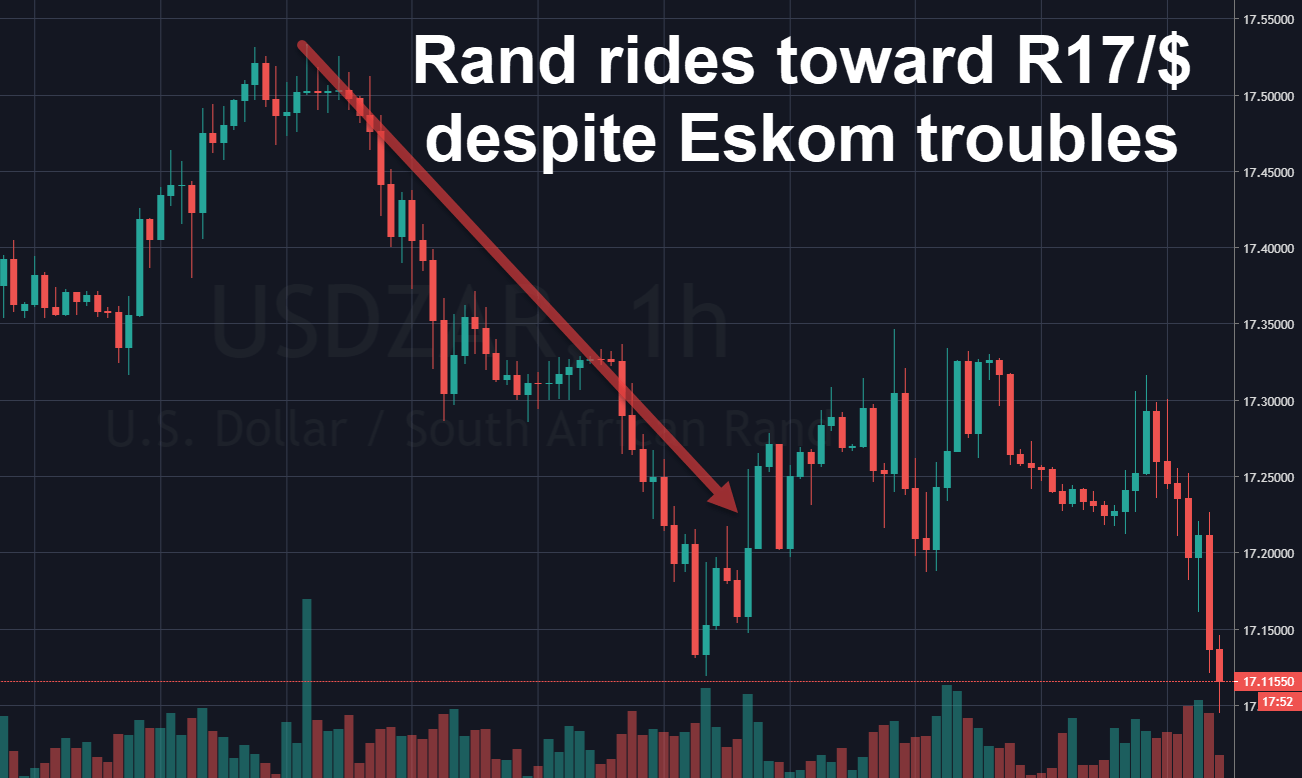 This once again left many stumped, as it was Eskom who took centre stage during this time with more load shedding. A mix of Stage 1 and Stage 2 load shedding meant that while business was back to work, it was a stop-start affair…

...for how much longer will this economic-drag exist?

Well, this is not a simple question to answer - with aged infrastructure really taking strain, there are no quick fixes.

Regardless, the Rand had moved exactly as per our forecasts again, breaking as strong as R17.11 to the Dollar, right in our target area from Friday.

And as for the Rand in the midst of all of this, it rebounded on Wednesday after breaking into our target area, but our forecast on Wednesday evening confirmed that we should see another break into the same R17.17 and below area...

...and so it did on Thursday as the market tested up around R17.35 - before strengthening back down to below R17.10 on Friday afternoon!

And that was the wrap, as the rand enjoyed another fantastic week!

As we look to the week ahead, we have several events, but nothing too big coming up over the next few days:

Over in the US, stimulus ideas will likely be tabled again sometime soon, as well as the Republican convention going ahead as the real countdown to the election begins...

But don't expect things to be any less volatile, as the markets continue to defy the odds.

The market has entered our targets so we will be watching the price levels to confirm our preferred outlook for a bottoming out soon, based on our Elliott Wave based forecasting system.

Alex Paynter
« Previous Post Rand pulls back as the US stimulus stalls Next Post » Dollar collapse is Rand's gain...as Elliott calls it again