Once again, the Rand has defied expectations...

What could cause the local unit to strengthen to 27 month record levels against the Dollar?

The economists scrambled for ideas, explanations and ideas as bemused onlookers couldn't see the reasoning, once again evidencing the irrationality of markets - and why we cannot look to fundamentals or news but rather market patterns.

The Rand is now touching levels more than R5.50 stronger to the Dollar since last year April - and it's best levels in well over 2 years.

These numbers are nothing short of staggering!

It is time for us to take stock and see if we could have seen this coming...

...and what is coming next?

First things first, our outlook on Friday the 21st set the tone for the week, giving us where the USDZAR market was expected to move over the coming days:

It showed us trading at R13.95, with the potential to head down lower into our target area before bottoming out. The target area sat at R14.00-13.60, so while we were expected to trade lower, the trend reversal was imminent...

And we sure had an interesting week of events to help trigger market movement:

And to start with where we found ourselves on Monday, the Rand traded around R13.94 at the open, as investors seemed to not have a care in the world as to SA's long term issues.

The ZAR had been boosted by news from S&P Global and Fitch, who both affirmed SA's current rating, maintaining the position of 3 points below investment grade.

While this is a sorry state of affairs, investors don't seem to be paying much attention to it, and rather some of the agencies comments, such as Fitch saying SA's state finances have "improved substantially", despite continued "substantial risks to debt stabilisation".

Fitch had expected SA's Gov budget deficit to hit 15.5% last year, but instead this was almost a third lower at 11.1%. Along with that, thanks largely to commodity prices, SA's external finances have weathered the pandemic well.

Small encouragements, but really, it is just proof that investors will take note of the news that they want to hear - based on their sentiment, in this case just shutting out the negative.

Such as the looming lockdown...

With surging of cases and deaths locally, it seems from government comments that another lockdown for Wave 3 is inevitable (despite lockdowns globally having shown no benefit whatever) - the result for the economy will be disaster.

So surely the Rand tanks as Ramaphosa is expected to address the Nation any moment to decide on what steps he will take on the spike in cases?

Nope. Just the opposite, as the Rand pushed down to R13.67, a record level in the last 27 months! 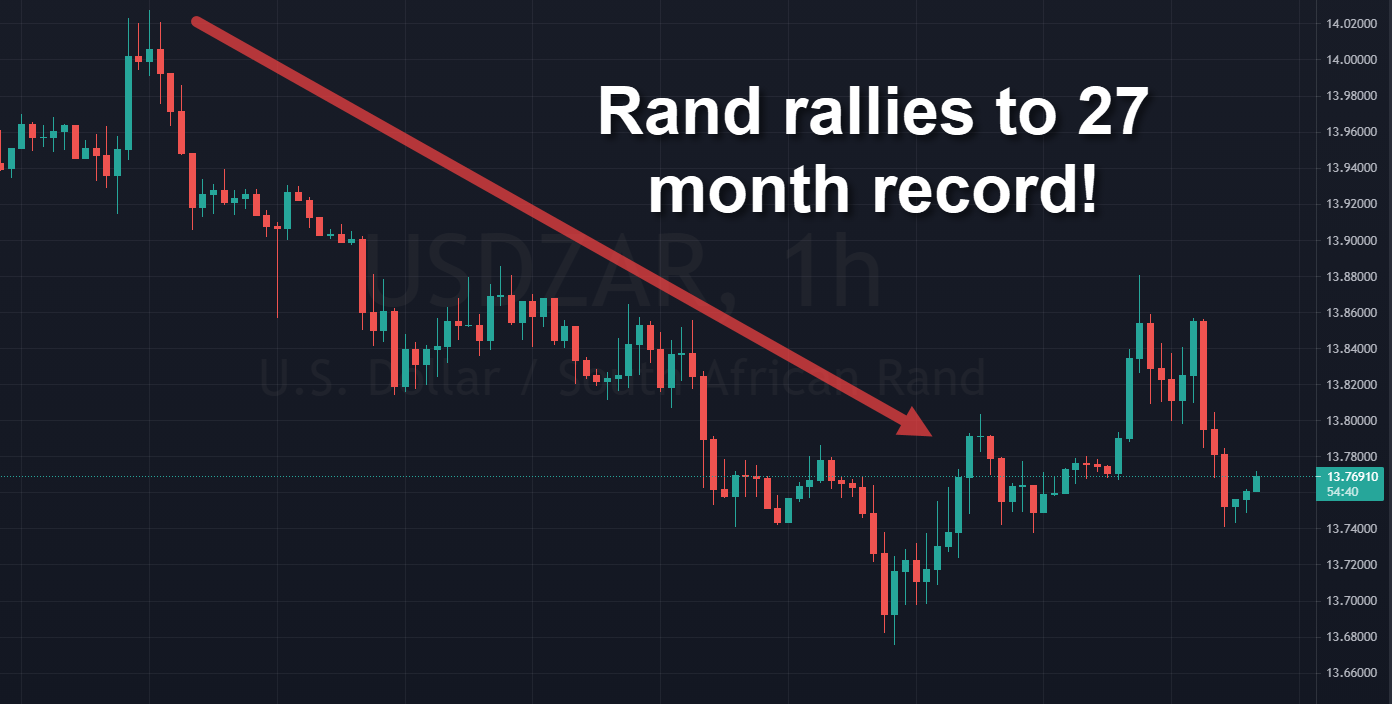 Back to the local unit, we saw the ZAR move through choppy waters to the end of the week, eventually closing a touch below R13.80/$.

What an amazing run, as the Rand defied all expectations once again...

...BUT what do the weeks ahead now hold?

As we look ahead to the first week of June, we realize we are nearly halfway through the year! Time flies...

In terms of events, there were a number to watch out for:

So some 'biggies' in terms of potential triggers - not that the market needs economic releases for triggers, with all that is going on in social, political and financial arenas globally.

Based on our analysis, it does look like the local unit may be starting to run out of steam, and we will be watching some key levels over the next few days to confirm what our Elliott Wave based forecasting system is telling us is likely to play out for the for the days and weeks - and possibly months - ahead.