The Rand continues to blow past expectations, moving ever stronger against the Dollar.

The turnaround neared R6 stronger from where we were in April last year, when there was that blowout to above R19/$.

While the Rand has benefitted from a commodity price boom, such strengthening can hardly be expected given an economy in disarray, spiralling debt and unemployment and more?

Such is the irrationality of markets.

Beware, this is a pattern that repeats over and over...

...and the result is always the same.

When a market is nearing an extreme, and you don't want to let your emotions run away with you.

Let's start with a full review of this last week...

Before we get into the week, here were some of the biggest headlines from the 5 days:

So, to start the week we had the Rand trading around R13.77, already at record levels for more than 2 years.

The Rand was certainly outperformed all expectations in the last few months - and disbelief was starting to set in that it had any more gas left in the tank.

The fact is that the odds were actually stacked against the local unit, and yet it was turning the tables.

The big event for the week was unemployment numbers - which never means good news...

And as expected, they came in poorly with the rate increasing to 32.6%, a record level of unemployment since 2008 - and these are just the official figures, with more on the ground views being that the country is well over 50% in reality.

But post-pandemic, this is a common problem...

...with the UN now estimating more than 100 million pushed into poverty as a result of the pandemic - really because of government lockdowns.

This shows the madness of shutting down economies...it is totally unjustified (does not work), and has done untold damage!

And yet, on we go with governments threatening of shutting down again, including SA's Ramaphosa...

And then you have Eskom announcing stage 2 load shedding.

Yet by mid-way through the week, the Rand was still pushing onwards, testing R13.50/$, with the market moving further and further to record levels not seen for well over 2 years.

One thing that was running in SA's favour was commodity prices: As world economies re-emerge from the pandemic, so has their demand for commodities, of which SA is a major exporter. The current demand has pushed prices higher.

And too, a stronger Rand should mean cheaper fuel - something that South Africans have been desperate for. But this hasn't been so simple, as Oil's push ever higher to now testing around $70/barrel meant that most of the gains of the local unit have been negated.

So now it is a case of who is going to break first - Rand or Oil that has a correction?

And then all of a sudden, it was Friday.

And Friday meant it was time for the jobs report from the US - one of the major triggers...

While these are enormous numbers, and they brought unemployment down to 5.8%, economists remain wary to see whether falling short of expectations is to be anticipated because of how difficult it is to predict an economic recovery of this nature - or if the numbers must just be taken on face value as fast hiring taking place.

Regardless, the markets moved...and how!

Thursday had seen the Rand up testing closer to R13.70...

...but that ended VERY quickly, as the USD went into freefall on this news: 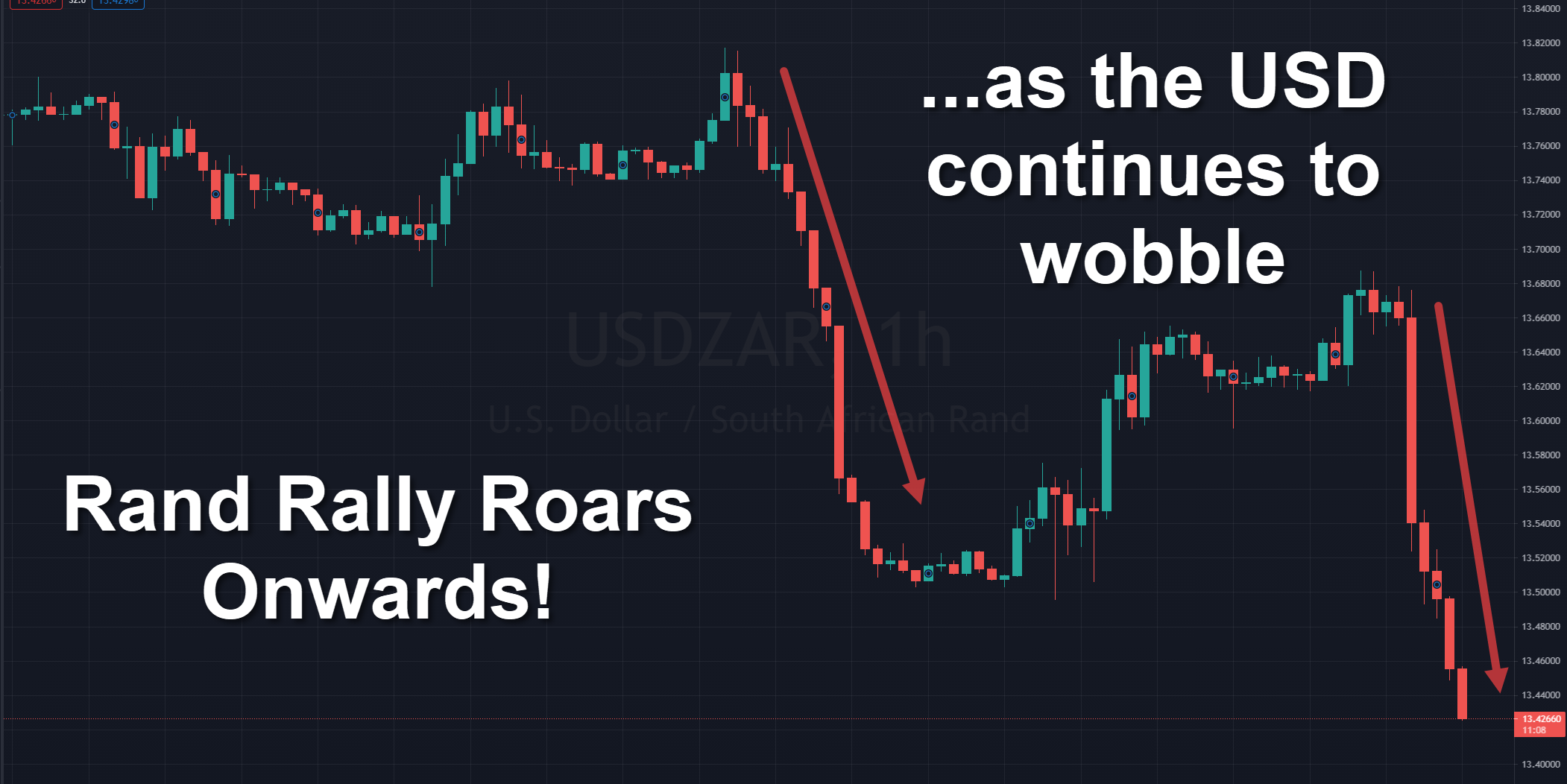 The Rand was now edging toward levels not seen since 2018, trading around R13.45 at the SA close!

After hours the Rand kept strengthening, continuing the amazing run...

What a past 18 months it has been - we will just leave you with this picture (click to enlarge):

As we look ahead to the first week of June, we realize we are nearly halfway through the year! Time flies...

As we roll onwards towards the halfway mark for the year, there are some events for us to watch in the second week of June:

So a fair number of triggers, but plenty others abound with tensions globally whether social, political, financial or economic.

The local unit had another incredible week last week, but we do not expect this one-way traffic to last much longer, based on our Elliott Wave based forecasting system. We will be looking closely at what the patterns are telling us over the next week to give us some hints the days and weeks - and possibly months - ahead.
Please take our Rand forecasting service for a test-drive!