So onward the Rand train runs!

The Dollar's decline from last week has continued and the Rand has really taken advantage of it, strengthening to pre-pandemic levels.

The irrationality of markets is really on full display, as the US is really starting to show signs of coming out the other side of the crisis, while locally the situation continues in full flow.

Yet it is the Dollar weakening and the Rand strengthening...

But just another lesson for not looking to logic in the markets, which will have you floundering time and time again.

But if we think that currency markets are volatile, take a look at Cryptocurrency - as Bitcoin hit USD 65000, and Ethereum USD 2500… incredible times we live in.

Before we get into the week, here were the biggest headlines from the 5 days:

As for the Rand, we saw the market open around R14.57, having been fairly range-bound against the Dollar the week before.

We have been awaiting a breakout, some market reaction to trigger the underlying sentiment...

...and this week had the potential to do just that.

The major talking point was the Retail Sales figures locally, and they came in at 2.3%, well above the -1.8% consensus. This was the first positive reading in 10 months as we hopefully leave strict lockdown measures, which subdued economic growth.

Then the US one-upped that, with their figures:

As consumers spent their stimulus checks and bars and restaurants began to reopen from restrictions, this boom also broke away above the expected 6.1%.

This really prompted belief that things were getting back to normal...

...when really it is just governments removing restrictions (which only caused harm in the first place) and allowing business to work again, not that the so-called 'pandemic' is any different to what it was 3 months ago.

But enough on that, because in the markets we saw the reaction to this news, as stocks jumped higher. The DOW soared another 300 points, also on the back of reports that showed first-time filings for unemployment insurance dropped to the lowest level since March 2020. The Labor Department reported 576,000 new jobless claims for the week ended April 10. Economists polled by Dow Jones expected a total of 710,000.

Perhaps one would think that investors are justified in doing this, based on the good news...

...but the reality is that investors are bordering on euphoria on stocks going higher.

This bubble is going to pop, and we are here to warn you as to that. Because it is going to affect everyone - from United States, to South Africa, to Australia and everywhere in between.

The US Economy flows down to every economy, and the current trends cannot continue.

During a time when the Deli was closed in 2020, the stock rose almost 3 times its value. For no reason. None at all.

These kinds of events are KEY to noting that we ARE in a bubble...who can deny it?

So tread carefully, invest wisely, don't put all your eggs in one basket, and don't follow the herd that is rushing toward a precipice…

...when everyone believes the market CANNOT go down, that is when it will turn, as there is no one left to push the market higher.

To get back to the Rand, we saw a slight weakening to R14.68 on Tuesday, but the rest of the week was a different story!

The market turned on its head, moving more than 50c stronger against the Dollar by Thursday where we saw it hit the best level in 15 months, at R14.15/$: 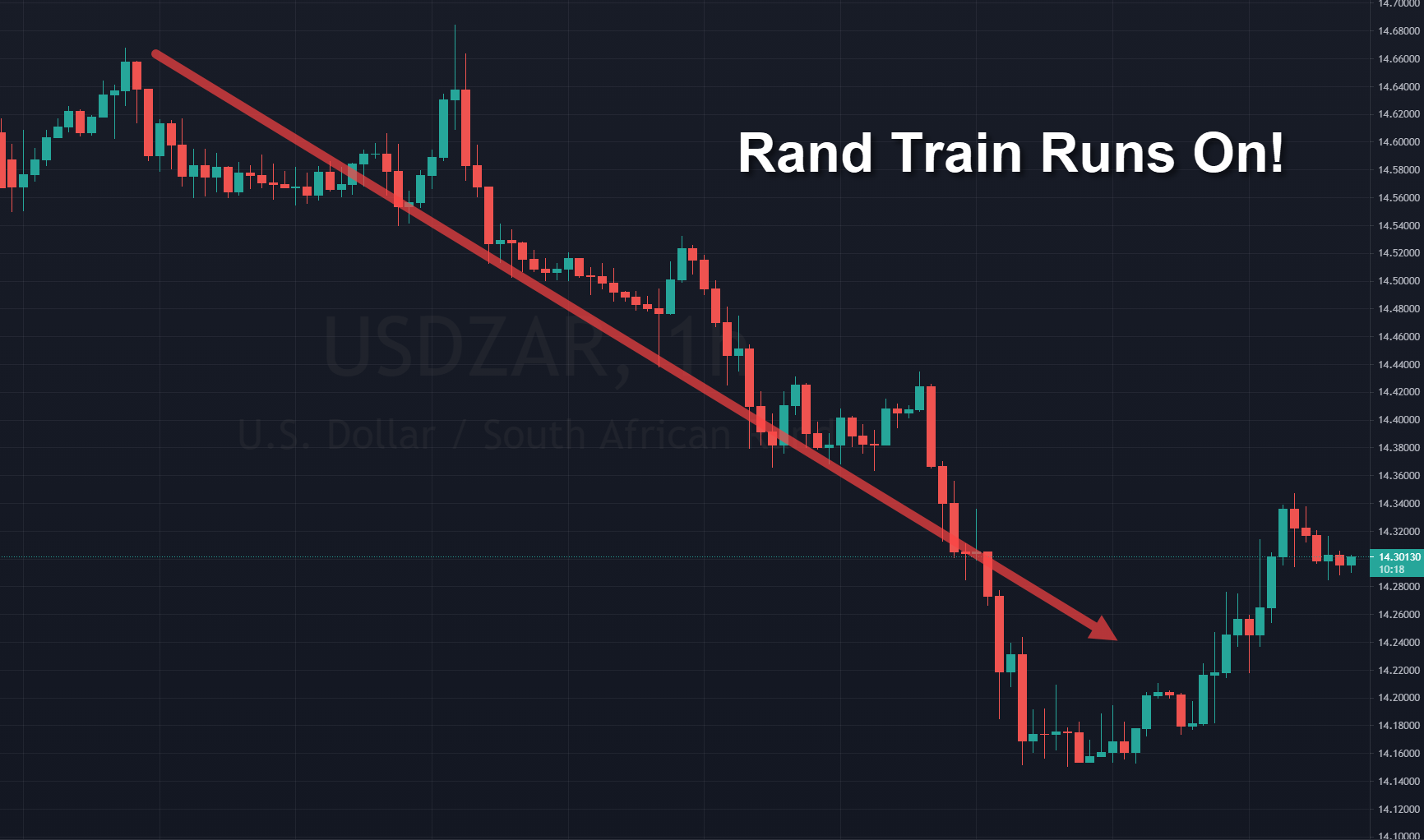 Who would have thought this would be the case, when 1 year ago to the day, we were trading just shy of R19?

Such is the ebb and flow of the markets...

And getting back to the Rand, Friday saw the ZAR slip a little from its healthy position to close just over R14.30.

However, on the whole, still a successful week for the Rand!

And that was the wrap...

And as we look forward into the second half of April, this week does not have a lot of significant events apart from ECB Rate Decisions:

But there is a lot going on, whether financially, economically, socially or politically - so don't expect a week without eventful triggers.

The Rand has enjoyed good fortunes the past few weeks, but as we mentioned last week, it seems it may be starting to run out of steam.

Based on our analysis, we will be watching some key levels (as depicted in our forecasts), and the Rand's activities this next week or so will likely give some direction for the weeks - and possibly months - ahead.