Well, well...against all odds you might say, we saw another week of risk-on sentiment and Rand positive movement.

And boy, it could not have come a moment sooner for importers and consumers alike (and for those exporters who had taken out forward cover prematurely).

But how could we have seen this coming?

There was so much negative, yet the Rand was 'focusing' on the positive?

Why does the market always seem to defy our expectations - again and again?

Read on...let's take a look at the whole week and explain it for you.

So firstly, here are some of biggest headlines from the 5 days:

So, let's start at the very beginning:

Monday's open saw the Rand trade at around R17.60, after a strong previous week.

Many, still stuck in Rand-negative sentiment because of the seemingly endless devaluing over the previous few months, were expecting this week to be the one where the Rand turns around and sails back towards R19/$.

One would expect that all the Rand needed is one negative local event, and we would see everything fall apart again.

I don't know, maybe something like SAA going bust and being bailed out again?

Right on cue, there it was.

Another R4.6 billion which taxpayers would have to cough up for the airline to keep on functioning.

What sense is there in doing this?

The answer is that there isn't any...

...but to get back to the Rand - you would think this negative trigger would send is spiralling weaker, especially combined with some Monday blues?

In fact, the opposite, as we saw it strengthen over the coming days to break clean through R17/$ and R19/€.

So, instead the headlines read to the effect of "Lockdown relief and manufacturing improvements boost Rand"...

...instead of "SAA Bailout creates investor fear as Rand tanks".

So obvious...and yet so subtle is the after-the-fact analysis, that most persons just lap it up. You, as reading this newsletter, will hopefully see things differently after watching this video on the "Fear & Greed Meter".

It never gets old, as you see the same patterns playing out again and again.

Just remember, when there is no one left negative, and all are positive, we can expect the market to turn again.

Those who are still negative now, will ONLY finally turn positive when the market is in its last wave stronger and is about to turn...

...and they are left making another wrong, emotional decision.

As an alternative to that, what we do is release to our clients emotion-free, objective forecasts on the Rand vs Dollar, Rand vs Euro and Rand vs Pound twice a week.

Below is the same forecast we showed last week, which shows just how smoothly the Rand has moved in line with the Elliott Wave Patterns:

You can click to enlarge the forecast, and what you will see is how we showed sentiment at an extreme with the Rand due to top out shortly. Over the coming weeks, that was exactly what we have all seen...

And while no system is perfect, this just shows the power of the Elliott Wave Principle to be able to predict changes in sentiment before they even happen - even when rational logic says otherwise!

As the week ran on, we saw the USDZAR keep strengthening toward new levels of strength not seen since the series of March blowouts... 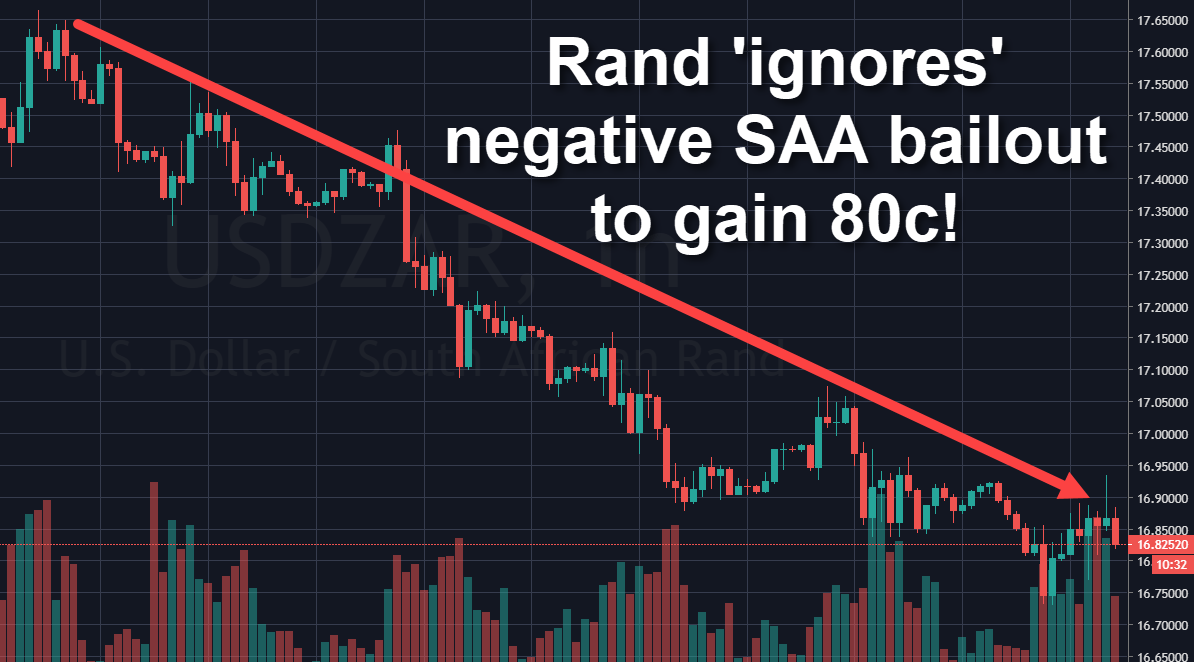 And lastly, some economic news on Thursday, as we saw the ECB increasing their stimulus program by EUR600 billion to EUR1.35 trillion. Their emergency bond purchasing program has further been extended to June 2021...

...this would suggest that the Covid-19 effects are clearly far from done.

And then you had the US on Friday with their Non-Farm Payrolls & Unemployment Rate, which was expected to make for horrific reading.

But it didn't...leaving everyone puzzled (and many doubtful)

US non-farm payrolls printed at 2.5 million jobs created instead of the forecasted 8 million job losses. Also, the unemployment rate cam in at 13,7% versus an expected 19%.

Never before have US figures really come into question in terms of economic statistics, but this is the most confusing release of data we have ever come across. If the country was in lockdown and you see the number of jobless claims still coming in, how can such a number be possible?

Some clarity will come in, no doubt...

As we look to the week ahead, there a number of events over the coming days, with some of the major ones being:

And then we also have the ongoing civil unrest in the US, US-China tensions and Covid-19 lockdown measures gradually being lifted.

And where to for the Rand?

Well, once again, we won't be looking at the above events to give us direction.

We will instead be watching what the price action in the markets is telling us (based on the evolving patterns), to give us an idea of where we are headed.

And based on this, the next next few days and weeks should be very interesting - and will likely take many unprepared persons by surprise...