The quiet trading of the Rand stronger against the Dollar made for an interesting week, as investors and traders slowly unwound their emotions from the crazy last few weeks.

July has been unusually quiet for the Rand...which makes us wonder how much longer it is going to last?

Dollar weakness made for the Rand ending the week on the front foot - a welcome surprise.

But as Covid-19 continues to rage on, when is the penny going to drop for many crippled economies?

It is an interesting question, with everyone in the same boat - suddenly the playing field between emerging markets and the big boys has been narrowed.

However, the depth of each country's back pocket is going to be tested, and that may be the deciding factor.

Anyway, let's get into the full Rand Review...

Firstly, here were the main talking points from the 5 days:

To open the week, the Rand got off to a flying start against the Dollar, without any sign of Monday blues.

The market headed down sub R17/$, to test as strong as R16.88 before we saw it retracing over the coming days.

This week didn't have a pile of economic news, but some of the bigger announcements came from SARB:

Interesting times for the Reserve Bank as they try to play the game of tightrope walking like everybody else.

It really is a question of how much this could have been avoided for so many countries, as economies like Japan's and South Korea's have continued, having not implemented intense lockdown restrictions or having shutdown their economies.

Ramaphosa admitted that the lockdown didn't do much more than delay the peak of cases, and the US is seeing the same thing as they try to reopen...

The US count has continued to surge to over 3 million with now closing 150,000 persons dead. But would it have been the same if the US had not shut down at all? At this stage, it is tough to tell, but case studies will show this in the future...

As for the Rand, its solid week continued into the backend of the 5 days, with Friday's trade seeing the market SA close below R16.80... 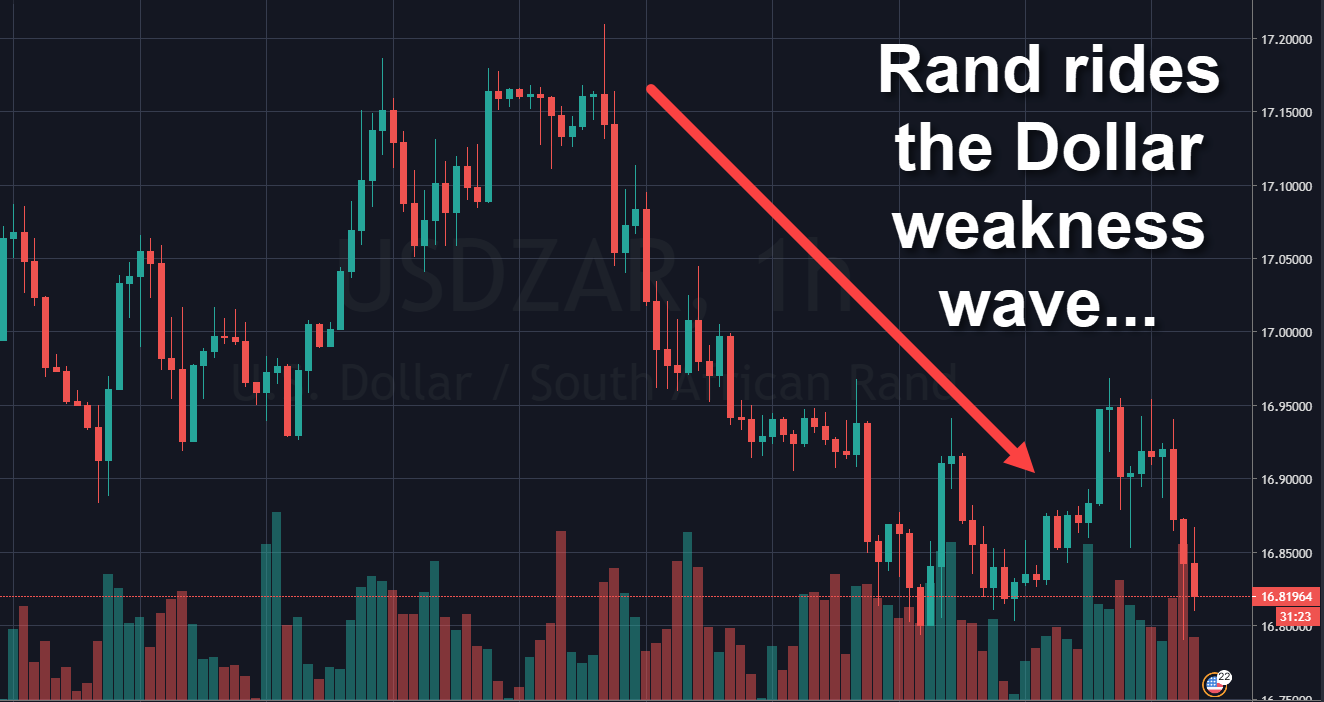 It had been a really intriguing week, as the Rand fared better than most of its counterpart emerging markets, proving the markets movements to be more than just Dollar weakness.

Speaking of which, the unwinding of the Dollar's highs from March has been quite spectacular when you look at it on a chart...

The ever changing landscape continues...and this time, to the Rand's advantage.

As we look to the week ahead, we have a number of fairly important economic events coming up over the next few days:

The Rand doesn't normally keep so quiet and placid for long, and these will certainly provide some triggers...

And that is not even including the emotions already running high with so many ongoing local and global issues, Covid, US/China tension and trade wars, middle-east tensions and more.

All of these events eventually come back to the fear & greed factor.

The balance of all these emotions of all the persons involved in the Rand market will dictate where the market is headed...

...and those same emotions are your worst enemy.

When the market is trading with high volatility, it is extremely difficult to make rational and educated decisions that often mean doing the opposite of what your emotions are telling you.

And that is why we rely on our Elliott Wave based forecasting system to give us a scientific-based objective view of where the market is likely headed in time and price.

Based on the current analysis and forecast, we expect a few surprises (for the unprepared) the next week or two and we will be closely watching some key levels to confirm or invalidate our preferred outlook.

Alex Paynter
« Previous Post Rand rallies to R17/$...but has it run out of steam? Next Post » Uncertain days for Rand as US/China tensions rise