Up and down, back and forth, to and fro for the Rand, as we saw the market volatile but mostly trading sideways.

This despite all of the news, supplementary budgets and more, it turned out to be a bit of a 'damp squibb' for the news stations with no real breakout in the markets.

It was an interesting week none the less, as we saw Tito Mboweni try and balance a weak economy while walking a tightrope over the top of a sovereign debt crisis.

There was plenty more to review as well, so let's get into the unpacking of the week

In the topsy-turvey week, here were the biggest talking points:

Well, we will try keep this not as all doom and gloom - but it was a week with few bright lights for the Rand.

Despite ending the week stronger than it began, it was a difficult few days as Mboweni put a real damper on hopes of a 'better-than-we-feared' situation.

In true, brutally honest Tito Mboweni style, he painted the picture of Greece, Zimbabwe and post-war Germany should urgent action not be taken. The debt crisis is escalating fast, with now 21c of every R1 the government receives going towards servicing debt.

It is certainly the crunch situation now for him and the ANC. And likely with the IMF or other institutions breathing down their necks to keep them honest too, which may not be a bad thing at all.

This speech followed the unemployment rate announcement of 30.1% in Q1 of 2020. It is worth noting that this came only 2 weeks after the lockdown began on 15 March 2020. Q2's figures are going to be even more uncomfortable than these ones, which are already the worst since 2002.

A comparison with the US who gives monthly unemployment numbers gives an idea of the seriousness of what SA is faced with when Q2 figures come out:

But despite all of these events and Tito's announcement, the Rand seemed to turn a blind eye to all of it. Much to the economists confusion.

It is a funny old game watching the markets, but you see the same things happening time and time again, as events which were seen as so critical have no effect on the short term value of the Rand. 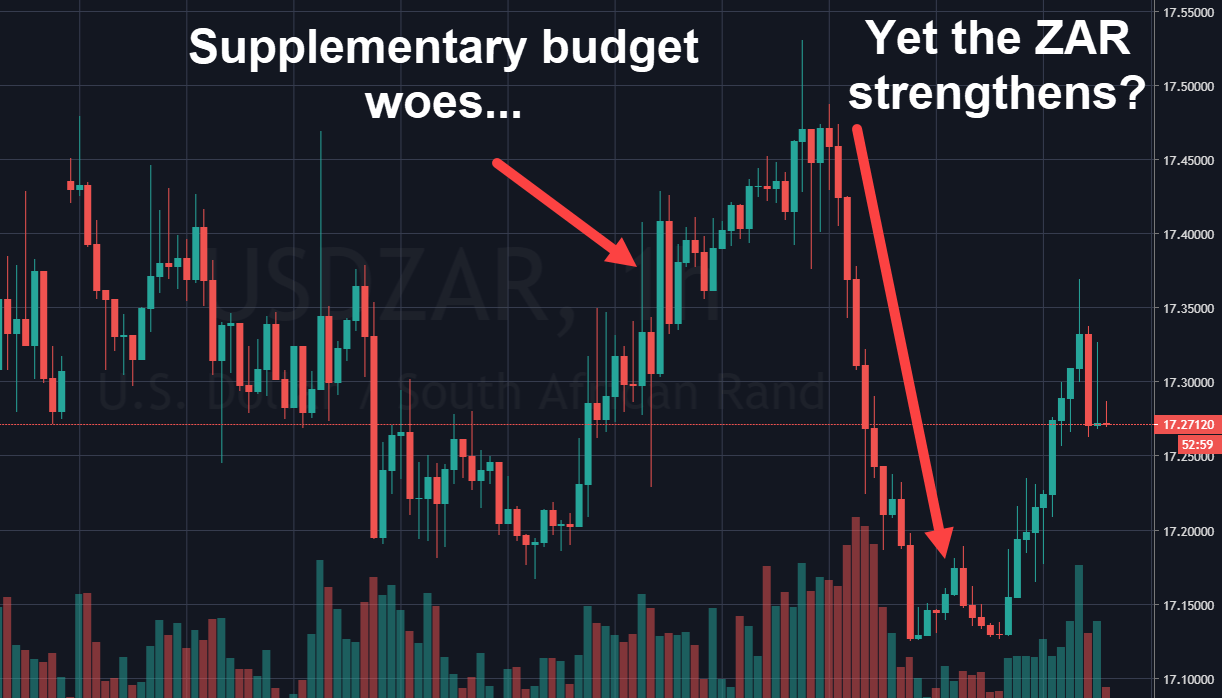 As for the Rand, we saw it range trading for the back half of the week, although strengthening significantly on Thursday after Tito's budget.

Friday saw some of those gains given back again, but the Rand still ending on mostly level ground at R17.30 to the Dollar at the close of South African trade.

This was despite the Dollar strengthening against most other currencies, pulling ground back in the latter half of the week against the Euro.

As we look to the week ahead, there are a number of major events for us to which in the economic world, particularly in the US:

As emotions run high into this week over the surging of cases across the US, it is a time where persons will turn to being fearful once again, after a period of 'baseless calm', so to speak.

And it is when persons will try use logic in the markets.

Logic unfortunately doesn't cut it when it comes to financial markets because it is affected by emotions… and we all know that emotions are your worst enemy.

So we will be watching these events for triggers, but where does that leave the Rand?

We are expecting more volatility here too, and will be watching some key levels over the next week or so to confirm or invalidate our preferred Elliott Wave count.

We will be sticking closely to that count and our Elliott Wave based forecasting system, as we look toward a breakout from the Rand's holding pattern.

Alex Paynter
« Previous Post Rand slowly trades higher as we await a breakout... Next Post » Rand rallies to R17/$...but has it run out of steam?