Another week passes by, and the tables turn again...

...somehow the Rand has turned it around from being on the ropes, to rallying back below R15/$ again.

It was a welcome change, with a week of good news.

However, the counts of where the market was expected to head were what really mattered, and this meant we could not take our eyes off of the expected trends over the next few weeks...

...even if there was good or bad news!

Let's review how it went...

There were some key moments which took the headlines this week.

Here are a few of them:

So, where did the week all start?

Actually, in very calm and cool fashion - the market opened around R15.20, and unlike previous weeks, the following few days were some of the most low volume and relaxed days we have seen in months...

...it was nice to catch one's breath again!

Along with that calm came some Rand strengthening, as per our expectations of retracing lower.

This was despite the news on Friday from the US:

So, fighting against the tide so to speak, the Rand made a good start...!

And while the tide of potential bad news seemed to kept flowing against the local currency, with the Chinese Yuan hitting 2 week lows following Trump's statements, and China saying they are prepared to retaliate if need be...the local currency just kept going!

And then on Tuesday, some good news arrived, bolstering the market further:

Mood's released a statement saying that they had upgraded the outlook on South African Banks from negative up to stable, which is a massive achievement. This means a positive start to the review of Credit Ratings, and maybe securing SA to stay above the feared #JunkStatus from Moody's - a decision which is coming next month.

And Ramaphosa tried to reassure that there will be no 'land grabs' as a result of the EWC debate, hoping to calm the nerves of investors internationally...

Along with that, July's local manufacturing data surprised at 1.6% month on month.

On the back of this, the Rand pulled some solid moves through Wednesday and Thursday, breaking as low as R14.62! 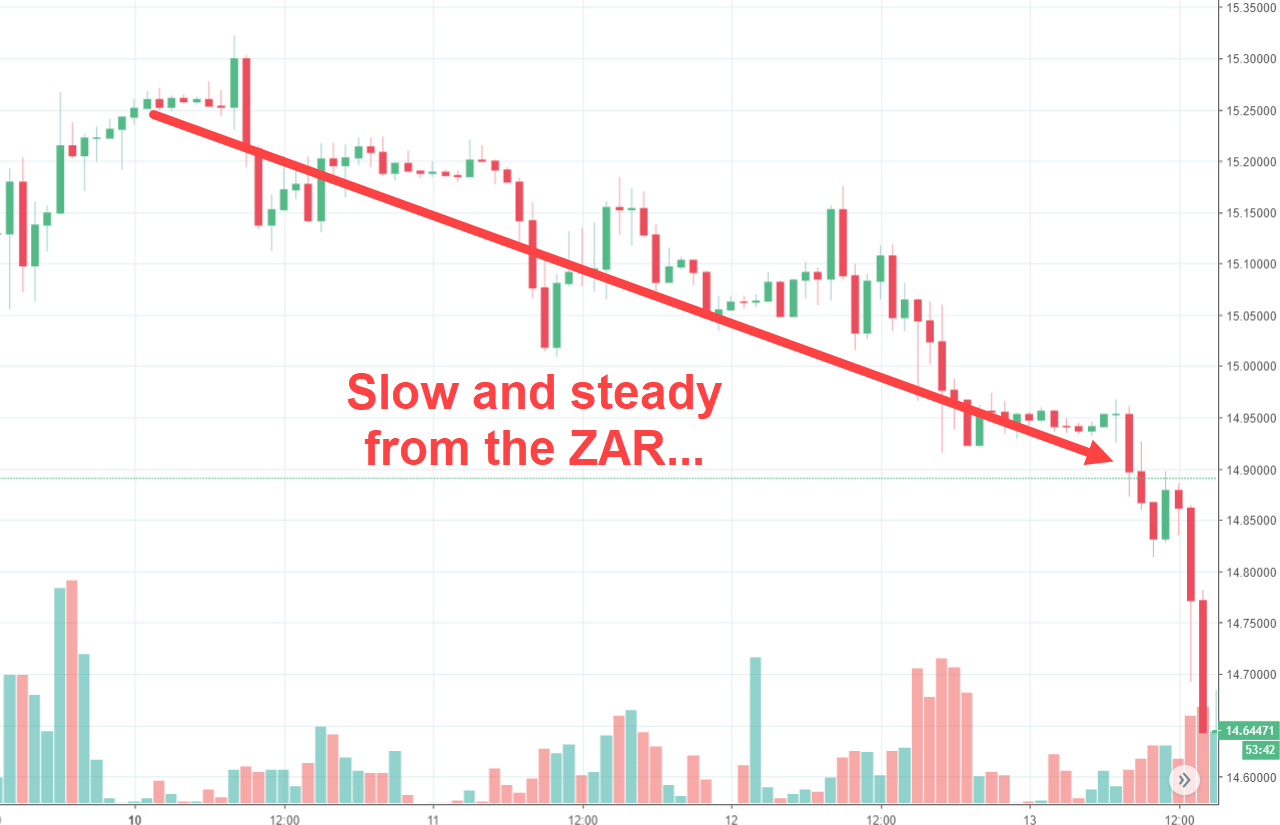 As for the Rand, the tables turned a bit once again on Thursday and Friday, as we saw the market retreat back toward R15/$, losing over 30c in 2 days...

...it was a softer end to the week for the Rand as it closed around R14.95, but on the whole, a pretty successful one.

The Rand has dealt with early trade pretty well, pulling back after losing ground initially.

The local currency has some potential hurdles to overcome, an interest rate decision being one of them, with MPC sitting between a rock and a hard place, with the need for some relief needed to foster some much-need growth on the one hand, and inflationary pressures from Rand weakness and petrol prices on the other.

And, of course, that is apart from any new storms erupting from Trump's tweets...

The preferred wave count has been rather hazy the past month or so, but it is starting to show its hand and the next couple of weeks could be interesting indeed, if it plays out as expected.

We will be watching it closely - and suggest you follow along with us if you have any interest or exposure in the markets, with our 14 day free trial of our forecasts - just use the button below!

Alex Paynter
« Previous Post Recession drives the Rand to worst level of 2018 Next Post » Rand comes roaring back to win the week!