Another intriguing week passes us by, with global events and news taking centre stage as the Rand melted weaker and weaker...

It has been an incredible turn of 'fortune' for the ZAR, which has left many economists even more stumped - they didn't understand why the Rand strengthened towards R16.30, and now they are befuddled as to why it has suddenly crashed into the high R17s...

The key thing to understand is this:

Economic, political and social events are mostly noise (and sometimes triggers) and a source of information for economists to blame for market moves ... after the fact.

But that doesn't really help anyone, when it is too late, does it?

The fact is, you do not need to know what events are coming - what you need to know is what the market itself is telling you as to where it is likely to head next, based on past sentiment patterns and cycles.

This allows you to make decisions and take action - at the right time!

Once you understand that, you will look at the market in a different light.

This week's review will provide a classic example of this.

So let's get into the full review to show how we saw this all playing out...

So, before we hit the road running into the week, we had already released a forecast at the market close on Friday. The Rand sat at R17.07 to the Dollar, after having already weakened 70c during the days prior.

At this point, the outlook was for the Rand to weaken even higher, to test upwards of R17.20, and possibly R17.70… (see below the forecast - click to enlarge)

It was certainly going to be an interesting few days!

And here were some of the biggest events as the global outlook took centre stage:

So, right from the start of the week, the ZAR was on the back foot - and based on our forecasts, this was expected to continue.

The markets were greeted with Trump suggesting a possible delay in the November election, as a result of all the trouble the virus has caused, and the uncertainty around the accuracy of mail-in voting...

One thing is sure - the US election is going to be a massive market trigger as we head into the final 3 months before D-day...

Also in the US was the rising animosity between itself and China - or more accurately, the Chinese Communist Party, with the two are a far cry from where they were when the Trade deal was signed just before the pandemic became public.

Its been brewing for a few weeks now, but finally on Thursday an order was signed to ban the Chinese social media app, TikTok, drawing criticism and anger from the Chinese Communist Party. This has clearly been a systematic targeting of the Communist regime from the US that has been going on for the last few months in retaliation to the pandemic which started there - but all the actions so far have certainly been for the best and have been justifiable.

What this means for the markets is more what effect it is going to have on the trade deal, as the two nations have agreed to meet and discuss the deal during the course of this coming week - who knows what will follow...

It also seems the start of a tariff war between Canada and the US is starting to brew, with Canada in retaliation imposing tariffs on $2.7bn in US goods...

So as all of this played out, the Rand continued to zig-zag its way weaker against the Dollar, breaking clear into the target area, exactly as per our forecast from Friday. 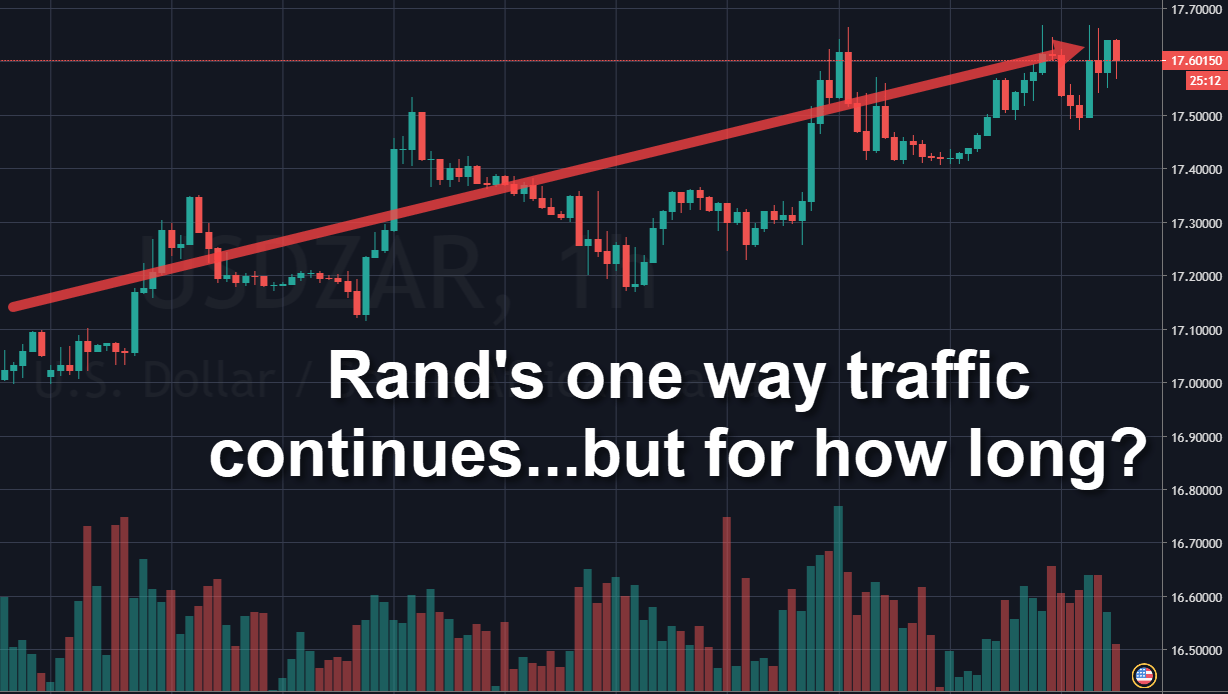 Our Elliott Wave based forecasting system had called it again, as we saw the USDZAR break now almost 140c from its strongest level just a few weeks ago!

Back to the Rand, we saw the local currency spiral its way up to touch as high as R17.68, and some resistance seeming to form there with 3 failed breaks of 17.70 through Thursday and Friday.

This was in line with the next forecast which we had released on Wednesday, showing that we expected the Rand to make another stab higher into the 17.64-18.02 area before we would then see it topping out (in the short term). Take a look at our forecast below, and click to enlarge it:

What had been quite a week, eventually came to a close with the USDZAR closing around R17.58/$...and pushing a few cents higher after the SA close

As we look to the week ahead, we have several important events coming up over the next few days:

Some of the more interesting ones are certainly going to be the unemployment figures locally as well as the GDP figures from the UK & EU.

And not to forget the ongoing stimulus situation in the US, which stalled badly through this last week.

So, with all these events, where will this leave the Rand?

The Rand has taken a pounding the past 2 weeks, and while it is looking toppish short-term, market volatility is unlikely to subside.

When the market is highly volatile, it is extremely difficult to make rational and educated decisions that often mean doing the opposite of what your emotions are telling you.