It turned out that it really was the calm before the storm...

As our last Rand Review had it "Rand momentum continues...but for how long?" - this was not an unfounded question, as our charts were suggesting there was no other way but for the market to retrace.

The move down was overextended, without a retracement. And so, all it needed was a couple of nice triggers, and bam! Back over R14/$ we were - in fact a long way over - hitting R14.30 on Friday.

And guess what? Our forecasts showed this too...

But let's get into the full detail...

...and get some more understanding of how human psychology works against us making the right decisions in markets.

The week began with our updated Shot Term forecast on Friday, 19 July for the next few days ahead.

A bold forecast indeed after a few weeks worth of relentless Rand strength.

It looked like we were in for quite a week....

And so it turned out, with some big headlines:

- the new bailout from for Eskom has not gone down well with the public, and more importantly, neither with Moody's credit agency...

The market opened on Monday with good momentum on The Rand's side once more, after a very strong couple of weeks.

The USDZAR had been trading mostly beneath R14 for almost 2 weeks, and many were starting to become mildly euphoric, that the Rand was just riding global news without any bother.

Before the change of trend, complacency and euphoria sets in.

But it is impossible to tell by looking at the news when this moment is. Thankfully, we had the Elliott Wave for that...and it was calling a bottoming out very soon.

So, the first half of the week, the calm continued as the market range traded in a tight band of 10c or so.

On Wednesday, we issued another update, reaffirming our count from Friday:

And the calm continued...until Thursday

And that was when it all changed.

Moody's decided it was time to comment on the Eskom situation which had been playing out in Parliament during the week.

There was an discussion around the R17bn which Eskom had just been bailed out with at the drop of a hat, unbeknown to many...and then that was followed by a proposal from Finance Minister Mboweni to give an additional R59bn to Eskom in funding over the next 2 years.

This did not go down well with Moody's.

They warned that this was "credit negative", as well as the “room to maneuver is extremely constrained,” for the South African government's budget.

And that was the trigger the Rand needed: 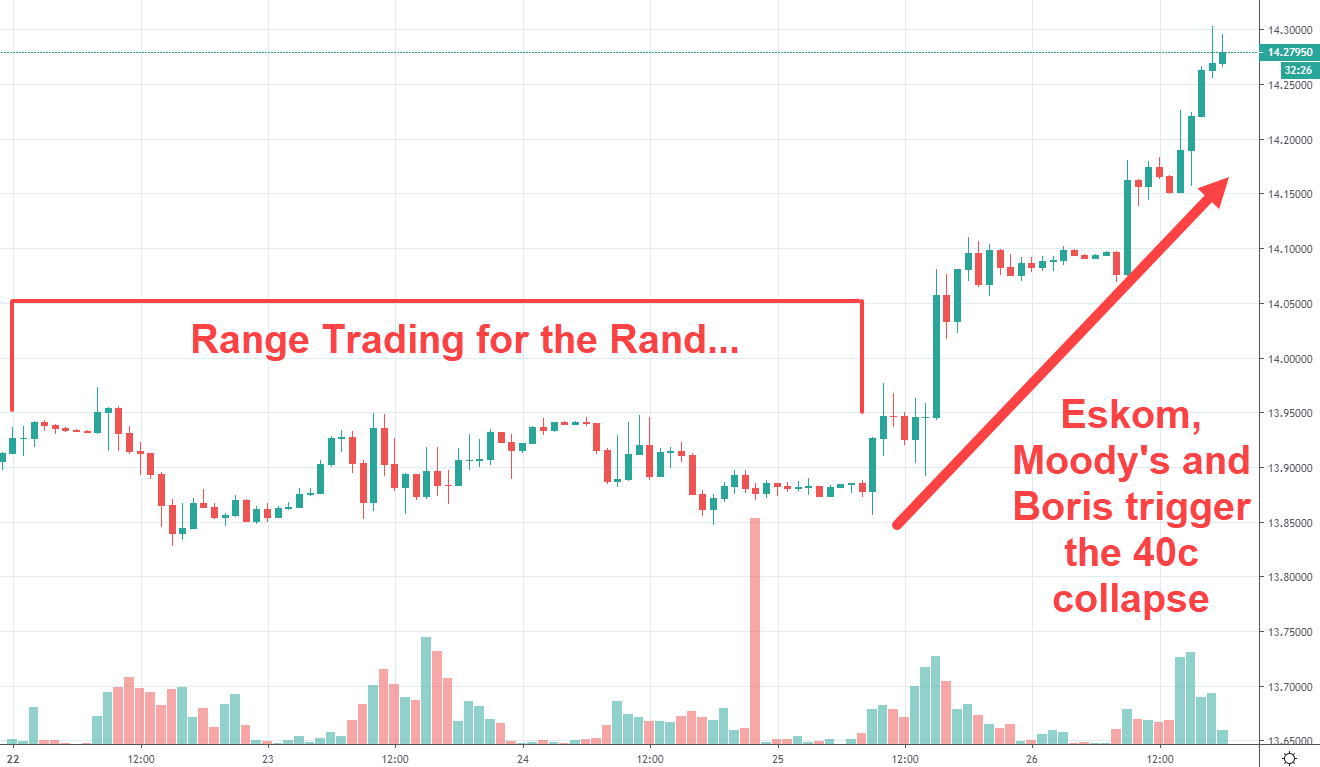 An absolute explosion happened over Thursday and Friday as we saw the market springboard 30c higher!

Who could have called it, but the Elliott Wave?

The Rand had ridden bad news over the last month with little to no reaction.

Suddenly this trigger does it...

Simply because, this time (based on the Elliott Wave analysis), sentiment was at an extreme, and the next big move therefore was going to beup ... not down.

In other news across the globe:

...and in so doing, wiping out the past 3 weeks of gains.

So, the undisputed loser of the week?

And the undisputed winner?

For the first time in many weeks, the Rand starts the week on the back foot, as we close off July and head into August (can you believe it?)

And it is expected to be a week of note, with lots of big-mover economic news events which could provide triggers for moves, being among others:

We have seen last week once again (we seem to be repeating ourselves often, but this is SO IMPORTANT) that these events cannot provide us with consistent direction, but are merely triggers for the underlying sentiment..

...and all financial markets are moved by mass human sentiment.

By analyzing these sentiment patterns using the Elliott Wave Principle (together with our unique combination of momentum, time and price-relationship studies), we are able to come up with where this sentiment is likely to take the market - in smaller and larger timeframes.

So, I trust you weren't caught out by last week's 'surprise' move - if so, you need to look at your strategy and see where you went wrong, as this was imminent.

To get a look at where we are expecting the market to head this week, click the link below.